Why is Sonic so fast?

As we all know, Sonic the Hedgehog is the main protagonist of the Sega game series of the same name. 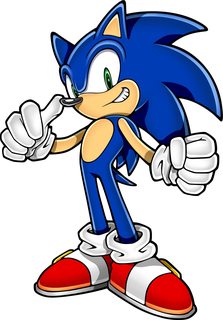 What I've always wondered is, what makes Sonic so fast?

Obviously the out-of-universe answer is that his games are 'speed based' where the player needs to react fast in order to do well, but I'm looking for an in-universe answer.

I know that in some iterations there's mention of his shoes making him fast, and according to other sources, it's just because he inherently is fast, that's all:

In fact, in many of the iterations of the game, there are 'power ups' which grant Sonic even greater speed, but I've not seen anything official about the origins of this speed. Is there any official explanation given for Sonic's speed?

In short, Sonic was already pretty fast (for a hedgehog) when he first encountered Dr Robotnik.

"The fastest hedgehog on the planet" 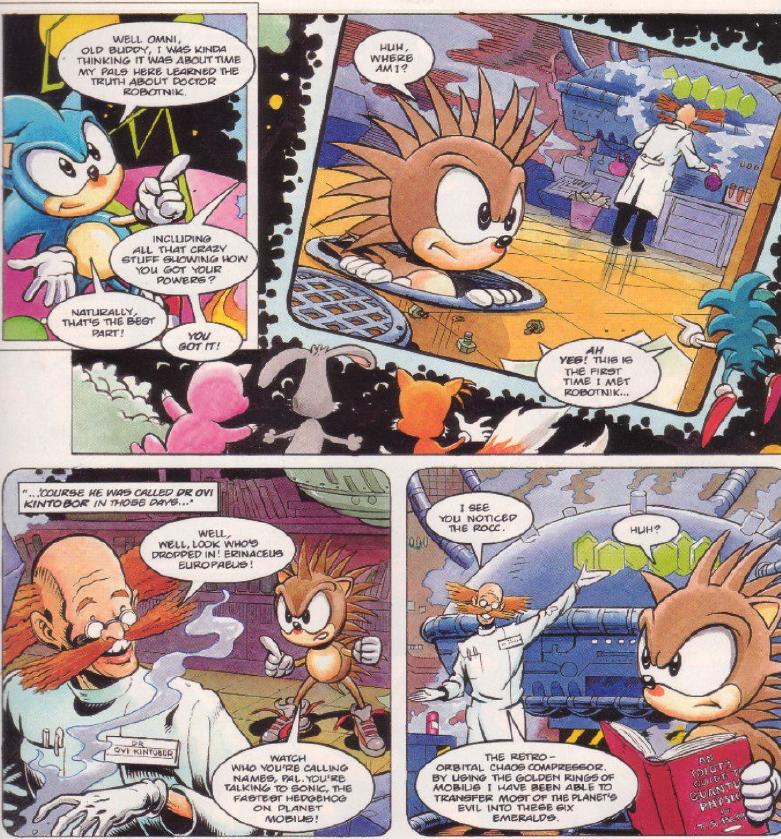 Robotnik provided him with "power sneakers" and allowed him to train on his "kinetic gyratoscope", resulting in Sonic being able to run at super-sonic speed. 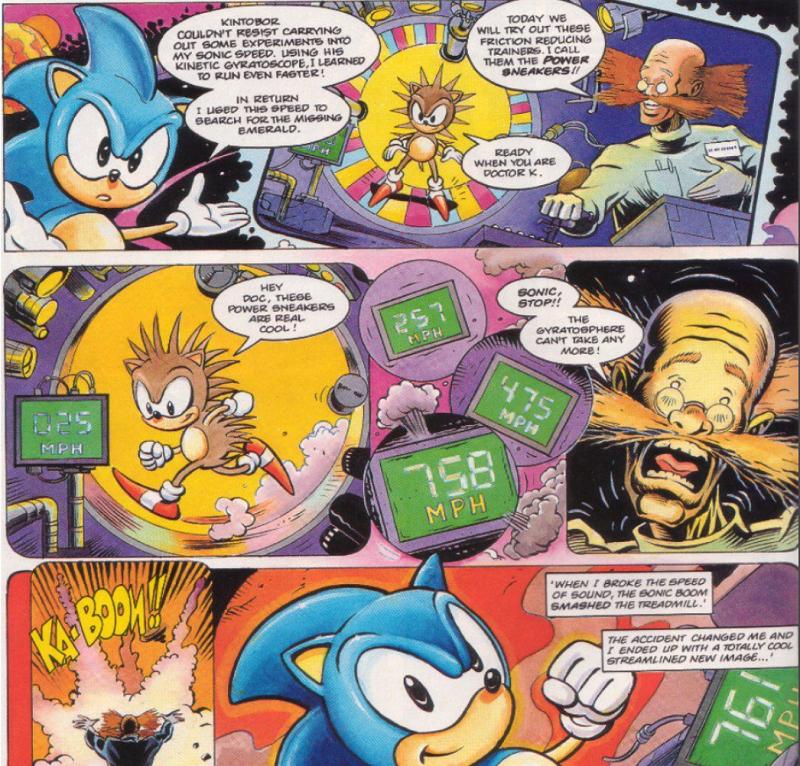 The comic itself is a retelling of an earlier work; The licensed book Stay Sonic

Partly out of curiosity, and partly to assist Dr K in his research, Sonic put in several hours a day on a solar-powered treadmill that the Doc had built for him. The treadmill, or Kinetic Gyratosphere™ to give it its patented name, was capable of revolving at high speeds. Sonic protested that it made him feel like a gerbil on steroids. However, when Kintobor developed special friction-reducing trainers for him he became more interested. The cutting edge design and classic red styling hid some state of the art additions including Duratex™ soles with exceptional grip and specially cushioned odourless inners. Covering as much ground at the speeds he did frequently left him with blistered feel. They were also a necessary safety measure because Sonic started to build up the sort of static that could ignite the treadmill or shoot sparks into the lab. Gradually Sonic increased his speed to 200, 400, then 500 mph.

Kintobor torqued up the treadmill every day, pushing it in 20-mile-on-hour increments What hod begun as an idle exercise was developing into a majorly phenomenal experiment Then one day, impossibly. Sonic crossed all known limits of mammalian acceleration and broke the sound barrier The treadmill had been running for thirty-five minutes and he was little more than a blur when suddenly there was an enormous bang and a tremendous wind swept all the papers into the air. Alarmed, Kintobor attempted to slow down the treadmill - stopping it dead would have had disastrous consequences, probably sending Sonic into orbit over Mobius. Eventually he managed to gain control of the machine and gradually reduce Sonic's velocity, but it took nearly an hour to bring it to a stop

When, finally, Sonic stepped breathlessly out of the treadmill he wasn't the same hedgehog that had gone in. His physical appearance had changed dramatically. Instead of his unexceptional, greyish-brown shade., most of Sonic's body had turned brilliant, cobalt blue, on his spikes stood straight back in a stiff mohawk

My word!' exclaimed Kintobor, struggling to comprehend what had just happened I think you've gone blue from the shock waves Not to mention the Cobalt Effect™' he said

You clocked up 761 miles per hour! You've really earned your name now! In fact, I should call you SuperSonic - what do you think of that?' Kintobor cried, dancing around the lab like a demented, er, scientist.

SuperSonic, yeah - radical Cool.' grinned Sonic, examining his glowing blue body proudly in a mirror, but what about getting some food? All that running's made me hungry!'

Still, he knew he'd never be a nerd like Dr. K. So partly for relaxation, and partly for Dr. K's amusement, he logged in several hours a day on the supersonic treadmill that Kintobor had -built for him. Slowly, Sonny built his speed to 200 , 400, then 761 m.p.h. -- the speed of sound. Then, impossibly, he crossed all known limits of acceleration and began running at the speed of light. Alarmed, Kintobor tried to slow the treadmill. Although he managed to gain control of the machine and bring his friend's velocity down slowly, a change had come over Sonny. Instead of his unexceptional, grayish-brown color, most of his body had turned cobalt blue, and his quills stood straight back in a stiff mohawk.

"My word!" exclaimed Kintobor, who struggled to comprehend what had just happened. "1 think you've gone blue from the Advanced Non- Concussive Cobalt Effect!" he said, helping Sonny from the treadmill.

" 186 thousand miles per second! You're so fast, we should call you Sonic. SuperSonic, even. How do like that!" he cried, dancing around the lab like a demented pixie.

In most continuities I can think of, including the current game canon, no explanation is ever given for Sonic's super-speed. He just naturally is that fast. In Sonic Underground he's shown to be unnaturally fast even as a toddler (though admittedly, Underground isn't exactly the most accurate Sonic adaptation). It should be noted that the backstory given in "The Origin of Sonic", as posted by Valorum:

a) Only applied in the West (SEGA of Japan used a different backstory because the two regional branches of SEGA didn't see eye-to-eye back then)
b) Ceased to be canon, to the best of my knowledge, when the two regional continuities were combined starting with Sonic Adventure.

The only other continuity I know of in which Sonic's speed is explained to some extent is the cartoon Adventures of Sonic the Hedgehog. In the episode "The Mystery of the Missing Hi-tops", Sonic's distinctive red sneakers are stolen and he is left unable to run, as without them, his feet burn up. But even there, Sonic's speed is apparently all-natural, he just can't utilize it properly without the shoes.

Well, if we go by the Archie Sonic comics story line (which is not canon), Shadow, Silver and some other characters have their special abilities due to the Chaos Force, so I assume it applies to Sonic as well.

Sonic is fast because of multiple reasons, it just depends on if you're talking about the shows, games, or comics.

With the comics it is because of his genes. It basically runs in his DNA and most of the other hedgehogs' DNA. Hedgehogs in the comics naturally have some speed, they just have to work to develop it.

Now if you're talking about the shows, yes he is still born with it, but it most likely does not run in the family (he was the first one with speed in his family to be a speedster).

And finally if you're talking about the games, he gets it from the Chaos Force, because the games most likely followed the elements of the comics. It was because his father was a chaos user and it might have transferred into speed for the Chaos Force ability he would have had.

So basically, no, the shoes are not what makes him fast, they just help with the fact that he is so fast.

user96037user96037
1
2
Add a comment  |
Highly active question. Earn 10 reputation (not counting the association bonus) in order to answer this question. The reputation requirement helps protect this question from spam and non-answer activity.

30
What is Sonic the Hedgehog's maximum running speed?
4
Is the world Sonic lives in technologically advanced?

30
What is Sonic the Hedgehog's maximum running speed?
4
Is the world Sonic lives in technologically advanced?
3
What's the farthest distance Sonic the Hedgehog has ever run?
6
Is Shadow faster than Sonic?
5
How does Sonic know what Wi-Fi and the Internet are?
3
Identify a Sonic game which featured Silver in a dystopian future