How did Arrakis become a desert devoid of oxygen and then habitable again?

I'm just starting with the original novel but have an interest in desert planets so bear with me please.

It seems the sandworms are responsible for Arrakis becoming a desert planet:

The sandtrout [...] was introduced here from some other place. This was a wet planet then. They proliferated beyond the capability of existing ecosystems to deal with them. Sandtrout encysted the available free water, made this a desert planet [...] and they did it to survive. In a planet sufficiently dry, they could move to their sandworm phase.

OK so the sandworms are responsible for the water being under ground.

And then another explanation:

The non-canon Dune Encyclopedia (1984) theorizes that the depletion of the oceans (the primary result of which was desertification) was probably caused by the impact or near miss of a comet or other quasi-planetary body. This event caused the loss of much of the atmosphere of Arrakis, allowing most of the oxygen and water to escape into space. This is thought to have occurred approximately 50 million years before the Imperium's creation. This catastrophic loss of oxygen led to the extinction of nearly all native fauna and then therefore the flora.

OK I get that. But now the sandworms are back:

The Encyclopedia also explains that one of the few forms to survive were tiny worms of the phylum Protochordata. One of these forms was Shaihuludata, a genus of anaerobic burrowing worm that was the basal species from which the giant sandworms (Geonemotodium arraknis or Shaihuludata gigantica) evolved. Rather than sandworm creating desert, it was desert that created sandworm. The mass extinction of all of its predators and competitors for food allowed the animal, in a manner somewhat analogous to the evolution of unique faunal forms on isolated Terran islands, to take the evolutionary path that would not only re-oxygenate the Arrakeen atmosphere, but also create the spice melange with all of its immense consequences for humanity.

OK now instead of killing all life on the planet they re-oxygenated the atmosphere and (seemingly) brought biological life forms back at the same time. Again, how would they have made that happen without water?

Sandtrout encysted the available free water, made this a desert planet [...] and they did it to survive. In a planet sufficiently dry, they could move to their sandworm phase.

But how would the sandworms have accomplished that?

We got Blue Whales from that? Giant sand worms from trout? Sure.

As for changing the makeup of an entire planet, here on Earth these tiny cyanobacteria (ie. blue-green algae) were responsible for oxygenating our planet. 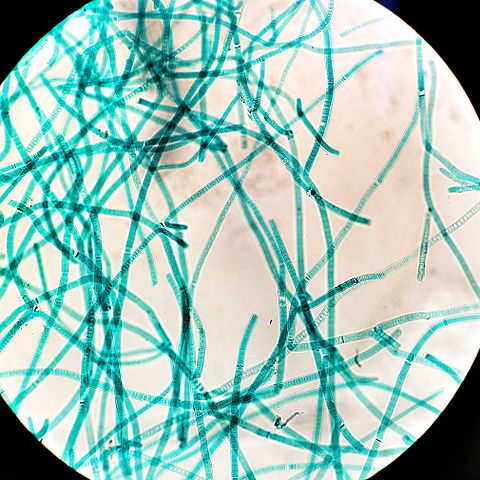 So sure, a single species could be responsible for locking all the free water up underground.

Shaihuludata, a genus of anaerobic burrowing worm that was the basal species from which the giant sandworms...

An anaerobic organism is one that does not require oxygen for growth.

in a manner somewhat analogous to the evolution of unique faunal forms on isolated Terran islands, to take the evolutionary path that would not only re-oxygenate the Arrakeen atmosphere, but also create the spice melange with all of its immense consequences for humanity.

Presumably, Shaihuludata gigantica expels oxygen and melange as part of its respiratory process.

Shaihuludata gigantica takes in... something and expels oxygen and melange. I don't know of any Earthly non-photosynthesizing anaerobic process that expels oxygen, but hey, it's an alien. Some will expel water, which might then be split by some geological or biological process to hydrogen and oxygen.

The problem is the time scale, 50 million years is a bit quick. Our oxygenation took about 2.5 billion years. OTOH a lot of that was spent saturating the oceans and land surface with oxygen. If Arrakis was once oxygenated, these oxygen sinks might already be full and the process would "only" have to fill the atmosphere.

Given the non-canonical nature of the Encyclopedia, it is difficult to come up with any explanation beyond what is provided in your quote. The encyclopedia is directly at odds with the published books. That said, I'm willing to provide a (wild) hypothesis.

Things we know, within the non-canonical Encyclopedia's version of events.

To re-oxygenate the atmosphere, we really need something to photosynthesize. This could be another creature on the planet, which does not compete with the Shaihuludata, though this seems to negate the fact they were involved according to the provided quote.

The worm could have evolved photosynthesis on it's own, but this seems unlikely, as that kind of food/energy change in an existing multi-cellular organism is unheard of.

One option, which seems more likely, is that the Shaihuludata evolved into a symbiotic relationship with some form of bacteria. Similar to how the Giant Tube Worm has evolved symbiosis with chemosynthetic bacteria that also grow around their ocean vents. The symbiosis must be two-way, so that we could in some form state that the Shaihuludata was "responsible" for the re-oxygenation by supporting or even "farming" this unnamed bacteria.

It's possible (even likely) that this theoretical bacteria would be some form of Lithotrope. Using the abundant sunlight and minerals present on Arrakis to provide energy for the Shaihuludata. This interaction could form the basis for a whole colony-ecosystem, leading to the evolution or (more likely) adaptation of other related flora/fauna.

24
How did the sandworms and sandtrout appear on Arrakis?
32
Why did the emperor send the Atreides to Arrakis, then the Sardaukar to remove them?
14
How did Duncan Idaho become so familiar with the fremen
6
How did anyone know the headless body found in the desert was Fremen?
12
How did the Harkonnens gain stewardship of Arrakis?
12
How many men did Duke Leto have on Arrakis?
14
How did Dr. Yueh know Jessica and Paul would be sent to the desert?
20
How would the Bene Gesserit get their hands on worm bile?