Something something: and the Scourge of (Rykard?) [duplicate]

Ask Question
Asked 5 years ago
Modified 5 years ago
Viewed 94 times
4
This question already has an answer here:
Looking for a book about a slave that gathers friends and goes into a desert to find a dragon (1 answer)
Closed 5 years ago.

I had a wonderful fantasy book, which was part of a series, in the mid '90s. On the cover was a man that looked like Kratos from God of War. In the story, he at one point got a gem shoved into his chest by an old wizard that was giving him powers and glowing. WTF is this book? I can't find it ANYWHERE on the internet. HELP!

I haven't read the book you are referencing, but a bit of Googling points me towards the Dark Sun series.

One of the books in the series, The Crimson Legion, features a fairly God-of-War-esque character on the cover. 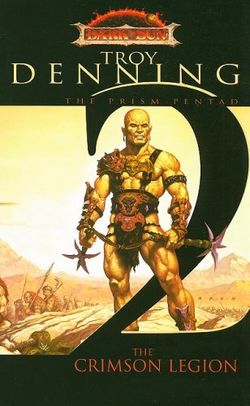 The Dark Sun series features a sword known as the Scourge of Rkard, so named because the sword (previously known just as the 'Scourge') was used to kill a character named Rkard.

There's no information I could find quickly about a character gaining powers by having a gem pressed into their chest, but that is a fairly common trope of the genre, so it seems possible.

4
Looking for a book about a slave that gathers friends and goes into a desert to find a dragon
9
Fantasy novel where characters have gemstones implanted in their bodies. Female baddie is trying to 'harvest' them

4
Paperback novel about a man who kills a birdlike alien on his balcony with a watering can
10
Berries to beat mind-control
17
Fantasy Novel about a man named Q-something who finds a glowing rock in a pool and becomes king
7
Fantasy or sci-fi book involving cats and their philosophy
3
Old sci-fi book where a man is transported to another world, and meets woman with green skin. Involves black floating transport?
9
Movie/TV show about people living in a fortress-like city, surrounded by a wasteland populated by violent, mutated humans