In the episode, The Aftermath the Metalbending Police Force has been investigating Future Industries factories for collusion and production of weapons by Hiroshi Sato with the Equalists.

It is later discovered that Hiroshi Sato was producing weapons in a secret factory beneath his home and Korra, Tenzin and Lin investigate that factory in a search with the Metalbending Police Forces. This search reveals the latest secret weapon of the Equalists, the Mecha Tanks. The mecha tanks, which are controlled by Equalists from the inside, attacked Korra and the other intruders. The mechs were easily able to knock Korra, Tenzin, Lin, and the other police officers unconscious during the battle. Korra, Tenzin, and Lin, however, were rescued by Bolin and Mako while the Equalists were busy loading the police officers into their trucks. Sato reveals the tanks are made of pure platinum and unable to be affected by metalbending arts.

The Equalist devices appear very similar to the steampunk-style Big Daddy and Handyman from the Bioshock video game series. In real life, platinum is a very malleable metal, almost as soft as gold, and would be useless as armor (although the lack of firearms might render this less of an issue). In addition, platinum is very expensive, furthering it's usage in armor being problematic at best.

So how do we explain:

I understand any answers that are generated will be speculation, so what I am seeking is intelligent speculation that treats this as a serious question that expands the discourse on the Avatar world.

Expanding on Balto's answer, a brief primer on the origins of metalbending might be in order. While Toph was locked in a box, Guru Pathik was remarking to Aang:

Even the separation of the four elements is an illusion [...] metal is just a part of Earth that has been purified and refined.

As she struck the inside of her metal cage attempting to see as best as she can, her seismic sense allowed her to see into the metal and reveal its impurities. Given the apparent level of technology at that point, bulk cast metals were likely of terrible quality, so they still had lots of "Earthiness". 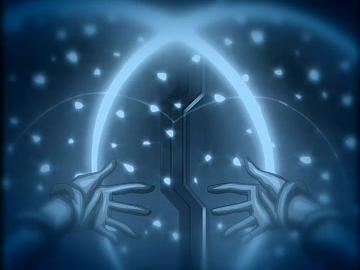 Toph was also shown to bend some very impure metal (a meteorite fragment) with apparent ease into a variety of shapes (like the Nickelodeon logo...). Conversely, when trapped in a wooden cage with Katara, didn't use their gold jewelry, which even given the terrible manufacturing techniques could still be quite pure, to try to break out.

Platinum, like gold, is a noble metal; it is highly unreactive and can be found in nature in it's native state. The base metals, like iron, copper, and tin, need to be smelted from ore, which reduces a mineral into a metal. So owing to its chemical nature, purifying platinum is far easier and the amount of "earth" left afterwards could be orders of magnitude lower than with steel.

Additionally, platinum is about twice as strong as gold and its Mohs hardness is about 1.5 higher. The US Mint actually strikes it's platinum coins three times versus two for gold to obtain a sharp image.

In any event, the sheer amount of platinum pictured in that one scene is likely more than has ever been mined on (our) Earth, which fits in a 6.3 × 6.3 × 6.3 meter cube. That places the world of Avatar somewhere far, far away.

I would think that the only reason earthbenders bend metal is because of the carbon impurities inside the metal as shown in the episode of the last airbender when Toph used her seismic sense to see the microscopic pieces of soil inside the metal. Platinum is one of the purest metals known so without any carbon impurities it'd be impossible to bend that kind of metal. I think that pure metals aren't totally immune to earthbending knowing that all metals has some percentage of impurities but it would depend on how skilled the bender is to be able to bend purer metals than iron.

They can only bend the tiny impurities inside metal which are earth. Hiroshi Sato created the machines out of metal with absolutely no earth in them.

Yes, metalbenders can bend platinum but none has ever done so. Platinum is very pure and thus it would take an extremely skilled and focused metalbender, even more skilled than Toph.

For example Sozin was an extremely skilled firebender, so he could take the heat from lava, and transfer it to smoke, combustion man could create powerful explosions. Amon could manipulate the blood in the human body and alter the capability, a person has to bend.

The point is that with a highly skilled bender new levels of bending can discovered and explored.

The only way an earth bender bends metal is because he focuses on the earthly impurities in it and bends them, and therefore, bends the metal with it. Platinum has a very small quantity of impurities so it is difficult, yet possible to bend, if there is anyone skilled enough.

Platinum is a noble metal, not a base metal. So in that case a person could theorize that because noble metals are in fact more pure than a base, with less impurities by the nature of their abilities, that they can not bend noble metals.

If you look at the world of Avatar it is a pretty sure thing to say, that their abilities would have been for their protection from the elements.

Water benders in the north and south, air benders up high, and fire and earth below.

The avatar is in between all of these.

kushidokushido
1
1
Add a comment  |
Highly active question. Earn 10 reputation (not counting the association bonus) in order to answer this question. The reputation requirement helps protect this question from spam and non-answer activity.

Not the answer you're looking for? Browse other questions tagged science the-legend-of-korra avatar-the-last-airbender or ask your own question.