Ask Question
Asked 5 years ago
Modified 3 years, 8 months ago
Viewed 260 times
5
This question already has an answer here:
70s or 80s Book. Post Catastrophe, Sheriff tries to hold town together, and keep his schizo wife from killing him (1 answer)
Closed 5 years ago.

Looking for a late 80s novel set in a post-apocalyptic age.

The apocalypse has recently happened, so people remember the old world. I think the apocalypse was that large amounts of the population just lost their minds and become not zombies but just dysfunctionally out of touch.

I remember the main character's wife was half-infected; she could function normally, but she always tried to kill him after sex, forcing him to lock her in a padded room. I remember also he had been a sheriff or police office.

The antagonist was his former partner (I think). I remember the antagonist crept up on a line of men walking through the woods and killed them one at a time from behind.

Most of all, I remember the book had a blurb from Stephen King on the cover, saying either it was the scariest book he had ever read or the author was the future of horror.

As per F1Krazy's comment, this would be the 1990 Among Madmen by Jim Starlin and Daina Graziunas, also the accepted answer to 70s or 80s Book. Post Catastrophe, Sheriff tries to hold town together, and keep his schizo wife from killing him. 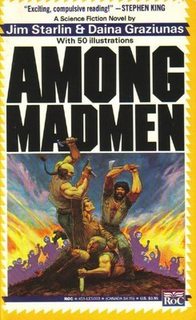 The story of Tom Laker a vet and former NYPD cop who moves with his wife after a virus starts slowly turning the population of into berzerkers. He has become the sheriff of this small town and is trusted to protect the community. Laker is a great character his anguish bleeds off the page. He is trying desperately to hide the fact that his wife has the disease and is at times trying to kill him.

The quote from Stephen King on the cover: "Exciting, compulsive reading!"

9
70s or 80s Book. Post Catastrophe, Sheriff tries to hold town together, and keep his schizo wife from killing him