Why internal lights on space helmets?

I'm currently watching The Expanse series, and I noted a peculiar detail that intrigued me.

The helmets of the space suits have three internal lights (one above the visor, two on the sides) that point towards the face of the characters wearing them, as you can see from this sample screenshot: 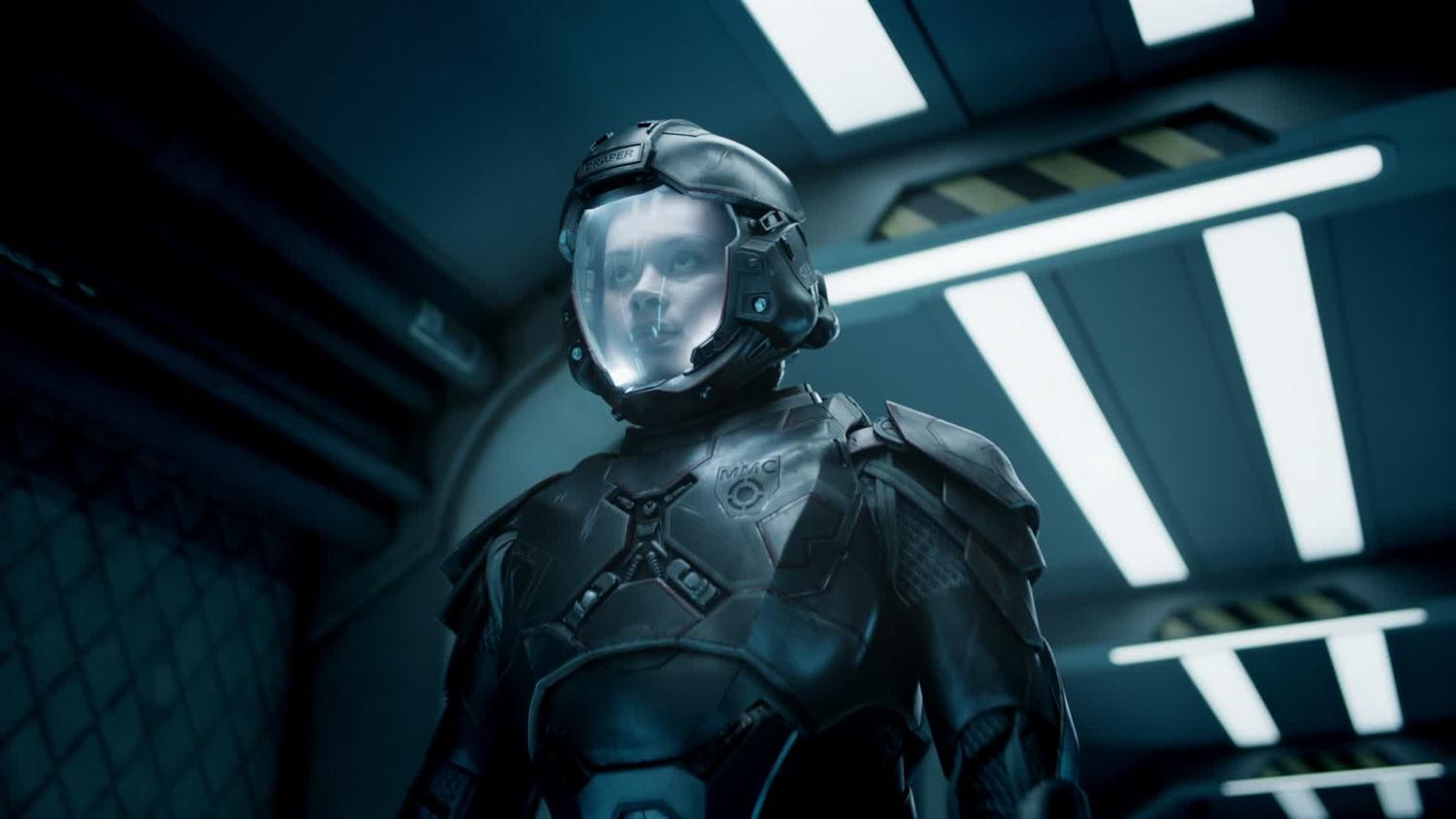 Something similar was used also in Star Trek Enterprise: 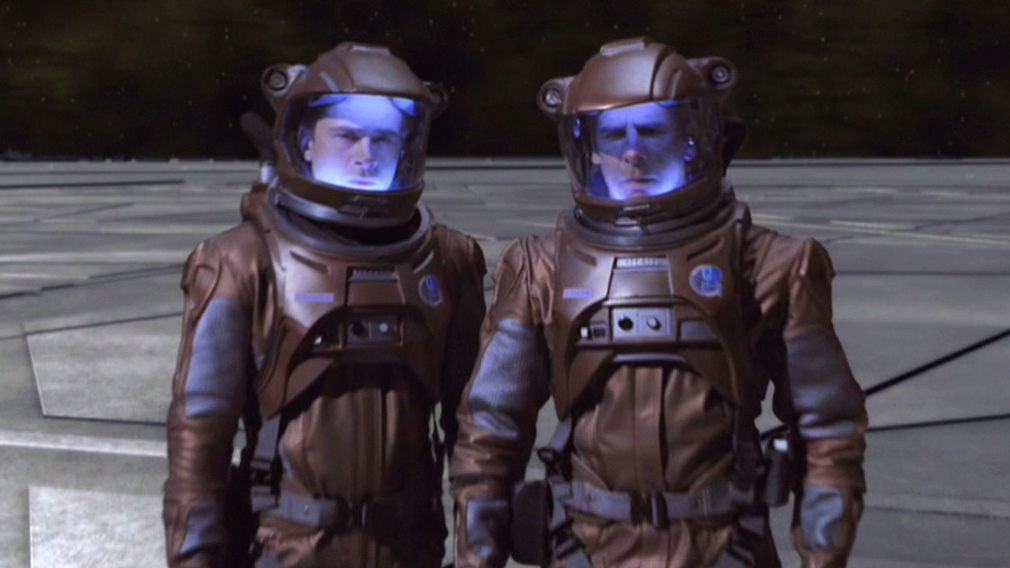 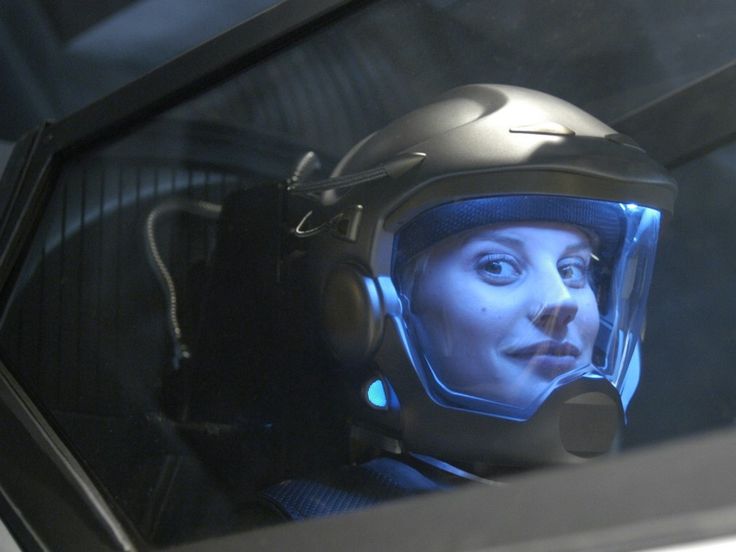 and without a doubt countless other times that I don't recall right now, these are just the examples that came to my mind at the moment.

In the real world, even our astronauts' helmets are equipped with lights, but they are outside and point on the area in front of them, in order to illuminate the zone where they need to work: 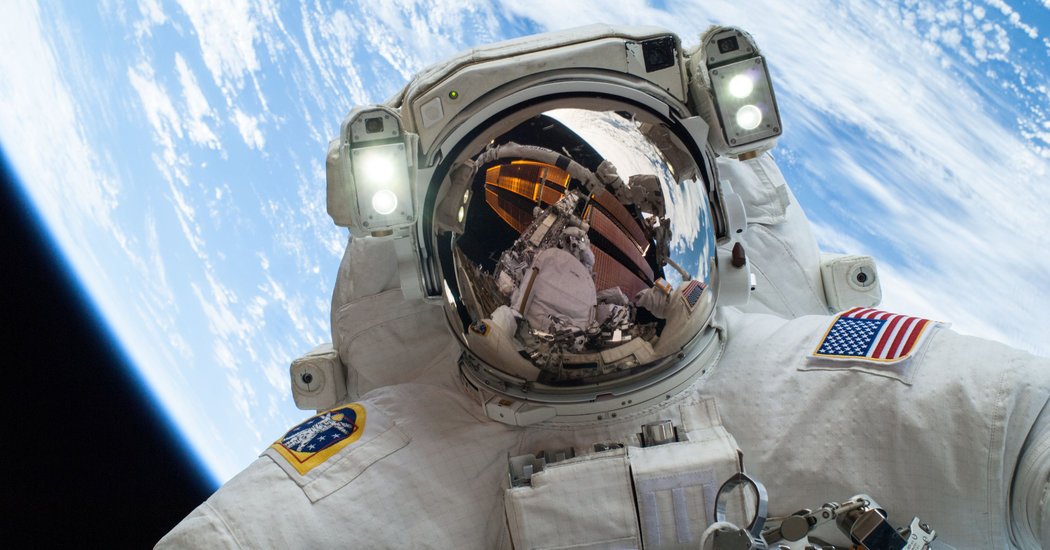 From a production point of view, I suppose that the main reason to have these lights inside an helmet is to give proper illumination to the actors' faces, making it easier to recognize them, to detail their facial expressions in scenes where the light is usually dim; and as a secondary effect, the blueish tone kinda adds some "coolness" and "badassery" to the characters.

But from the fictional, in universe realistic point of view, having three lights, one just a bit above your eyes, and two directly on their side, could certainly help others see you better, but without a doubt will make your sight hampered, causing you more of an annoyance than other.

In The Expanse1, from an in universe point of view, why space helmets have internal lights?
I'm currently reading the novels too, but I don't recall much about this subject being discussed (it is mainly a visual thing). Do the books provide more details about this?

What are the increased benefits that astronauts could possibly receive by accepting the nuisance of some lights pointing directly at their faces?
Being identified by others is not really important as in the production point of view, they could easily do so with identifying plates, distinctive marks on their helmets/suits, the name written somewhere (in The Expanse itself it is written on a plate directly above the visor) and so on. Even our real life astronauts have other means to be identified, since their helmets have a reflective coating to protect them from radiations.

So, why? Is there a reason at all?

1 - I also accept canonical answers from other movies and series, if they could be plausibly be assumed to be a somewhat rational explaination that could be valid in The Expanse too.

This isn't explained in the TV show, and I don't know of any explanations from other movies/series that apply here (although they might exist), so I'll attempt an answer based on the book series that the show is based on. That might allay suspicions that this was solely done as a "TV thing", at least.

Your question is really twofold: Why are the visors not opaque (when viewed from the outside), and why are there lights inside the helmet?

I found a passage in the books that seems to explain both:

The sun had moved behind the planet, so Basia's visor had lost its opacity. He activated the light inside the helmet so she'd be able to see him.
Cibola Burn, Chapter Fifty-One, page 521

Based on this, it seems clear that there are internal lights in helmets, which can be turned on and off at will. Probably with an internal button in the helmet, operated by the chin, which is how many other suit functions are manipulated:

He chinned a button in his helmet, and his body armor shot him full of amphetamines and painkillers.
Caliban's War, Chapter Twenty-Nine, page 318

[…] and the huge woman, who still hadn't given her name, tapped something inside the helmet with her chin and said, "Okay. You're clear."
Caliban's War, Chapter Forty, page 445

Even the color of the internal helmet lights seem to match the ones in your example screenshots:

"Whatever you say, buddy," Amos said. His nose was bleeding again. The blood looked black in the faint blue light inside his helmet.
Caliban's War, Chapter Twenty-One, page 231

As shown in that first quote, at least some helmet visors can change their opacity based on the external light. We can see how this works:

But even through the welder's shield of darkness of the helmet, he could see the column of fire growing, hurling white vapor up until it broke free from the planet's atmosphere and became glittering crystals of ice speeding away from the gravity well like a shower of glass from a bullet-shattered window.
Cibola Burn, Chapter Twenty-Eight, page 288

And here as well – this passage is interesting, since it also seems to imply that the internal helmet lights are either absent or turned off:

Shaded from Ilus' star the polarization of her faceplate faded, and the blue glow of the airlock's LED lights illuminated the inside of her helmet. Her wide smile was clearly visible.
Cibola Burn, Chapter Forty-Three, page 440

From this, a conclusion can be reached: The helmet visors in the books can fade in and out of opacity in order to balance the wearer's need to see the outside clearly, versus their need to not go blind by looking directly at a star/explosion.

This technology might vary from suit to suit. We know that many different suits have this capability as seen above, and we also know that Martian power armor can do it (not surprising, given the level of Martian tech):

Even though there was no way the creature could see it through her helmet's darkened visor, she blew it a kiss.
Caliban's War, Chapter Fifty, page 550

But it also seems that some types of suits have permanently opaque visors, like atmosphere/environment suits:

Alex dropped from the cockpit, face hidden by his helmet, his belly unmistakable even in his atmosphere suit.
Leviathan Wakes, Chapter Forty-One, page 411

Why not have constant opaque visors in all helmets, like the real-life EVA suit you posted has? Well, transparent visors are useful so other people can see your face, both to identify you:

By the time she found the external door into the dome, there was only one other marine left with her. Gourab. Up close, she could see his face through the armored glass of his helmet.
Caliban's War, Chapter One, page 15

He was close enough now that he could see the face behind the helmet.
Cibola Burn, Chapter Twenty-Two, page 226

Bobbie smiled at him, though she didn't know if he could see it through her helmet.
Caliban's War, Chapter Thirty-Eight, page 422

Holden nodded inside his helmet at Kelly, then gestured for him to continue.
Leviathan Wakes, Thirteen, page 141

This brings me to Belters. Martians have the best tech, and Belters have the worst tech. We're not told much about their suits, but it's not far fetched to assume that not all of their suits are equipped with light-sensitive visors (they weld a lot in space, so welders probably have them, as exemplified in the first quote in my answer) and/or radios. Why do I assume they don't always have radios? Because…

Belters have famously created a kind of language consisting of hand gestures to be used in suits, meant to convey information to other people in suits. Of course, the gestures have become so ingrained in Belter culture that they use them even outside of suits:

"We'll already have stopped," Holden said, and McDowell patted at the air with his wide, spidery hands. One of the many Belter gestures that had evolved to be visible when wearing an environment suit.
Leviathan Wakes, Chapter One, page 15

I'm not sure if this implies that no environment suits have transparent visors (like the atmosphere suit Alex is wearing in my quote above?) – Belters usually perform EVAs in suits, so I'm not sure why they'd need an environment suit. Even if they have see-through visors, they probably can't rely on having nice suits with working internal helmet lights, and they can't rely on seeing each other's faces up close all the time. (It's relevant to note that they often don't have radios either, as when they are close to each other they press helmets together to talk through the helmets.)

For Belters, then, internal lights serve little purpose even if they have them. Non-Belters who have spent less time in suits seem to rely more on them:

Havelock shook his head again, this time in mild disbelief. If he'd been a Belter, he'd have made the gesture with his hands, so you could see it when he had an environment suit on.
Leviathan Wakes, Chapter Twelve, page 125

(Here it's important to note that Havelock is probably not used to wearing a suit at all, though.)

Just a small note, since someone in comments asked if the light could be the helmet's internal HUD (if they have HUDs): They do have HUDs, and they do illuminate slightly, but this is (as proved by the above quotes) distinct from the helmets' own internal lights. Here's a scene with a HUD:

The chief engineer bent back. The surface of his helmet glittered for a moment, the HUD taking over.
Cibola Burn, Chapter Twenty-Two, page 224

Not the answer you're looking for? Browse other questions tagged technology the-expanse-2015 the-expanse-novels or ask your own question.

9
How many times has the Doctor worn this orange spacesuit?

18
Why did the Tau'Ri need ZPMs when they had the technology to contruct a power-booster device?
33
Why is water so rare in The Expanse?
22
Why was the Donnager boarded?
12
During the Ganymede attack, why did the destroyed solar mirrors/panels immediately start to fall?
13
Why are there no laser weapons in the Expanse?
5
Why did the protomolecule pull the ships in towards the “station”?
6
Why wasn't speed of particles in engine exhaust limited in the “Slow zone”?
11
Why these hair styles among Belters in the Expanse series?
11
What is a chain code and how do they work?
0
Why don't they put the outer-door release _inside_ the airlock?