What is being eaten by Kirk and company in this scene?

In "By Any Other Name," after the Kelvans have "distilled" nearly the entire crew, Kirk, Spock, McCoy, and Scotty are eating in the dining hall, when a Kelvan walks in. On their plates appear to be colored rocks. What kind of food is this supposed to be? 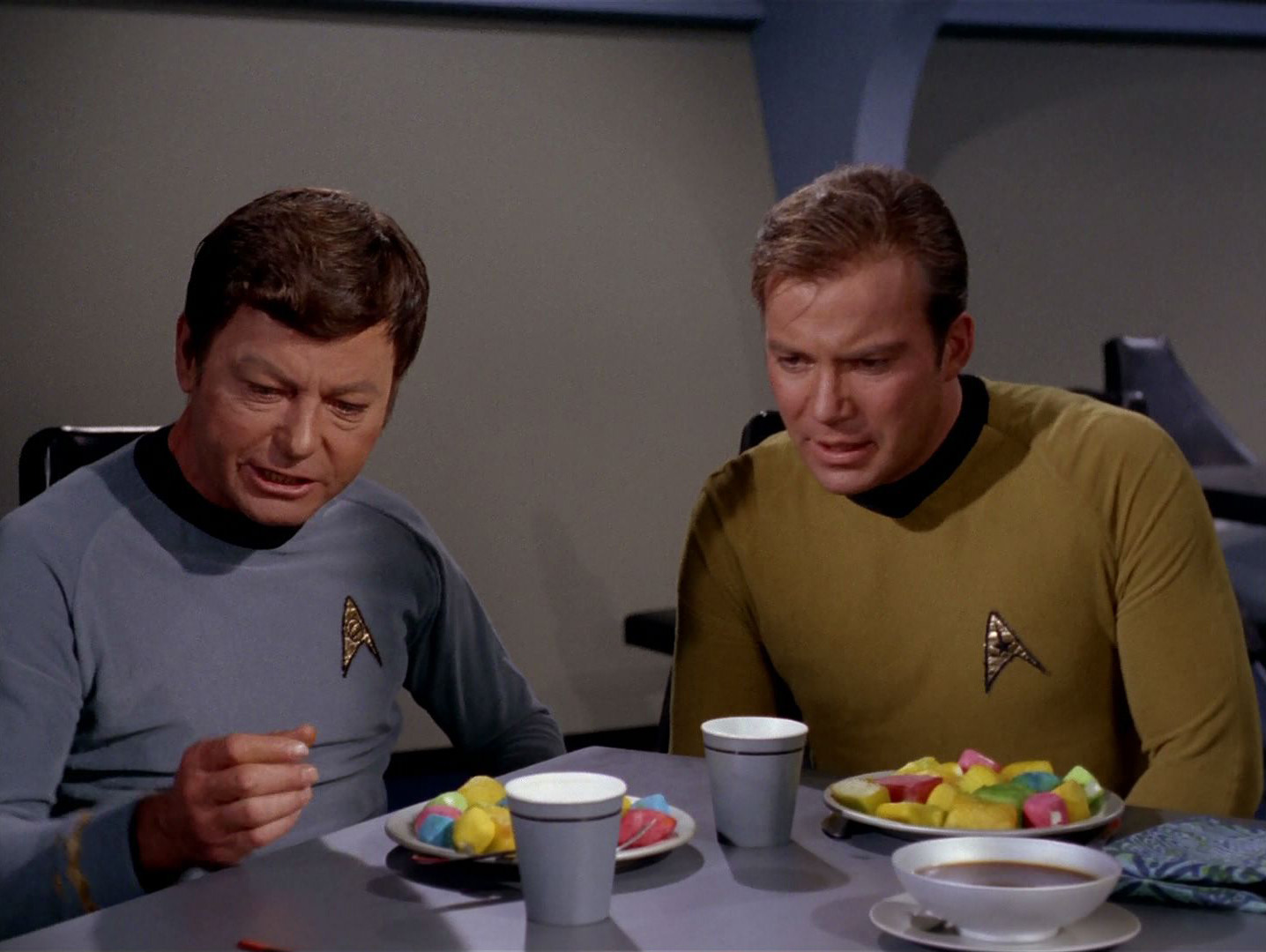 The episode's novelisation merely describes the cubes as 'food'. In the absence of any other description, we can reasonably assume that they're just synthesised 'bulk' matter laced with nice tasting chemicals and vitamins. The black/grey slab on their plates is described as 'meat'.

Note that they appear in other episodes, again simply described as food.

Sickbay was deserted. Kirk found Scott, McCoy and Spock picking at food at a table in the recreation room. Getting himself a tray, he joined them. “Reports, gentlemen?”

Kirk made a quick silencing gesture. Tomar had come in, and was now approaching them, staring curiously at their trays.

“I do not understand,” he said, “why you go to the trouble of consuming this bulk material to sustain yourselves.” He pulled a flat pillbox from a pocket and opened it. “These contain all the required nutritional elements.”

“Not for human forms,” McCoy said. “Bulk is necessary to our digestive systems, and there’s a limit to the amount of energy that can be crammed into a pill, too. Perhaps you haven’t been in human form long enough to find just pills debilitating, but you will-you will.”

11
What do Spock and Kirk eat?

24
Did Kirk and Uhura actually kiss?
8
Would tampering with the visual playback of the bridge log really affect the behavior of a chess game?
30
What happened to the Enterprise crew after TOS?
15
Is there anything more to the way others mistreat Spock?
31
How would Starfleet know what a Romulan looks like in Star Trek 2009?
48
What's the deal with "marshmelons"?
25
Did the creators of Into Darkness research Khan?
16
Who gave Scotty the nickname "Scotty"?
9
Changing mores: Were there any viewer complaints when Dr. McCoy called Mr. Spock a "half-caste" in TOS or did the context make the term excusable?
11
What do Spock and Kirk eat?