It's a book I read when I was a child so I assume it was a children's book (though I'm not certain). EDIT Mostly likely read post 2000, though published date unknown.

The protagonist was male from what I remember from the story and was suffering (maybe from a missing sibling/something family related).

EDIT the protagonist was not an adult, I think he was teenage age.

The main point of the book I remember was something about following a number of steps (maybe 8?) to hell. Following them/saying the steps would lead you to some sort of monster/devil.

I think the steps were in some sort of rhyme - maybe with the lines "step on a crack, break your mother's back", and "no turning back".

The cover was dark coloured I think (red, black, grey).

I believe that you are looking for the book "The Devils Footsteps".

In it there is a series of thirteen stones, that you navigate along with a typical skipping rhyme, that is supposed to tell you when you will die. (Thirteen steps to the Dark Man's door, won't be coming back no more...)

The main protagonist saw a "Dark Man" taking his brother while doing this several years previous, and Bryan (The protagonist) meets some other kids who have lost siblings. He investigates, and the book culminates with a confrontation on the thirteen steps.

It's a YA book that IIRC correctly was a decent read, but I only read it once a while back. Everything in your description fits, it's got a black and dark red cover, missing sibling, skipping rhyme, multiple steps. 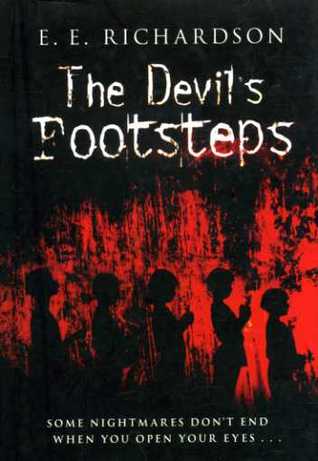 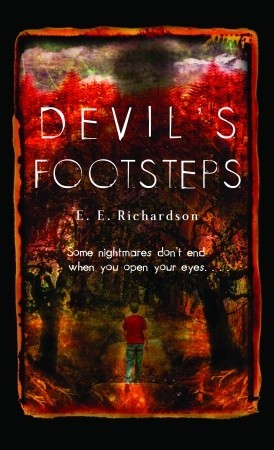 Found it, the book is called The Devil's Footsteps by E. E. Richardson.

From the blurb on Amazon:

"It was just a bit of fun, a local legend. The Devil's Footsteps: thirteen stepping stones (the steps part from my question), and whichever one you stopped on in the rhyme could predict how you would die. A harmless game for kids - and nobody ever died from a game.

But it's not a game to Bryan. He's seen the Dark Man (monster/devil character), because the Dark Man took his brother five years ago (missing sibling aspect). He's tried to tell himself that it was his imagination, that the Devil's Footsteps are just stones and the Dark Man didn't take Adam. But Adam's still gone.

And then Bryan meets two other boys who have their own unsolved mysteries. Someone or something is after the children in the town. And it all comes back to the rhyme that every local child knows by heart: Thirteen steps to the Dark Man's door, Won't be turning back no more . . . (no turning back rhyme) 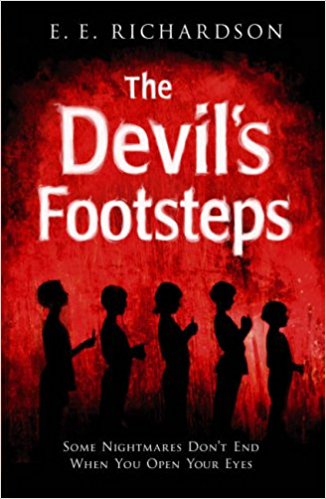 Not the answer you're looking for? Browse other questions tagged story-identification books horror or ask your own question.