Released: Within the last 10 years I think. Was only one book/issue to my knowledge.

A company comes out with glasses that allow their users to overlay/augment the appearance of the world and share those view with other users. The views were created by the creators' imaginations.

The creating company starts forcefully injecting advertisements into the created worlds. Rather than having royalties, etc the company starts having the device listen to what's happening around the users and charging them pennies every time a song is heard (even if it's just someone humming it and not the artist performing it). There are opt-out features for a lot of these issues, but if any show tries to tell users how it gets slowed down or cancelled.

Eventually some people try to stop using the devices, and find that they're now telepathically linked.

The comic is Vision Machine. I was wrong about the number of issues. It was a 3 issue short. However, I read a copy that was all three issues combined in a single volume, hence my confusion. 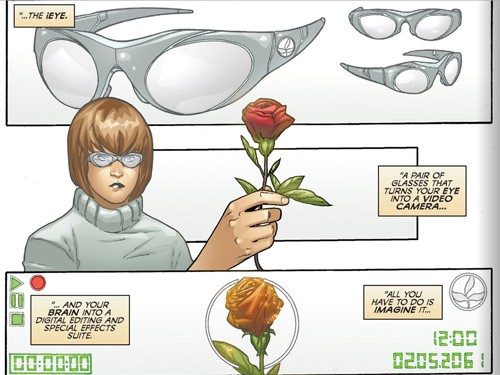 14
What is the Difference Between a Comic and a Graphic Novel?
7
Identify this futuristic graphic novel/comic book focused on interpersonal conflicts
5
Name of comic/graphic novel with circus people
8
Identify story about gaming in a future with augmented reality
10
A sci-fi novel about augmented mental power
10
Novel about a chase around the world with ubiquitous use of Augmented Reality
8
Augmented Reality Novel from the 2010s where reality is blurred