Is there anywhere stating that a member of the Night's Watch had any offspring?

Conceived, of course, while they were under the Night's Watch oath.

If so, what happened? Were they punished?

Oathbreakers count. Since technically having children is breaking the oath anyway.

Other than Mooz's answer, we have Craster, who was fathered by some Crow.

Sam looked around anxiously, but Craster had not returned to the hall. If he had, things might have grown ugly. The wildling hated bastards, though the rangers said he was baseborn himself, fathered on a wildling woman by some long-dead crow.
ASOS - Sam II

Wildling accounts confirm what rangers said about the man.

She punched him again. "Craster's more your kind than ours. His father was a crow who stole a woman out of Whitetree village, but after he had her he flew back t' his Wall. She went t' Castle Black once t' show the crow his son, but the brothers blew their horns and run her off. Craster's blood is black, and he bears a heavy curse." She ran her fingers lightly across his stomach.
ASOS - Jon III

Aemon Steelsong was son of Mance Rayder and his Queen Dalla. Mance was a deserter from Night's Watch so their son would fall under the category of children sired by Black brothers after taking their oath.

"Digging for the treasures"

Many of them frequent brothels such as Mole Town so naturally there would be a number of Black Bastards running around in Mole's Town although none are mentioned specifically IIRC. It's only logical that If a certain number of Black brothers are wenching, there's bound to be some fruits of that copulation. There's a proper term for it on the Wall, they call it "digging for treasures".

Ghost loped ahead of them. The grounds seemed deserted this morning, with so many rangers off at the brothel in Mole's Town, digging for buried treasure and drinking themselves blind. Grenn had gone with them. Pyp and Halder and Toad had offered to buy him his first woman to celebrate his first ranging. They'd wanted Jon and Sam to come as well, but Sam was almost as frightened of whores as he was of the haunted forest, and Jon had wanted no part of it. "Do what you want," he told Toad, "I took a vow."
ACOK- Jon I

But it must be noted that Mole Town is frequented only by Castle Black men. It is unknown if their comrades stationed at Eastwatch or Shadow Tower have similar establishments nearby.

Punishment for breaking the vows of celibacy

You are correct they are breaking their vows. It is unknown what punishment did the Night's Watch of the old pass for such oath breakers but now, with the strength very much dwindled, it appears that Lord Commanders and Castle Commanders turn a blind eye to these minor breaches of their oath.

We have one example when Jon tried to desert his post to fight beside Robb but was brought back by his friends.

Jon stood tall. He told himself that he would die well; that much he could do, at the least. "I know the penalty for desertion, my lord. I'm not afraid to die."

"Nor live, I hope," Mormont said, cutting his ham with a dagger and feeding a bite to the bird. "You have not deserted—yet. Here you stand. If we beheaded every boy who rode to Mole's Town in the night, only ghosts would guard the Wall. Yet maybe you mean to flee again on the morrow, or a fortnight from now. Is that it? Is that your hope, boy?"
AGOT- Jon IX

Now of course, Desertion is still a breach which is not dealt with kindness or benign negligence by the Watch, contrary to how they treat breach of celibacy vows. So here, it looks like Lord Commander was going to treat it as if Jon had gone to dig for the treasures. But it is not explicitly mentioned, this is just how you can interpret it. Alternatively, it could be just that Lord Commander was going to pretend that Jon had gone for ride to get some air.

Jon was however a firmer Lord Commander when his turn came. Few Black brothers mistook the Tower housing Wildling women for a brothel and Jon locked them in ice cells.

"Hardin's Tower." Of the sixty-three who had come back with him from Mole's Town, nineteen had been women and girls. Jon had housed them in the same abandoned tower where he had once slept when he had been new to the Wall. Twelve were spearwives, more than capable of defending both themselves and the younger girls from the unwanted attentions of black brothers. It was some of the men they'd turned away who'd given Hardin's Tower its new, inflammatory name. Jon was not about to condone the mockery. "Three drunken fools mistook Hardin's for a brothel, that's all. They are in the ice cells now, contemplating their mistake."

Iron Emmett grimaced. "Men are men, vows are words, and words are wind. You should put guards around the women."

"And who will guard the guards?"
ADWD- Jon VII

But admittedly Jon was dealing with attempted rape by the looks of it, something which even previous Lord Commanders wouldn't have tolerated. Mole's Town Women were different, it was consensual business between adults.

"Yes, and what of Lucamore the Lusty, with his three wives and sixteen children? The song always makes me laugh."

"The truth is not so funny. He was never called Lucamore the Lusty whilst he lived. His name was Ser Lucamore Strong, and his whole life was a lie. When his deceit was discovered, his own Sworn Brothers gelded him, and the Old King sent him to the Wall. Those sixteen children were left weeping. He was no true knight, no more than Terrence Toyne . . ."
AFFC- The Soiled Knight

Another Ser Terrence Toyne was executed for breaking his vows with King's own mistress.

But that doesn't mean that Kingsguard is as perfect as Singers say. Many of them are no strangers to Street of Silk and some like Prince Lewyn had their own proper paramours. None were punished or tried.

So speculating, it appears that guilty members:

All of these things depend on the temperament of the Commander and needs of the order. 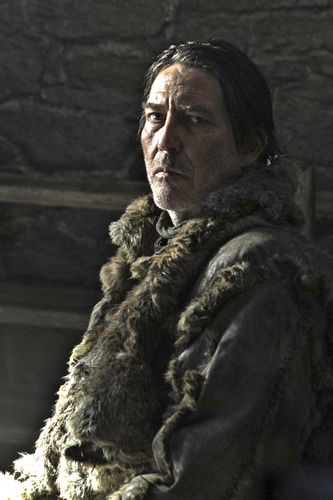 Selyse Baratheon says this of Mance:

"Gerrick is the true and rightful king of the wildlings," the queen said, "descended in an unbroken male line from their great king Raymun Redbeard, whereas the usurper Mance Rayder was born of some common woman and fathered by one of your black brothers."
-A Song of Ice and Fire: Book Five - A Dance With Dragons, Chapter Sixty-Nine (Jon XIII).

Unfortunately we don't know what happened to the father, it is just said that Mance's name comes from the fact that the Wildling village he was at was raided and he was taken by the Black Brothers at a very young age. Perhaps the deserted brother was at that town.

when he gave his seed to her he gave his soul as well.
-A Song of Ice and Fire: Book Three - A Storm Of Swords, Chapter Fifty-Six (Bran IV).

Satin
is a contender for this title as well, he is a boy who claims to be 18 years old and was born in a brothel in Mole's Town. This is important as he may actually some unknown bastard of a member of the Night's Watch (who may have been "digging for gold" as Aegon so adequately points out). Although unconfirmed, this is actually a strong case.