So I've read an adaptaion of this book in a different language, but the writer there didn't reveal the original book name. He just said, "It's a well-known sci-fi book." Here are some details: 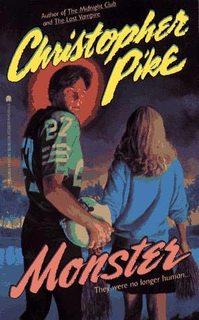 She said she killed them because they were monsters. Mary Blanc walked into the party with a loaded shotgun. In the blink of an eye she blew two people away. She wanted to kill more, but was stopped by her best friend, Angela Warner, and the police. The next day, when Angela visits Mary at the jail, she asks why she did it. Mary responds, "Because they were no longer human." Angela thinks she's crazy. At first.

This review has a lot more details:

The said planet was between Mars and Jupiter, and humans- probably the inhabitants of Atlantis desroyed that planet.

Spark says that he doubts the “fifth planet” was our current fifth planet, Jupiter, but rather a planet that used to be between Mars and Jupiter before blowing up and forming our solar system’s main asteroid belt.

The crash formed a lake and the water was polluted by microorganisms.

Angela and Kevin visit the library to do some research. Angela finds a reference in the newspaper archives to Point Lake being formed by a meteor. Kevin says yeah, that’s the prevailing theory. He says that the high school gets its water from the lake, but a lot of people in town (Kevin and Angela included) get their home water from a well.

Those who were affected were attracted to raw meat for it being rich with iron, since the organisms probably survived on iron.

The KAtuu change on the inside before they change on the outside, but the first sign of the change is their hunger for blood. Angela thinks about her recent cravings for raw meat.

In the end, she blows up her house with all the infected people in it, but she herself turns into a monster gradually (presumably an alien) and hides in the nearby forest, losing her human memories completely.

And Angela won’t put it out because she wants that motherfucker to burn. That’s right: Angela’s going to blow up the house. She can’t depend on Mike’s 40-gallon propane tank, so she’s going to rig a gasoline bomb in the basement. But she doesn’t want to die with the rest of the monsters, because she’s convinced that even if she turns into a monster, she won’t be, like, a monster monster. She’s decided to use gunpowder as a fuse, so she’ll have at least a two-minute delay before everything goes kablooey. There is no possible way that this whole plan could at all go wrong. Angela goes shopping to get raw meat, some shotgun shells (from which to extract the gunpowder), 100 feet of rope, glue, and a razor-sharp hunting knife. Sounds like the makings of one hell of a party!

While walking, Nguyen finds an enviscerated deer carcass — the tenth in the past six weeks. And he feels like something is watching him. So we pan up to… …a batlike creature with purple talons and leathery wings high in a nearby tree. The creature is tempted to eat the man below it, but then it touches an amulet hanging around its neck and remembers, “People were not for eating.” That’s one helluva existence you’ve carved out for yourself, Angie. I bet dying in that explosion doesn’t look so bad now, huh?

Not the answer you're looking for? Browse other questions tagged story-identification books horror alien-invasion or ask your own question.

16
Help Identifying a Sci-Fi Book: Humans transported to alien world and given tasks to escape
7
Movie Identification - 1990s VHS Sci-Fi/Horror
7
Searching For Horror Anthology Book Title
8
Identify story about girl on alien planet with western feel
10
Science fiction book series about aliens that look exactly like humans, protagonist tries to rescue her brother from a government camp ran by aliens
6
YA sci-fi book about a girl who is hired to go to a planet and steal some alien technology