Book about a boy and girl in proxy magical competition including a field of ice in a magical circus?

I remember reading a story a few years ago, maybe around 2015, a small new paperback book, maybe around 300 pages, about a young boy and a young girl with magical talent, who were supposed to show whose the better one. This was supposed to be a proxy competition for their masters who wanted to see whose teaching methods were better.

After a few years of training and without being told about the upcoming proxy competition they both came to a magical circus that magically appeared every few years or so on an open field and disappeared suddenly again. In this circus they were supposed to create their own circus attractions to show how much they have learned and which attractions were the better ones. There were different ones like something involving cards or mirrors, but the one I found the most fascinating was a field of ice. I think there were flowers made of ice, trees made of ice, ... and the description was beautiful. Sadly I am not good enough with words to describe in which ways I found the description fascinating, especially in a language that is not my mother tongue. If I remember correctly the little ice world was one of the creations of the boy.

I read the book in german and I think the word "Zirkus" (meaning circus) was part of the title, but I am not sure.

I would love to read the book again, especially the part about the ice-related attraction (and the food), but I can't find my copy and I can't remember the exact name. Does anyone know the name of this book?

The Night Circus by Erin Morgenstern. 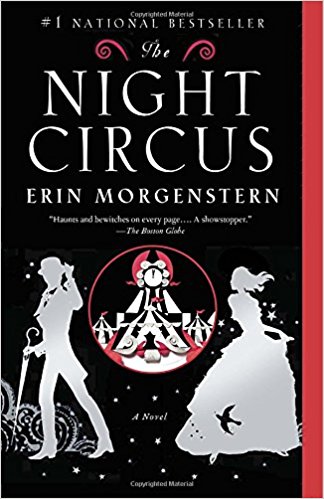 The circus arrives without warning. No announcements precede it. It is simply there, when yesterday it was not. Within the black-and-white striped canvas tents is an utterly unique experience full of breathtaking amazements. It is called Le Cirque des Rêves, and it is only open at night.

But behind the scenes, a fierce competition is underway: a duel between two young magicians, Celia and Marco, who have been trained since childhood expressly for this purpose by their mercurial instructors. Unbeknownst to them both, this is a game in which only one can be left standing. (...)

Not the answer you're looking for? Browse other questions tagged story-identification novel books magic or ask your own question.