It's worth reminding ourselves what "canon" means in the context of Star Wars:

@pablohidalgo Periodic reminder that all 'canon' means is: do other storytellers *need* to be beholden to it. That's it.

For the life of me, I cannot imagine Lucasfilm laying down an edict that requires future storytellers abide the exact words of Pablo Hidalgo's Twitter account. In other words, no matter how awesome she is, Millicent is not canon.

But it's still a useful resource

That being said, there's a reason Pablo Hidalgo is usually considered a "God" for the purposes of "Word-of-God". He holds a very privileged position with respect to the Star Wars canon, and has access to a vast quantity of material that the layfan will never see. So it's a little silly to disregard what he says out of hand.

Personally, I find it most useful - even if it's not technically correct - to consider (most of) Hidalgo's tweets as "canon until contradicted." The real value of his Twitter feed is that he can clarify the meanings of things that may not have been obvious; an advantage of his position. But at the same time, how do we know when something Pablo says is inviolate? Answer: we don't (usually; sometimes he's obviously joking1).

Hidalgo does try to make this easy for us: he almost never introduces wholly new ideas on Twitter, is frequently cagey when asked direct questions, isn't afraid to give generic responses like "that's not for me to say" or "not my call", and frequently reminds me people that major announcements aren't going to be made on Twitter of all places. Joking aside, I've never seen him deliberately mislead fans2; that's a large part of the reason why I, personally, feel comfortable citing him in answers here.

However, as non-insiders, we cannot rely on any of Hidalgo's statements not being contradicted by later works. Or by earlier works, for that matter. The ultimate source of "canon" is always going to be the published output.

1 Incidentally, this is why he really dislikes his tweets being cited on Wookieepedia

2 Whether or not somebody gets a joke is a different question, though Hidalgo usually tries to point out when someone has misinterpreted; if you have difficulty parsing his humour, it's worth reminding yourself of this fact when deciding whether or not something he said "counts" as canon.

I don't have a screenshot unfortunately, but as of December 2015, TFA release time, his Twitter account's blurb explicitly contained the text "Don't cite tweets as canon" (which I dutifully cited here in this answer). Here's more web evidence. 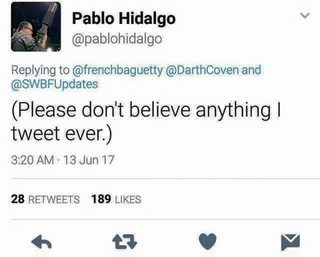 And just for an example:

105
How is canonicity of derivative works determined for Star Wars?
23
How old are Kylo Ren and Rey?

66
Is the Star Trek (2009) movie considered canon?
14
Is the “Looming” of Time Lords Canon?
11
Did Disney officially call Legends/EU material “Not canon”?
6
Is Twilight Company in “Rogue One”?
16
How canon are the 1993-1995 Witcher comic books?
0
What was the story reason behind making Carnelion IV so far behind?
3
Where was Thane Kyrell during the events of Rogue One?
20
Where / How did Han Solo learn to speak / understand Shyriiwook?