What are "heroes in a half shell"?

They say this line every time in the Teenage Mutant Ninja Turtles 1987 cartoon opening:

This is a reference to (or pun on) the idiom "on the half shell", which is a way of serving shellfish (but not turtles). For example:

on the half shell
of raw shellfish, served in the bottom shell, chilled and with condiments

It seems likely to me that the writer of the theme song identified this idiom with the old-fashioned practice of serving turtle soup in the turtle's shell. For example:

Accounts in the 18th and 19th centuries of massive parties known as “turtle frolics” suggest they were more popular than hog barbecues and oyster roasts, with descriptions of servants bearing three-foot-long upturned turtle shells filled with hot turtle stew for large crowds.

—Jack Hitt, What Ever Happened to Turtle Soup?, Saveur, 2015

Since Shredder often vowed to turn the Ninja Turtles into turtle soup, it seems likely to me that the two culinary references are related. While the idiom "on the half shell" is not applied to turtle cuisine in real life, turtle soup served in the upper part of the turtle's shell would indeed be "in a half shell" in literal terms. So, to me, the line is effectively winking at Shredder's failed threat that he would dine on soup made of his enemies.

Their shell doesn't go all the way around their body though, at least not in this show. Look: 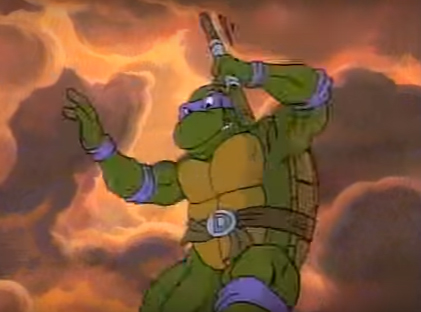 This is from this same theme song. They have some yellow shell-type surface in the front, but it isn't connected to what is clearly a half-shell on their back. 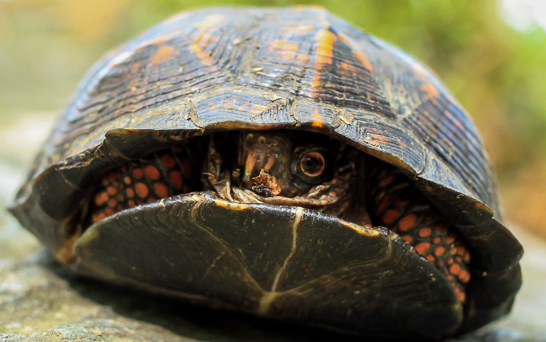 Since the TMNT are more humanoid, they can't do this. So they have a shell that essentially protects half their body. A "half shell", if you will

Biology aside, I'm pretty sure the lyrics are just a nod to the existing hipness of the surfer/skateboard culture at the time (late 80's) where the use of surfer slang is spreading by the kids/turtles.

These catch-words are surfer slang.

The phrase "heroes in a half-shell" is their way of incorporating this culture (or being a part of it) in replacing "half-pipe" with "half-shell".

TL;DR version: It's cool and hip jive from the late 80's.

I think that the reference "heroes in a half shell” refers to their mutation, being half humanoid and half turtle.

41
Can the turtles go inside their shells?