Where did "kneeling with a sword thrust into the ground" pose come from?

Everybody knows the pose where a person kneels with the point of their sword thrust into the ground before them. I've encountered it in many fantasy books, mostly epic fantasy like Game of Thrones and Words of Radiance. 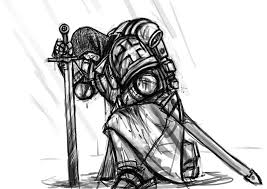 Is there some historical basis for this pose/gesture? Did it originate in some fantasy novel long time ago? Thanks.

This specific pose is a fairly recent trope. While knights have been depicted as genuflecting since at least the 13th century: 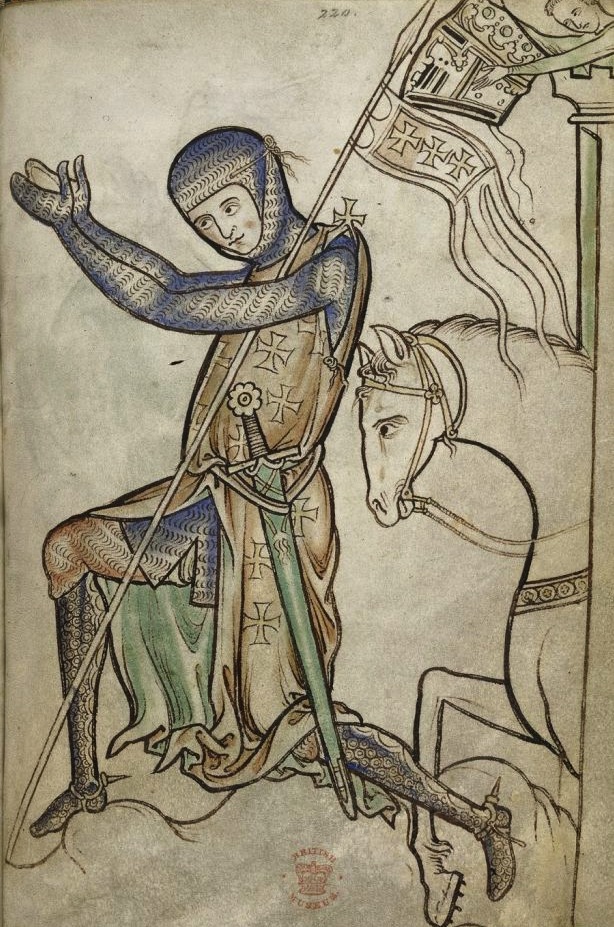 I know of no medieval illustration where the kneeling figure also has a sword drawn. I would be surprised to see an example of that exact pose pre-dating Tennyson's Idylls of the King.

The earliest image of that type that I'm aware of is John Pettie's The Vigil, dating from 1884: 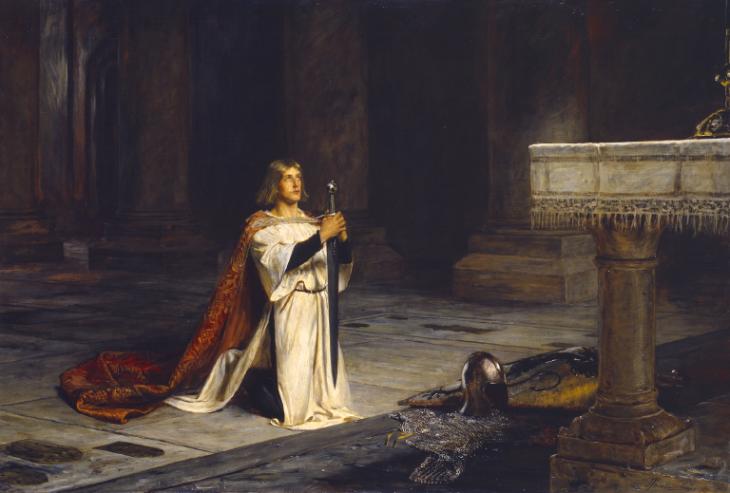 Even this example isn't exactly what you're referring to, since the sword isn't touching the ground.

The earliest example of the specific trope of the reverent knight genuflecting before God, with his sword planted in the ground before him, of which I'm aware would come from Monty Python and the Holy Grail. I'm not sure if this is the definitive source from which all modern examples derive, but it's the earliest example I can find that is famous enough to be a contender.

Edited to add: Here's a GIF of Arthur assuming the posture in Monty Python and the Holy Grail.

And here's Lancelot doing the same thing in the "You got my note!" scene: 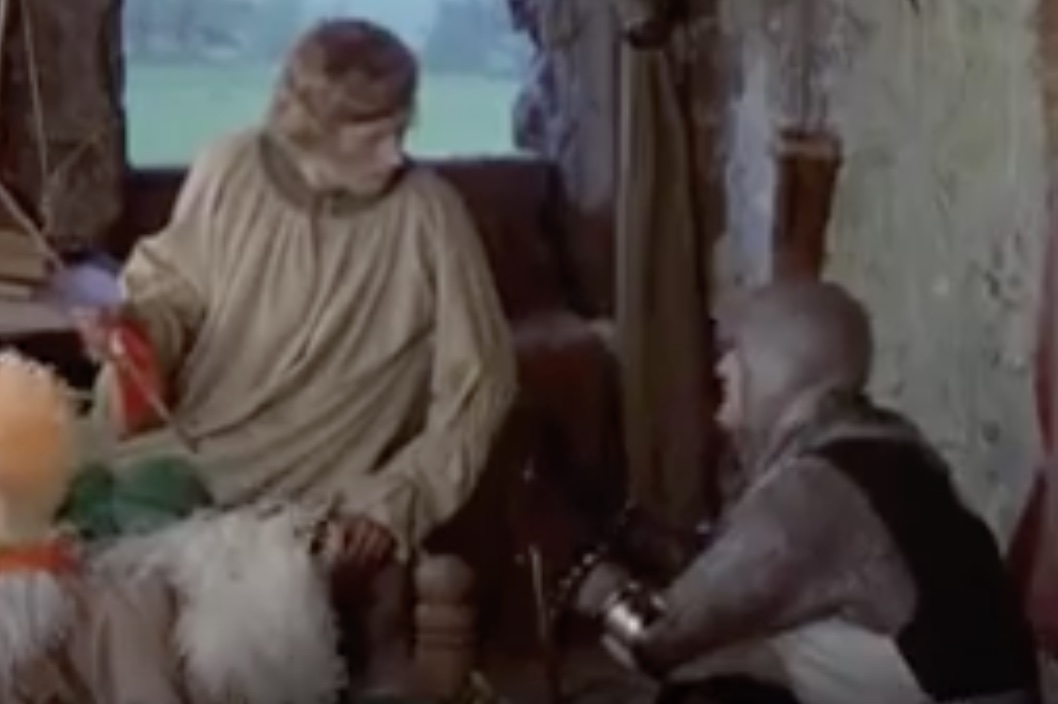 The kneeling position is one of servitude in general. In particular, this posture is often historically part of swearing fealty (to a king or leader). Most often, you would do this unarmed (note the guy swearing here has someone else holding his sword) 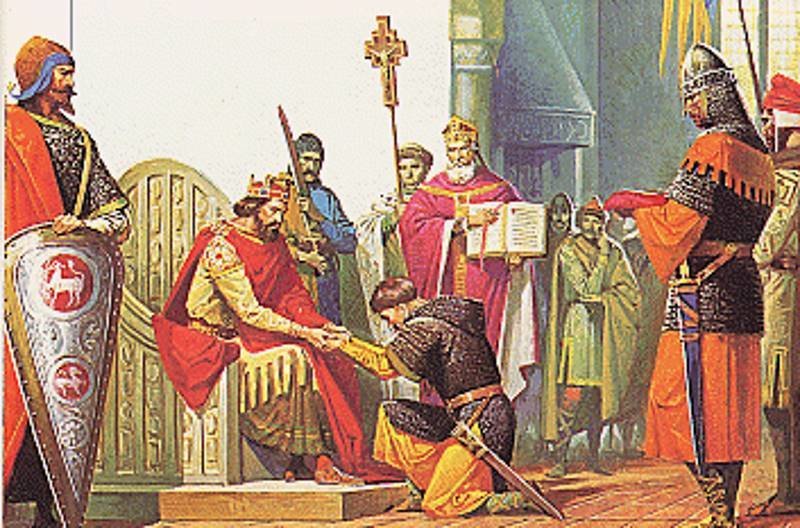 And it survives even into more modern stories 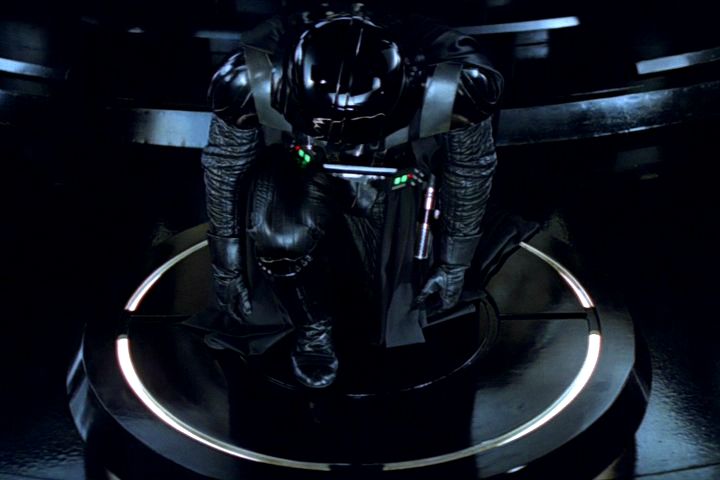 I can't find anything definitive about the sword planting part. As noted in a comment, the figure above is a Templar, so he could be praying, but there's non-Templars in stories who do this as well.

The problem is that the sword-plant is almost certainly not historical. TV Tropes put it well why shoving your sword in the ground is a bad idea

In the tiresome world of Real Life, this is not advised — mistreat a sword this way and you are likely to chip, dull, bend, or even break the blade.

Since swords aren't cheap things, this is likely to heighten the dramatic effect. Sometimes the user is resting against it, eager to use it. Other times it looks like they're resting against it to look cool. Or maybe you just need a smaller sword. Regardless, having a weapon of war next to a position of peace or submission is a powerful bit of juxtaposition