In a UK comic back in the sixties, there was some villain who looked like Gru (from Despicable Me), but he did a big grin sometimes, and then bats flew out his mouth. 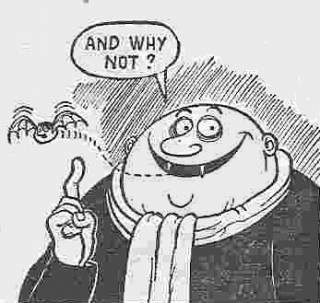 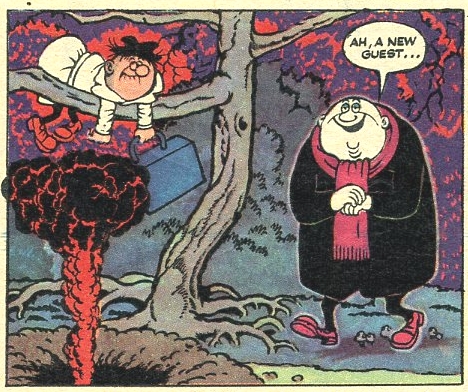 Grimly Feendish was a supervillain who sought to conquer the world, using both his monsters and bizarre plot devices, such as exploding treacle, to do so. He was usually thwarted by Eagle-Eye, Junior Spy. At one point Grimly started Doomsday School for young monsters across the road from Eagle-Eye's school, Conker Crescent High. One of the students at Doomsday School was Grimly's nephew, Fred Feendish, who became friends with Eagle-Eye and would sometimes try to warn him of his uncle's schemes.

Not the answer you're looking for? Browse other questions tagged comics character-identification despicable-me or ask your own question.

10
Who is (was?) this DC Comics villain?
7
Comic character from the 90s who resembled Spawn
5
Marvel Comics villain from the 60s/70s who was essentially a walking chemistry set?
5
Comic with disturbing imagery
9
Looking for a Spider-Man comic from the 1970s where a telepathic man-child controls a town, is defeated when Spidey "deafens" him?
5
Why do the Minions remain loyal to Gru after he is no longer a villain?