Were holograms used for Star Trek communications prior to Star Trek Discovery's pilot?

In the pilot episode of Star Trek: Discovery they used Star Wars-style holograms for communication with Starfleet. I don't recall seeing that in the series set before or after, but perhaps I'm wrong?

I know that holograms have been widely used in TNG and even more in Voyager but I just don't remember them being used for communications like this.

In the in-universe chronology, no; Discovery is the earliest known example of hologrammatic communications in the Star Trek universe.

In the production history, holograms were used for communication a couple of times on Deep Space Nine; if I recall correctly, the first pair we see were installed on the Defiant and the USS Malinche in season 5's "For the Uniform": 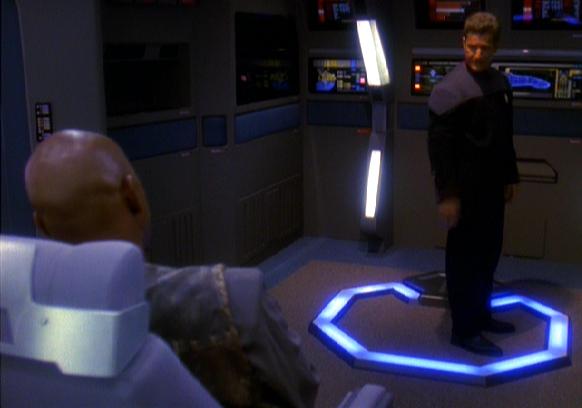 Sisko: Is the new holo-communicator ready?

Kira: The Chief's had it online for six hours now. I think he's eager to have someone give it a try.

Sisko: Always like to please the Chief. Open a channel to Captain Sanders on the Malinche.

It got used a handful of times in future episodes, but it never really caught on and was quietly dropped.

Federation/Starfleet technology in the time of TOS was limited to view screens. It was only in TNG/DS9 era that we see Starfleet using holographic communication. This puts the appearance in Discovery (pre TOS) out of strict canon.

The problem that any new Trek series will have is that present technology has progressed to they point that it makes it difficult to make something look futuristic when it's less capable of what we have now.

For instance, the smooth touchscreen displays of The Next Generation Era looked really cool and futuristic...in 1987. Now you probably carry one in your pocket. So going backward to what Star Trek had for controls and displays in the late 1960s would look really pathetic. And Burnham's EVA suit with the heads-up display; firefighters and divers today have breathing apparatus where the masks display critical information, so suddenly having something in the future that doesn't have it (like the old suits seen in TOS) would raise bigger issues.

So really, it's something that old Trek fans, and I'm one of them, are going to have to deal with: the technology of Star Trek is going to be retconned, so stop worrying about it.

48
How did Tasha Yar know that she needed to make a hologram?

24
What were the *other* two original Star Trek pilot stories submitted to NBC?
9
Why didn't Voyager update their uniforms after Pathfinder?
11
When did 'Star Fleet' become 'Starfleet'?
11
Why did they make another prequel?
7
What are all the forms of instantaneous galactic travel in the Star Trek Universe?
7
Why did some vessels in the 23rd Century use unique assignment patches?
41
What was the first 3D CGI used in Star Trek?
7
Why has no new Star Trek show been set after Voyager?
9
In Star Trek, prior to Discovery, has a ship been shown dropping out of warp from the outside?
1
How can Tilly recognize this ship?