I've got this story in my mind for years, maybe some details are wrong but I'm sure about the general storyline, also this could be from a French novel so I'm not aware is this made it outside France

This is all I'm sure about this story, again this could be from a French novel so I'm not sure it'll recall something to someone.

The cover features a cat and an evil-looking floor: 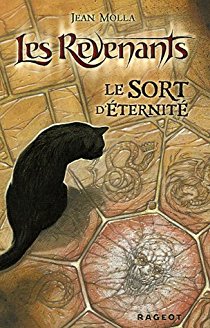 Quentin's life changes when he moves into a fifteenth-century home and discovers a strange stone in the cellar floor. This stone exerts a harmful fascination on his older brother Nicolas. Soon their neighbor Violaine, an old woman, warns Quentin against the forces of evil and enjoins him to remember his past. Little by little, he realizes that the house belonged to a master sorcerer, Jacques Guernière, burned alive in 1457, and that he is his reincarnation. Faced with Nicolas won by the powers of evil and preparing the arrival of the Lord of the Flies, Quentin begins his fight against the allies of the Devil and discovers his powers as a sorcerer...

Our hero just moved to a small city/village with his mother, I'm sure, a cat, maybe a sibling?

Main character Quentin moves to Comberoumale (hint: typical French isolated town's name) with his mother and brother Nathan. Not sure if the cat on the cover was theirs, but later on in the series a character can shapeshift into a cat.

The young boy finds magic circles, a summoning demon thing, in the cave of their new house

Technically, it was a paving stone in the basement.

His neighbour is/was a witch and teaches him about magic, with a wand I think

Violaine, an old woman, is the one who introduces him to the (not-so) legend of the evil demon Azael sleeping in their basement. She has the "guide" role, providing info on magic, legends and stuff.

There is no "wand" but a "bâton de sorcier", which roughly translates to "sorcerer's staff", passed down by Violaine to Quentin.

Later, the cat kills a rat in the cave, on the summoning circle and the blood wakes up a demon

Azael, the demon trapped in the stone, emitted some kind of smell which attracted the local cats. The prologue features a cat killing a mouse, and instead of eating it on the spot, taking it to the house's basement and eating it there. The blood is sucked by the stone. Here's the extract, courtesy of Google Books:

My English translation below.

The darkness is total, the cat trots towards the center of the room and drops its victim on the cold slab, which is as rough as a pumice stone.

Why does he come here every night to devour the rodents he catches? He does not know. He comes. As came countless cats before him, for ages, without anyone having taught them to. The occupants of the old house - when they were still alive - never knew.

The spicy, metallic smell that floats in room gets to his head and kindles his appetite. His canines shred the corpse. The bones crack under his jaws, the juices spurt out. A few drops of blood fall on the slab that he does not bother to lap. Would he even have time? Hardly have they touched its surface that they disappear, as if sucked by the stone.

Also, Nathan (the main character's brother) did several sacrifices on the stone, allowing the demon to be awoken/regenerated.

The story took place nowadays, I read it around 2009 but the book could be a little bit older

13
YA series about magical cats which have some kind of ability that involved seeing strings
12
Medieval fantasy book where an evil sorcerer tried to use magic to make the new weapon, a cannon, explode
21
Fantasy novel/series with young man who discovers he can use magic that is outlawed
23
Book which has different races and could use magic
7
Book about a girl with magic, who can teleport and is mated to a powerful vampire