Werewolf trilogy from the 90's

I'm looking for the name of a trilogy of werewolf novels from the 90's that were originally part of the Scholastic Book Club's "Thrills and Chills" package. All I recall from the first of the three novels was a boy that discovers he can transform at night, and that other boys in his school can also transform. To avoid the other boys in their werewolf forms at night, he frequently runs and hides in a pond/bog (I think) so that the other wolves can't track him. Eventually, they get wise, and puppy-guard/surround ;) the pond at night. For some reason, the third book was never available, and I always wanted to conclude that series, even if it's at a kid's reading level.

By pure luck, I finally saw a tiny thumbnail on the Google search for "scholastic werewolf", after trying to figure out the title for years. It's the Werewolf Chronicles by Rodman Philbrick. All my other searches yielded the "Shiver" series, Twilight (ugh), or WhiteWolf pen-and-paper RPG guides. 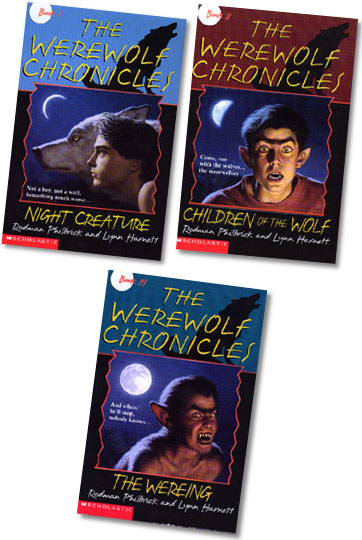