I am searching for a book series ... people were transfer from Earth by way of being reduced to a mathematical pattern and recreated on the other end. Some people appear as "wizards" on the receiving planet, turns out they just had a connection to the computer and the computer was materializing the object by using the "object" formula and using energy to mater transfer from an energy universe. I think there were multiple books in the series and I seem to remember that the main character may have undergone a magical sex change at some point.

This is by Jack L. Chalker, the Soul Rider series, also known as the Flux and Anchor series. Most of the action took place in "wild" areas, where stabilization fields didn't hold sway and anyone sufficiently in touch with the computers that maintained reality could do what appeared, to the powerless, as magic. 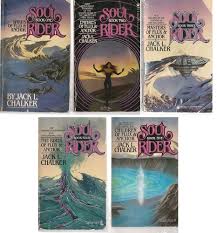 From the blurb of the first volume:

Cassie did not feel the soul rider enter her body...but suddenly she knew that Anchor was corrupt, and that, far from being a formless void from which could issue only mutant changelings and evil wizards, Flux was the source of Anchor's very existence.

The price of her new knowledge is exile, yet Cassie and the Rider of her soul are the only hope for the redemption of both Flux and Anchor.

To expand upon @Zeiss Ikon's answer and address the items mentioned in the question, the conversion and transportation issues you mention are addressed in Book 4:The Birth of Flux and Anchor in which some scientists are toying with an energy they discovered by creating a singularity point that they use to punch through to another universe. They eventually discover that they can surround things with this energy and then convert the objects to energy, transport it somewhere by shooting the energy pattern through the hole they open, then convert it back. The calculations were too complex for a human to handle so a computer possessing an artificial intelligence did all the legwork in this process.

Also, I don't remember which book(s) it happened in but one of the characters named Suzl has many different alterations done to her over the course of the series which result in her looking almost nothing like her original self, including a sex change.

This might be the Well World series by Jack L. Chalker and you might be thinking of Dathan Hain who becomes an Akkafian female in Midnight at the Well of Souls.

The Well of Souls is controlled by a computer built by the Markovians, that is able to locally alter reality since "reality" is actually a simulation designed by the Markovians themselves. This gives wizardly powers to those who can control the computer (Nathan Brazil and, if memory serves, Mavra Chang), and allows "miracles" to happen. The computer also transmogrifies whoever enters the Well of Souls to fit the local environment and population.

The traveling part does not match, though. You can read some of the books at Baen.

Datham Hain had entered the gate with a false sense of bravado, but he was scared to death. He had nightmares of awful proportions, bringing forth every fear in his long life. These surfaced as the Markovian brain picked, analyzed, and classified each subject according to some long-lost, preset reasoning.

"Hain," replied the official patiently, "life is hard and cheap in the Akkafian Empire. Infant mortality is extremely high, not only from normal factors imposed by nature but for other reasons you'll find out sooner or later for yourself. As a result, to ensure racial continuation, about fifty females are born for every male.

"A Markling is a female Akkafian, Hain. You've had a sex change."

It may be that Chalker recycled some concepts and @ZeissIkon has the right of it (I haven't read the Soul Rider series).

6
Scifi book with FTL travel that caused the ship to split into multiple copies
9
Short story. Alien avatars try to prevent backward civilisation from destroying precious (mathematical) artifacts
36
A witch, a vampire and a pixie meet in a bar and talk about tomatoes eradicating humanity
8
Stand-alone novel with clones, re-populating Earth, lunar base and apocalypse, probably hard SF
2
Kindle superhero series including an army guy in powered armor, a self-aware robot, and a teleporting thief
2
Light novel series where a kid is sent to another world and sacrificed himself in a dungeon