When and why did orcs go green?

Tolkien popularized the orc as the generic fantasy bad guy. In his legendarium, orcs were corrupted elves and their limited descriptive text reflects this. They are described as "swart" and "sallow", suggesting their skins were dirty yellow to dark brown.

The popular modern conception of an orc, however, has green skin. This has been popularised by World of Warcraft but it certainly predates that game. Orcs have been Green in Warhammer since at least 2nd edition when I first played it.

I presume the green-ness of orcs started with Warhammer, but I can find no evidence for it. Does anyone know of any firmer proof of where the original green orcs came from, and why the change from Tolkien's conception was made?

Okay, I really didn't intend to end up answering my own question, but this really piqued my curiosity so I dug into it.

The answer - weirdly - may actually be Spider-Man.

There does not seem to be any association between goblins and the colour green before the early 1900's. Searching shows that the early examples are fairy stories, which peaked in the 1920's. Then the association goes quiet until the mid 60's, when Spider-Man first encountered the Green Goblin.

Spider-Man and his green antagonist were created by Stan Lee and Steve Ditko, who were both born in the 1920's. Given this is when "green goblin" fairy tales were at a peak, and, apparently, via a school study aid at that, this is where they may have first formed the association. That said, as user @DaveSherohman points out, the authors were also fond of alliterative names — see Peter Parker, Jonah Jameson and so on — so it may just be a co-incidence.

Tolkien originally labelled his antagonists as goblins, and continued to use a loose association with the word when he switched to "orcs". The popularity of his work took off in the mid-60's — exactly the time when Spider-Man was re-enforcing the association between goblins and green.

Comic art has obviously always been an important influence on gaming culture generally. And when gaming exploded onto the scene in the mid-70's, there seem to have been two independent sources of green orcs and goblins.

The first source of green orcs seems to have been Tolkien artist Tim Kirk. He contribured this picture, The Road to Minas Tirith, to a 1975 Tolkien calendar: 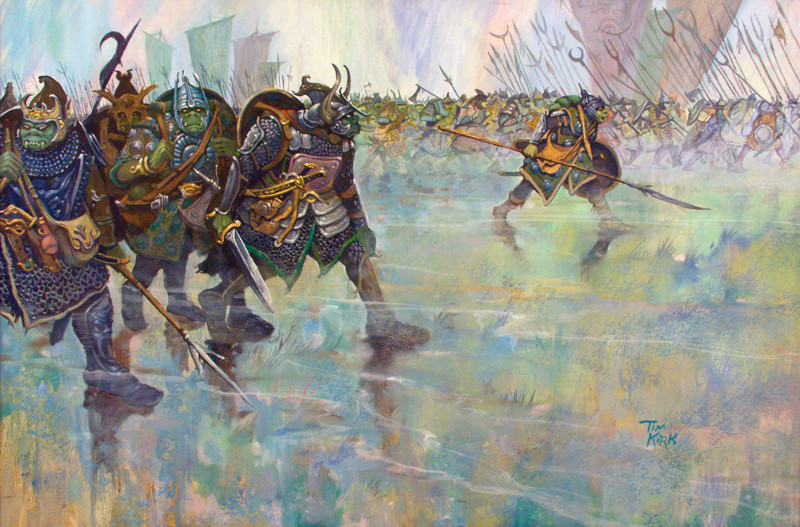 And has been consistent in his portrayal of orcs as green: 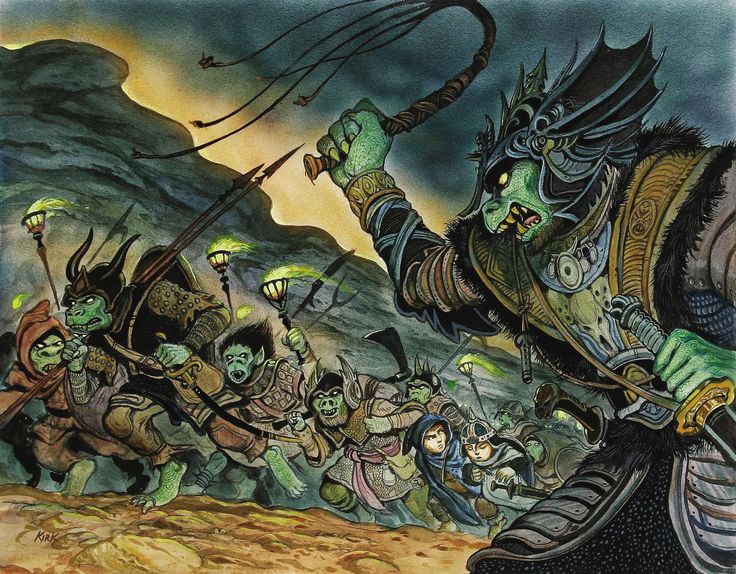 The second is D&D. Orcs and Goblins were in the original 1974 rules but were not given a physical description. In the 1977 Monster Manual, however, they were described thus:

Description: Orcs appear particularly disgusting because their coloration — brown or brownish green with a bluish sheen — highlights their pinkish snouts and ears. Their bristly hair is dark brown or black,

Green was popularised by a colour partly via this 1980 Grenadier miniatures set: 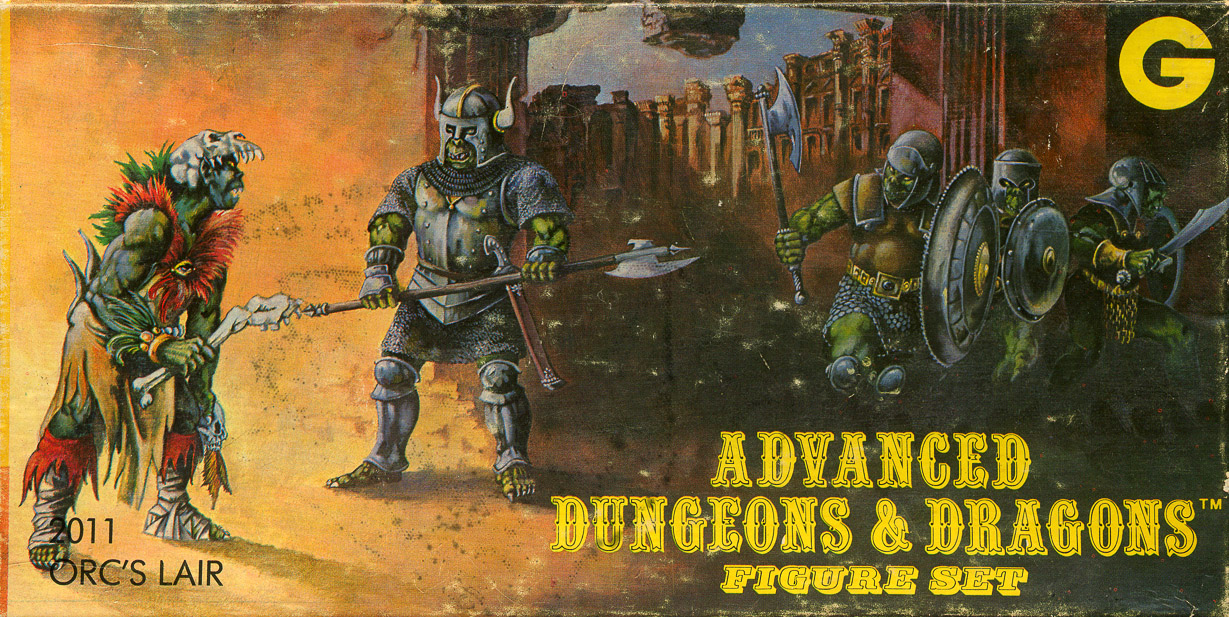 So by the time Games Workshop came on the scene with Warhammer in 1983, the greenness of orcs seems already to have been well-established in gaming.

Wikipedia states that some Orc traits, notably their green(ish) skin color were later additions to the Orc archetype that was established by Tolkien.

Edit: to prevent misinterpretation, I did not mean to imply that the green skin color was added at a later stage by Tolkien. But rather than it was added by another party, after Tolkien had established the initial archetype.

Tolkien's Orcs have been a major influence on fantasy fiction and games; they are the literary precursors of the Orcs (and similar races) of many different settings. The Orcs of Warhammer Fantasy, Dungeons & Dragons and other games most often differ from Tolkien's Orcs in that they are taller than Humans and usually have green or greyish-green skin rather than dark or yellowish skin. A notable exception are the Orcs in the most popular German role playing game The Dark Eye, which like Tolkien's orcs are small and dark, but also furry. The world of Hârn has an Orc-inspired race known as Gargun, whose name recalls the term gorgûn ("orcs") from the language of Tolkien's Druedain.

I've seen some people claim that "sallow" is actually "yellow-green", but the Oxford Living Dictionaries contradicts this notion.

Sallow
(of a person's face or complexion) of an unhealthy yellow or pale brown colour.

Likely, people assume that sallow could also mean green because they are already aware of green orcs and they're trying to make the word fit with their idea of what constitutes an orc.

Though I cannot find an authoritative source to confirm it, I see the same answer used when the question of green skin color arises.

Its actually Warhammer and Warhammer 40k's fault, which started way back in 1983. The apocryphal story is that someone at Games Workshop accidentally painted their ork models green, the dev team decided they liked it and it rolled from there. Certainly the popularity of World of Warcraft helped bring the idea of green orcs to the forefront.

In actuality, orcs come in a variety of colors depending on their universe of origin as seen here. Some are green, some brown, some black, and even orange and blue Orcs are present.

Whether this is the truth, or an often repeated myth, I cannot say.

I think it's likely that avoiding the perpetuation of racist stereotyping played a part in this. There's been plenty of debate as early as the first publication of the Lord of the Rings — see a citation on that on Tolkien Gateway, along with a reasonably nuanced discussion on the topic.

But the important thing is that it doesn't matter if Tolkien meant something bad; descriptions like "flat-nosed, sallow-skinned, with wide mouths and slant eyes" for quite good reason aren't acceptable today.

There's no need to debate any possible nuance in Tolkien's intent in making his heroic figures white-skinned and the evil race black (or "swart"). We can say "it was a different time", if you like. But, if you're going to do that today, you better be willing to seriously explore the consequences with eyes wide open. Turning instead to "green and pig-like" to signal otherness lets orcs just be monsters.

As to why, it may be the same reason that the Hulk is green. The first issues he was grey but that did not work well with the printing so they quickly changed him to green.

I would have guessed that 8-bit video games would have contributed. Color palettes were often restricted to 16 or 64 colors (cf color tables).

I think the explanation is more disturbing. There is more than a bit of suspicion that Tolkien was quite a racist. "Good" characters are "caucasian" in his books, and "bad" characters are "dark skinned". He even pictured orcs as a "mongolian-type" race. Bad humans come "from the east", "black numenoreans" (yes, not "black" as a race, but still) come from the south, etc. Turning orcs green when shown in pictures or movies serves the purpose of using a color not identifiable with any real-world human-race (such as mongolian), lest the artist be called (quite accurately) racist. The same thing happened to Mr. Popo in Dragon Ball, when in some countries they painted him purple, because for some reason he could not be black. Orcs are green because no real-world human race is green, so no one can get offended by feeling they are being depicted as orcs. It's a fix to Tolkien's narrow views in race matters.

Not the answer you're looking for? Browse other questions tagged history-of fantasy-genre orcs or ask your own question.

8
When and why did orcs get their pointy ears and tusks?

11
Why is breeding men and orcs considered evil?
21
What are the differences between Orcs and Uruks?
6
Are orcs considered evil to Eru and the Valar?
20
Who invented orcs?
7
When did orcs being as big or bigger than humans become standard?
7
When, Where and Why did the fashion to depict Fantasy Dark Lords Wearing Spiked Crowns Start?
8
When and why did orcs get their pointy ears and tusks?