Manga about “war between nations, and special individuals with elemental tattoos”

Many years ago, I read a comic/graphic novel/manga, and the main theme was about war in a fantasy world (think of Final Fantasy, maybe). I believe the war was between multiple parties (i.e. more than 2), but I only remember that one of the parties was an established colony with blonde hair and armor, and another party/tribe had darker skin and rode big birds(?).

In addition, there was a special feature that one person from each tribe had... they all had some tattoo representing some element. I cannot remember if it meant they had control over the elements, or if it had some other greater meaning.

You may be looking for the manga adaptation of Suikoden 3. Its run went from 2002-2006 and follows the events of the game.

It does begin with a dark skinned character and I do believe he rides a griffon (its been a long time since I've read it). He has tattoo on one of his hands which represents the fire element.

I've only read part of it but I remember it being very focus on war and army stratgy.

Here's the cover of the first book: 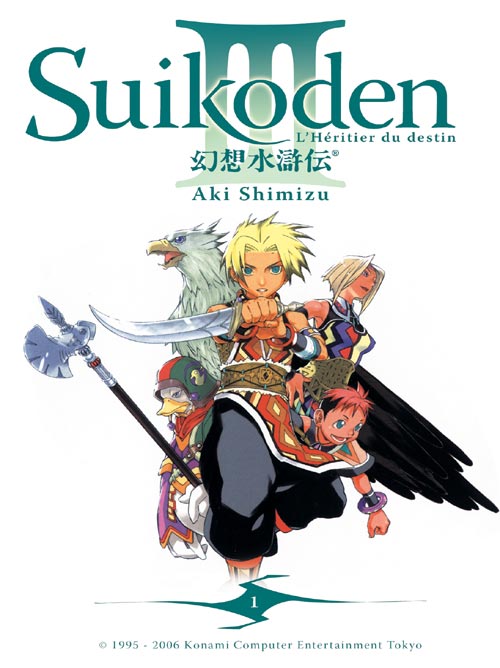 8
Old book with Sci-Fi/Fantasy mix with four Irish relics (stone, cauldron, spear and sword)
12
Comic/Manga from early 2000's: thief-like guy with a snarky fairy companion, accompanied by a female mage and a tank
7
Fantasy book series about persecuted people with elemental magic powers
4
Manga with main character abandoned by goddess and class
1
Manga about a boy who comes back as a ghost to make up with his girlfriend
3
Manga about a dude being summoned with his entire class and given the power of death