About reincarnation "forever and a day" blue cover

Ok so I'm looking for a romance novel I read probably 15 years ago - all I remember was reincarnation was a theme - I think the male lead was having dreams or had lost memories about the female lead - I think the cover was blue and was in cursive and hard to read - forever and a day was what I remember thinking of it as - but that title must be incorrect because I can't find it anywhere - I don't believe it's part of a series - probably written in the 80's or 90's.

EDIT: set in modern (at the time it was written) times, in English

Is it possible that you're thinking of Connie Rinehold's Forever and a Day (Goodreads)? 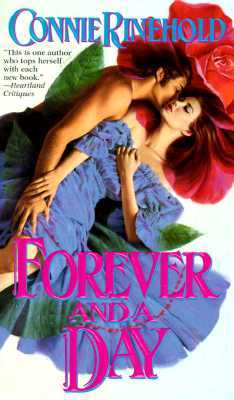 Scattering quotes and scenes from Alfred Noyes's poem "The Highwayman" throughout lends Rinehold's story a touch of magic that she undermines with a plethora of period trivia. Betina Wells, the daughter of a Wyoming landowner, is the reincarnation of the "landlord's black-eyed daughter," whose love for the highwayman resulted in her death. In this "sequel" to the poem, Dante, the highwayman, remains suspended in time until Bess lives again. When Betina arrives in England in 1878 to claim her inheritance, strange occurrences and Dante's overwhelming presence convince her that they are the original ill-fated lovers. While Dante ponders the mysteries of telegraphs, suffragettes and bustles, the arrival of a villain leads to a jarring repudiation of the reincarnation theme. Despite the problems, aficionados of time travel and paranormal romance may find the resolution satisfying. Ultimately, though, this is an interesting premise gone awry.

It's old enough (1996) and her dress is blue. Lastly, the color and font choices does make the title a bit weird to read, although it's not cursive.

Is it about two young girls who find a Ouija board and end up contacting a soldier from long ago? This soldier is actually the ghost of one of the girls soulmates. Then the story goes into her perspective as an adult and she learns that their love has been cursed and in every life they end up torn apart. If so, I totally remember this story and have also been looking everywhere for it with absolutely no luck. I swear that it is called Forever and Today. I bought it at a random little book store probably about 20 something years ago, because of the name. My bf and I used to say that we loved each other "forever and today". It's a little crazy but so far you are the only other person that I know of who is familiar with this book.

Not the answer you're looking for? Browse other questions tagged story-identification novel reincarnation or ask your own question.

14
Man who went through blue, yellow and red phases of super powers
5
Looking for a YA book about teenagers in space
15
Novel about reincarnated lovers across history
3
Book series, Reincarnation, Different Gods and Goddess?
7
Book of sci-fi short stories: purple and black cover with sorceress and cat
10
Short about reincarnation and a secret handshake