What's on the plaque of the Valyrian Steel Catspaw dagger?

The Valyrian Steel Catspaw blade comes with the following plaque:

As far as I can tell the animals just seem to be random ones that represent the different Houses.

There are some smaller ones I can’t make out. What are they? Do they represent any House?

The scene also appears to be quite random. Is there any significance to it? Is it linked to the blade in any way?

The top image depicts aftermath of Robert's Rebellion. The stag stands victorious and all the animals are bowing to him.:

From left to right(With exception of Stag of Baratheon in the center):

The bottom sequence shows Robert's Rebellion where a Stag, a Lion and a Wolf are fighting a three headed-Dragon. That signifies the fight of Lannisters, Starks and Baratheons against the Targaryens. 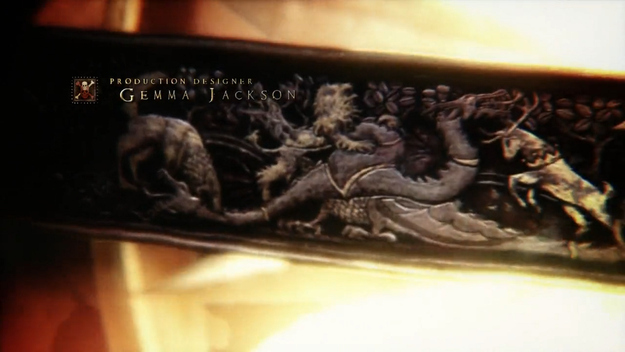 It seems to be random and unrelated to the blade. I suppose that's an attempt by the vendor to mimic the opening sequence of Game of Thrones TV Show.

34
What is the reason/significance of a lion as Lannister house sigil?
6
How do genetics work in Game of Thrones?
11
Why does the Valyrian Steel Oathkeeper use Dunk's Coat of Arms?
4
What was written in the book Sam was reading with the Valyrian steel dagger?
9
Why did the show use a fancy looking Valyrian steel dagger?
10
Do we ever find out who sent the catspaw after Bran in the show?
2
Are there any other unofficial House words?
5
Why did Prince Doran not join Renly Baratheon?
10
Was Jon Arryn capable as the Hand? What were his achievements?