What was written in the book Sam was reading with the Valyrian steel dagger?

In Game of Thrones Season 07 Episode 01, "Dragonstone", Sam finds out that there is a mountain of Dragonglass underneath Dragonstone. Whilst searching through the book one of the pages has a picture of the Valyrian steel dagger that the Catspaw used to try and kill Bran with.

What is written on that page? Does any of it have any relevance to that particular dagger?

I have found an image that shows the page quite clearly: 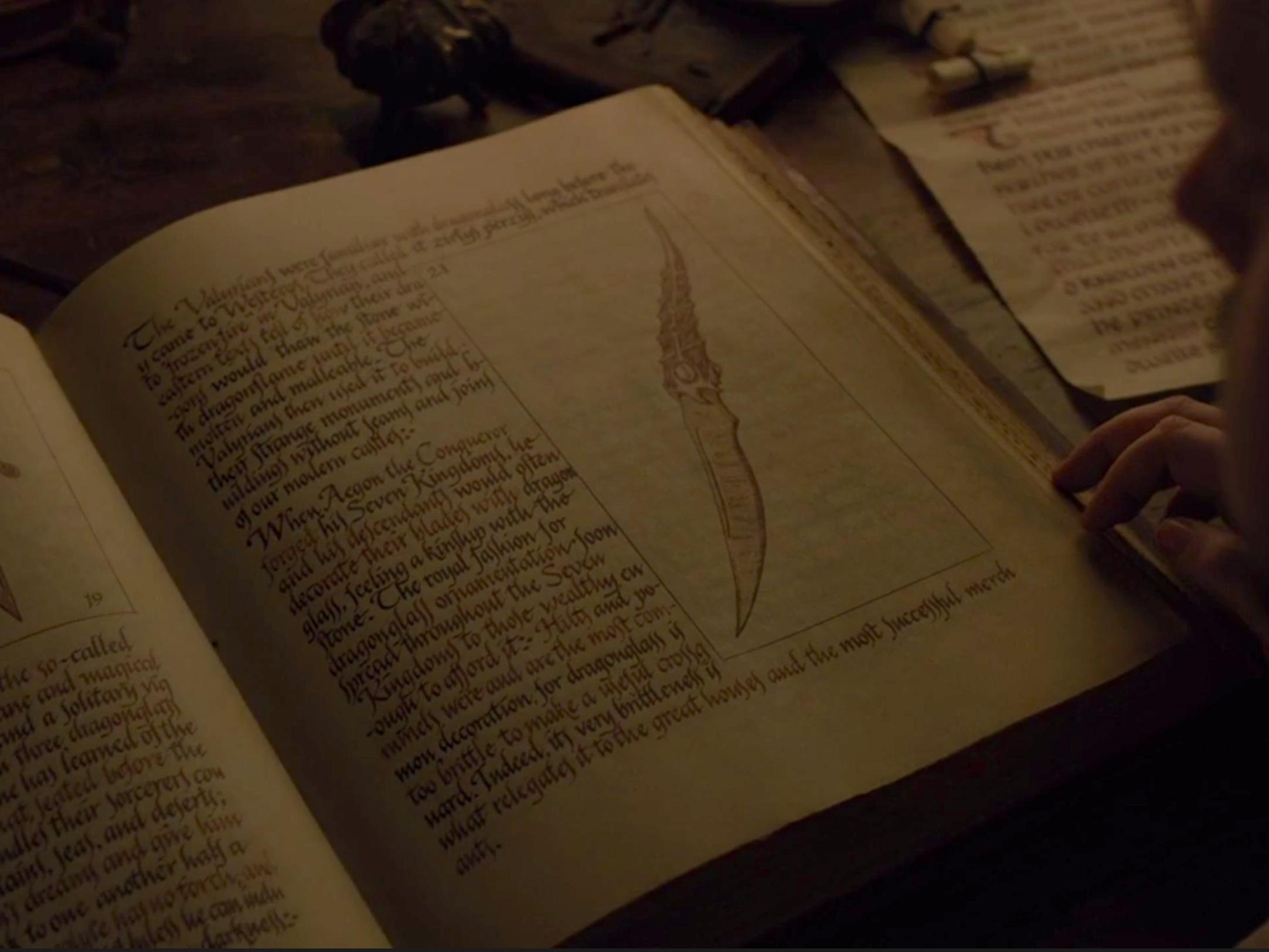 The text appears to say, I have taken this off of the wikia but it does appear to be accurate:

The Valyrians were familiar with dragonglass long before they came to Westeros. They called it "zīrtys perzys" which translated to “frozen fire” in Valyrian and eastern tales tell of how their dragons would thaw the stone with dragonflame until it became molten and malleable. The Valyrians then used it to build their strange monuments and building without seams and joints of our modern castles.
When Aegon the conqueror forged his Seven Kingdoms, he and his descendants would often decorate their blades with dragonglass feeling a kinship with the stone. The royal fashion for dragonglass ornamentation soon spread throughout the Seven Kingdoms to those wealthy enough to afford it. Hilts and pommels were and are the most common decoration for dragonglass if too brittle to make a useful crossguard. Indeed, its very brittleness is what relegate it to the great houses and the most successful merchants.

So the only significance appears to be that it was once a Targaryen blade as it seems to be decorated in the same fashion as described in the book.

However, there may be more to it than that as apparently John Bradley, Sam, was told to linger on that page:

“It’s all part of the same universe,” Bradley told HuffPost about that moment, “and all of these storylines, no matter how spread out they feel sometimes, they are a lot of the same storyline and in the equation ... and if you think you saw something you probably did see something. It may not be what you thought you saw, but it just kind of feeds into this idea that [showrunners David Benioff and D.B. Weiss] have a plan, and they are playing the long game, and they are gonna plant the seeds.”

Though that could be referring to the story in general and not just about this dagger.

Not the answer you're looking for? Browse other questions tagged game-of-thrones object-identification or ask your own question.

29
Is Samwell Tarly a deserter of the Night's Watch?
6
Why are harmless books in restricted section?
14
What's on the plaque of the Valyrian Steel Catspaw dagger?
10
Do we ever find out who sent the catspaw after Bran in the show?
2
Are there any other unofficial House words?
3
Are there any mandatory subjects to become a maester?
12
Would Coldhands have been a White Walker or a wight?
13
How did Arya get her dagger back from Sansa?