I recall being somewhat impressed by a novel I read a few years back – this book may be less than five years old – which featured a college-aged man. He had a laptop which transformed into a troll goblin that served as his familiar.

In the story's universe, mages had switched to the Internet for most of their magic & communication. The main character was essentially a magical hacker, and spent much of the book fighting against his evil aunt (I think, I know it was a female relative) with the help of his cousin.

Older forms of magic were also featured, including using special paintings as magical portals, and spells being whistled by wizards. It features a scene at a gas station where the laptop is disabled by a virus, and the main character whistles a spell to reanimate dinosaurs from the gasoline.

Is this ringing any bells?

Was it perhaps Webmage by Kelly McCullough?

(I haven't read the book, mind you, just ran a quick Google search. :))

Ravirn is not your average computer geek. A child of the Fates—literally—he’s a hacker extraordinaire who can zero in on the fatal flaw in any program. Now that twenty-first-century magic has gone digital that makes him a very talented sorcerer. But a world of problems is about to be downloaded on Ravirn—who’s just trying to pass his college midterms. Great Aunt Atropos, one of the three Fates, decides that humans having free will is really overrated and plans to rid herself of the annoyance—by coding a spell into the Fate Core, the server that rules destiny. As a hacker, Ravirn is a big believer in free will, and when he not only refuses to debug her spell but actively opposes her, all hell breaks loose. 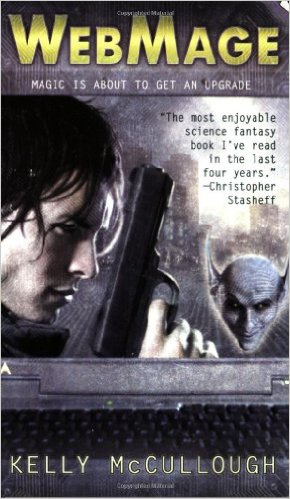 An excerpt from the book regarding the troll:

"Here, Boss. Drink this. The troll says it'll help with the pain."
"The troll?" I sat bolt upright, adrenaline overriding pain.
"Calm down," Melchior said. "Ahllan's not that kind of troll. She's a vegetarian."

Incidentally, Melchior is his goblin/laptop.

Not the answer you're looking for? Browse other questions tagged story-identification urban-fantasy magic or ask your own question.

15
Story about magic/programming with some Greek mythology
6
Story about fantasy creatures as computers
50
Why doesn't the wizarding world use computers?