If the galaxy far far away is really so big, how come it seems so small in the movies?

Another question of mine (How big is the space faring population in Star Wars?) was duped to a question that cited (presumably canon) information that the galaxy indeed has 100 quadrillion sentient beings on 50 million populated worlds.

So this begs the question: Why, in the movies, not only is this seldom shown (perhaps the map in the archive counts), but (in my opinion) often contradicted?

If the galaxy is really so big, the only explanation for the knowledge (and expectations) of our heroes is, that there is an elite subset of planets (and people) we are dealing with and that the other 50 million do not bother (then why have them?)

So why (if the galaxy is so big) is this seldom (if ever) shown in the movies, and, on the contrary, it seems more to be portrayed as a place where it is possible for a single person is able to know a large amount of it?

Major hubs and political centers will be known throughout the galaxy, like on this planet. Most people on our planet know there are cities named New York, Bejing or London. Few people will know a random hamlet on a road to nowhere. It's quite similar for famous people.

People relate to each other through such things to find at least some common ground to come together and talk about.

And not everything is common knowledge to anyone.

Tatooine for example in The Phantom Menace wasn't well known to the Naboo guard captain. He explicitly asked why Qui-Gon could be sure the Trade Federation would not hunt them there. Qui-Gon's only lead for that was that it was controlled by the Hutts. A fact he might have just read in the database when looking through systems in range.
In Attack Of The Clones Obi-Wan was rather oblivious to a system named Kamino which he even needed someone to point him to.
In The Empire Strikes Back Leia mistook Lando for the name of a star system and not a person. Her knowledge about the Anoat system on the other hand was probably because it was close to Hoth and also reasonably remote to have been scouted as a hiding place for the rebels.

Technology being usable by everyone

While technology itself gets more and more complicated, its usability gets easier. More and more things today are touch and gesture controlled. If you take an advanced enough society, Luke wouldn't have had to learn how to use specialized controls for an X-Wing when he could pilot a T-16. The computers would have done that for him. All he had to do is pull a stick and the computer executes the desired movement, throttle control etc. Just like modern planes are completely fly by wire now. Try stalling a modern jet plane and you will notice quite some problem with the computer not allowing you the respective maneuvers.

There are several mentions of people "flying under the radar". Most notable being Bespin for not being under Empire control... until Han and Leia swooped in. So there were people mostly unaffected by the Empire and its affiliates. The better question for them would be, for how long?

It is a question of perspective and perception.

First of all, when we say 'galaxy' we mean 'known part of the galaxy', which is significantly smaller. Sometimes, this reference is used in-universe to emphasize that the Galaxy is much larger than that we know of.

Second, all known history of our own world (ancient and middle ages) is usually centered on Europe and Middle East. In a similar way, the history of the Galaxy Far Away evolves around the events we see in the movies. There may be some bigger events happening in another part of the galaxy, but they may be not significant in this part, and the other way round.

So, answering your questions:

In the canon sources that I'm aware of there's never any depiction of space travel taking any significant amount of time. Chris Lough did an analysis, which gets quite detailed, but for our purposes points out that, according to canon (in 2014) sources, Tatooine and Alderan are nearly half the galaxy apart, and our fearless heroes didn't appear to be hanging out in the Falcon during the trip more than a few days. He gives them about 6 days, tops. It certainly didn't take them months or years. 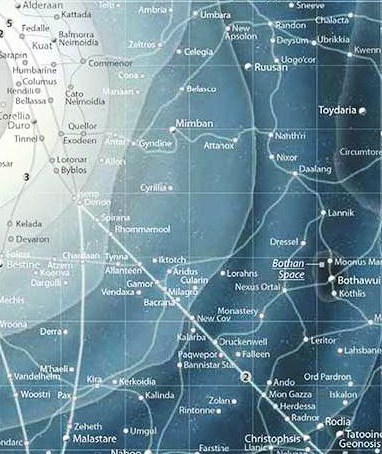 (Picture from the article showing roughly 1/4 of the galaxy. Gray area on the left is the core, darker blue areas on the right are nearer the rim, and the diagonal line represents a nearby established space route. Alderan is in the upper left corner, Tatooine and Geonosis on the bottom right. I believe the ultimate source for this was the Star Wars Essential Atlas)

This is roughly akin to how long it took to cross the Atlantic by ship at the dawn of the 20th Century. With communications that fast, local societies wouldn't really be isolated enough to develop the kind of total independence that would show up in them all having completely different technology.

For your first point, mostly they don't know the same places. It's expected that they've heard of the most significant planets (e.g. Coruscant or Corellia), but beyond that, none of them assume that the others know about those planets. Han clearly knows a lot of out-of-the-way planets (or at least wants the others to think he does), but then he's a smuggler and his business is moving illegal goods from one poorly-regulated place to another poorly-regulated place.

The Empire certainly didn't know the Rebels were on Yavin until they followed the tracker on the Falcon. After Yavin, they only found the Rebel base on Hoth by sending out literally thousands of scout probes to brute-force the problem. Even then, the Imperial generals thought they were just another smuggler settlement, and it was Vader's Force-based intuition which brought the fleet there.

There may well be a number of different designs of components out there, but it seems reasonable to guess that form follows function. In our world there are countless thousands of internal-combustion engine designs, but they all follow the same basic principles because that's the only way an engine can work. And if your engine died and you were in the middle of nowhere, a competent mechanic could extract an engine from something else and bolt it in. The result might not be pretty, but it'd work. To continue this analogy, if you know that this is likely to happen then the transmission can be designed to easily accept different drive shaft sizes and locations. It seems likely that Star Wars components would be designed in a similar way.

Also remember that the Star Wars from the original trilogy is a Vestigial Empire. The Old Republic was long past its best, well before Palpatine arrived on the scene. At its height though, there was substantial trade between all the millions of planets, and trade always includes technology. User interfaces tend to standardise by stealing the best ideas from each other, so it's completely believable that the basic controls for a lot of things would be pretty standard from one place to another.

This is really a question of storytelling. Just because something important is happening elsewhere in the galaxy, doesn't mean it has any immediate relevance to the characters the story is referring to. While it may seem like a "small world after all", it is like others(@WGroleau) have said, perspective. We are only concerned with the people we are introduced to and what happens to them. There are thousands of other stories like this in the galaxy, but to tell of them or reference them would detract from the interesting tale we are being presented.

Earth's population is expected to stabilise around 8 billion (after peaking around 9 billion).

So 50 million times 8 billion is 400 quadrillion, meaning the numbers in the canon are seemingly too small by a factor of 4. This does not even include nomadic space-faring races that live and die in space.

Even considering Lucas wrote this when the Earth's population was 3-4 billion, it was off by a factor of 2! He must have estimated 2 billion would the stable state, perhaps given the uncertain Cold War times.

It should be noted that the Star Wars novels were largely based on the history of the Knights Templar (a long time ago ...), and so Lucas might also have been counting on a Rapture event for his estimate (to knock off 1/3 to 1/2 of the population). Anyway, a better estimate would be 500+ quadrillion.

The term "Empire" is megalomaniac in its very nature. The Roman Empire considered itself to be the whole world, which it certainly was not. Similarly, the Galactic Empire should be considered hyperbole, and so the canonical numbers might have been duly distorted.

The actual number of planets in the Galactic Empire was likely very small, esp. considering its history at the time of documentation - it was a fallen republic, a Babylon exhibiting signs of corruption and internal collapse. The too small, yet still grandiose population numbers might indicate that.

Also the seeming universal familiarity with individual planets and even specific people and star ships would also suggest the Empire was far from galactic in scope. Lucas did a pretty good job of covering both ends of his estimate.

Hail Palpatine and everything! 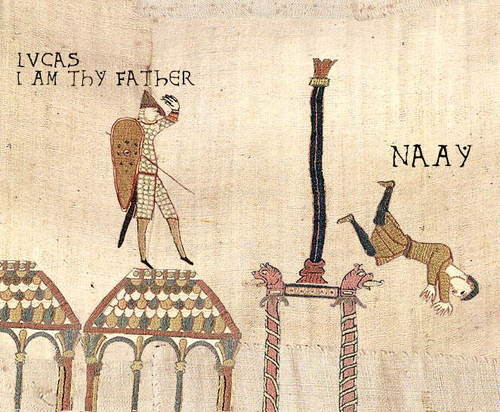 A story is something interesting that happened. We don't watch a movie about someone who signed up to fight in WWII, and then was killed first day on the battlefield. Instead, a movie is made about someone who survived, miraculously, against all odds.

Somebody is going to win the lottery (a spectacular event), but millions of others who play don't. An interesting story is made about the winner, not all of the people who didn't.

12
How big is the space faring population in Star Wars?