What coat of arms does Euron Greyjoy use?

Euron Greyjoy was banished by Balon:

Some time after the war, in 297 AC, Euron was sent away from the Iron Islands by Lord Balon as punishment for seducing or raping Victarion's salt wife, and he was warned never to return while Balon was alive. Victarion wanted to kill Euron and would have if not for the taboo against kinslaying.

I'm not sure on the exact terms of the banishment but it could be that he has been told he is no longer allowed to use the Greyjoy coat of arms.

What coat of arms does Euron use?

The show and the books differ slightly, however, in both he appears to still use the Greyjoy coat of arms.

It appears as though Euron only uses the normal Greyjoy coat of arms. The only time we see them is on the sails of The Silence: 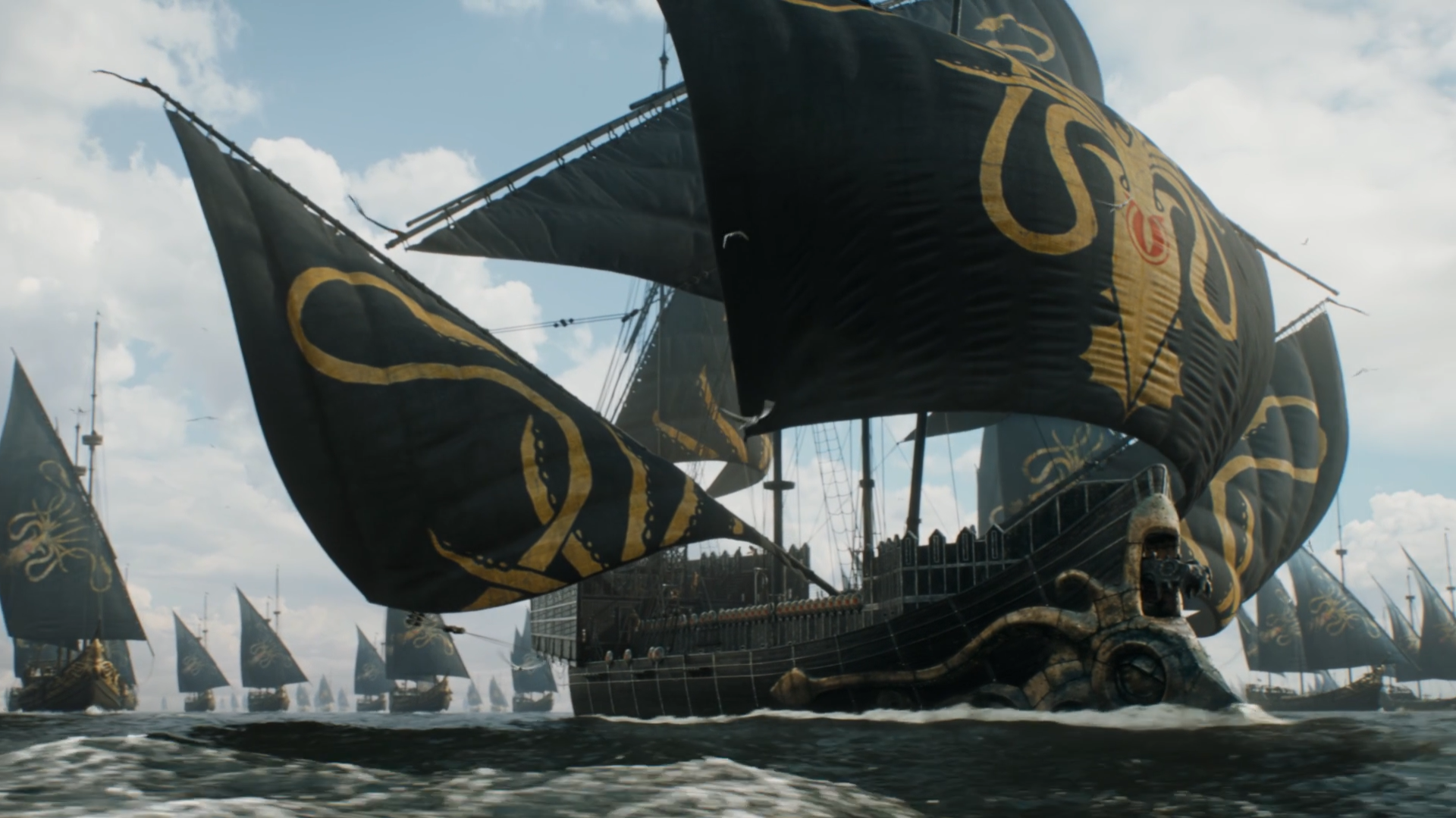 As @Sekhemty comments it appears as though Euron actually uses a slight modified version of the Greyjoy coat of arms by having a red eye in the middle of the Krackens head.

It appears as though Euron uses both the Greyjoy coat of arms: 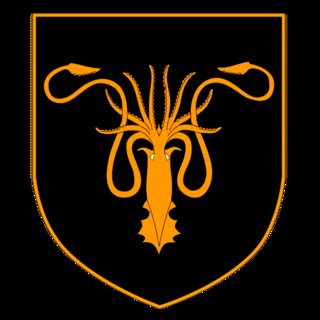 And that he also has his own personal coat of arms: 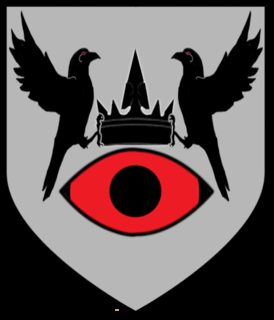 "Who would be so mad as to raid this close to Oldtown?"
Xhondo pointed at a half-sunken longship in the shallows. The remnants of a banner drooped from her stern, smoke-stained and ragged. The charge was one Sam had never seen before: a red eye with a black pupil, beneath a black iron crown supported by two crows. "Whose banner is that?" Sam asked. Xhondo only shrugged.
A Feast for Crows, Samwell V

This appears to be the only mention we have have his personal coat of arms so we don't know when he created them or when he started using them. However, as @Edlothiad points out, he is seen to be with his own coat of arms and his house's in the preview chapters for The Winds of Winter (Spoilers from the released chapters):

And so, Aeron Damphair returned to the salt sea. A dozen longships were drawn up at the wharf below the castle, and twice as many beached along the strand. Familiar banners streamed from their masts: the Greyjoy kraken, the bloody moon of Wynch, the warhorn of the Goodbrothers. But from their sterns flew a flag the priest had never seen before: a red eye with a black pupil beneath an iron crown supported by two crows.
The Winds of Winter, The Forsaken (Aeron I)

As you point out in your own answer, Euron used both a personal Coat of Arms and the one belonging to his House. 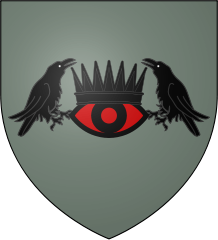 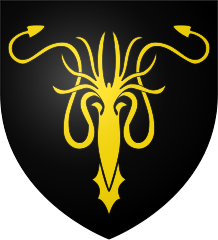 I won't report references as they would only duplicate what you wrote in your answer, and I'll focus on the other doubt that you raise in your question, whether Euron was legitimately allowed to use his Family's emblem.

We should consider that he was not the only exile that we know of, we have some more examples about characters that were banished/exiled from their homeland; we can try to find some common pattern:

Jorah fled Westeros to escape execution for participating in slave trade. He was still wearing his House's Arms in his self-imposed exile:

He [Jorah] was an older man, past forty and balding, but still strong and fit. Instead of silks and cottons, he wore wool and leather. His tunic was a dark green, embroidered with the likeness of a black bear standing on two legs.
A Game of Thrones - Daenerys I

He was exiled by the Mad King Aerys II during Robert's Rebellion, and Robert himself was not willing to recall him, being one of Rhaegar's closest friends and supporters; while in exile he concealed his identity as Griff, and hid anything that could sell off his disguise; but when he came back to Westeros and abandoned his disguise, he openly displayed his Arms:

Griff had let his beard grow out during the voyage, for the first time in many years, and to his surprise it had come in mostly red, though here and there ash showed amidst the fire. Clad in a long red-and-white tunic embroidered with the twin griffins of his House, counterchanged and combatant, he looked an older, sterner version of the young lord who had been Prince Rhaegar's friend and companion … but the men and women of Griffin's Roost still looked at him with strangers' eyes.
A Dance with Dragons - The Griffin Reborn

He fled from Westeros after his Trial accused him guilty. He had a bounty on his head so he concealed his true identity, using the names Hugor Hill and Yollo; we can safely assume that he was not openly displaying his family Coat of Arms, bu he did it for the sake of safety, there is no evidence that he was stripped (or willingly renounced) the right to wear them.

There are other characters that were not strictly exiled, but in a way or another were considered outlaws, so they loosely shared the status of banished individuals: in example Beric Dondarrion, Sandor Clegane and Brynden Tully; despite being outlaws, they were openly displaying their House or personal Arms, or did nothing to conceal them (which could suggest that it could be forbidden to wear them). It seems that even in this case, when they were not displaying them was more for not wanting to be recognized rather than a legal prohibition.

It seems that the status of exile or banished individual does not imply a prohibition to use one's House Coat of Arms. We have example of oucast characters from through all Westeros that carry them without much concern. While Iron Islands have a very distinctive culture, very different from the rest of Westeros in many respects, we don't have any indication that concerning Heraldry they have different rules. We can assume that the general trend could be valid even there.

As you point out in your answer, he is known to carry a personal Coat of Arms, but this does not mean that he was forbidden to carry his House's: we know of a long list of characters who had personal arms for many different reasons: being cadet sons, being bastards, pure vanity, and so on.

Moreover, Euron does not seem to be the person who could suffer to be imposed any kind of restriction; even if he was forbidden to use the Emblems of House Greyjoy, it could have be perfectly in-character from him to use them just for the sake of taunting and defiance.

It should also be considered that since after the Kingsmoot, there was nobody who could de facto challenge him; even if there was in fact a rule about this, nobody could impose him to renounce to them.

Having a personal Coat of Arms, then, does not prevent him to use it in conjunction to his House's, he could have used both of them depending on the situation: his personal one for personal matters and to disguise himself as Sauron to be identified as Euron himself, the Greyjoy's in his role of Leader of that House and as the Iron King.

10
What was Euron “Crow's Eye” Greyjoy doing in Valyria?
14
Why does Euron Greyjoy want to kill these people?
12
Where does Theon Greyjoy get the money for his hobbies from?
16
How does Euron travel so fast?
14
Why is Daenerys willing to let Iron Islanders secede but not the Northmen?
15
Which known Targaryens had personal coat of arms in addition to the three headed dragon of House Targaryen?
18
What coat of arms does Jon Snow use?
11
Why does the Valyrian Steel Oathkeeper use Dunk's Coat of Arms?
23
How did Euron Greyjoy manage to travel to Valyria and live?