Why did news media immediately assume that the squid was an alien invasion?

explains that they created a creature, referred to by fans as "the squid" in order to stage an alien invasion. In the next issue, we see that the news media, without prompting from the perpetrator, came to this same conclusion. 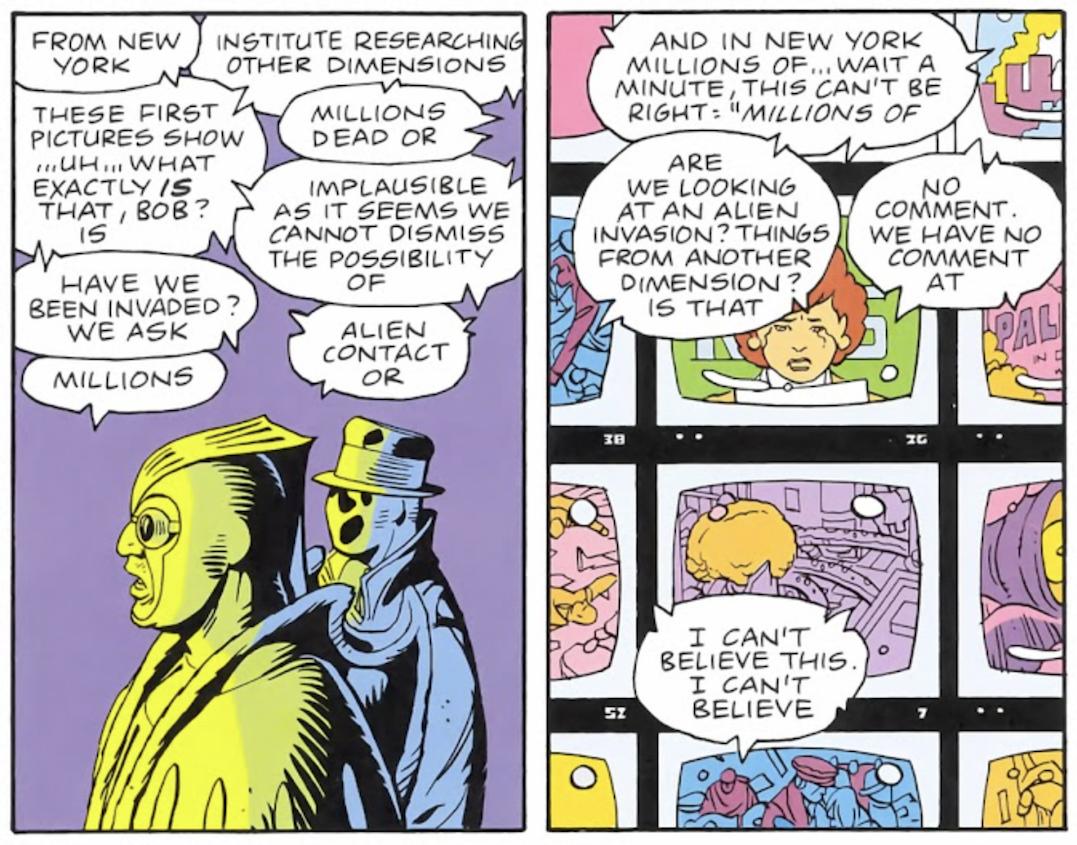 Have we been invaded? […] Implausible as it seems we cannot dismiss the possibility of […] alien contact or […] Are we looking at an alien invasion? Things from another dimension?

While there is some uncertainty, it definitely seems like the news media is settling on the idea that this is either an alien or an extra-dimensional being, and that it is the start of an invasion.

What led them to this conclusion mere minutes after the event? It seems to me like there are other equally plausible options, given the limited information:

Given these alternate explanations, why did the news media immediately come to the conclusion that the squid was an alien invasion? While this is the conclusion the perpetrator intended, I don't see any evidence that they influenced the media here.

The devil is in the details, and Ozymandias planned this well.

There are several establishing shots of the surrounding area, both before and after the "squid" impact, that show it materialized on top of and within a building labelled "dimensional research facility".

I also submit the highly likely speculation that this building was one of those labs that were part of the investigation into science uncovered by Manhattan's powers, and (slightly less likely, but naturally concluded to my mind) thus already on the radar as the media investigated Manhattan's cancer scare as well.

Given a majority of citizens in the area were dead, it's not like anyone inside or nearby could give a firsthand report as to what happened. If the media is already aware of the building and it's operations however, it would be easy to find reports inside, and even easier to control what those reports said about what was done, and to reach the conclusions that he wanted them to reach.

All this on top of more basic manipulations - he couldn't directly plant stories without giving the ploy away, but since he controls large portions of the media, the subtle engineering of public perception could have planted that idea long since.

My understanding of it is that a) the evidence is clear enough that it's real because multiple news networks have the scoops and b) Ozymandias probably engineered it that way, with "leaks" and "anonymous informants" feeding in info about alien invasions, possible weeks, months, or years in advance so that when the incident happened, people would fall the right way.

Not the answer you're looking for? Browse other questions tagged watchmen or ask your own question.

32
Why was Rorschach willing to forgive The Comedian's “moral lapse” with Sally Jupiter?
23
Why did Ozymandias think that the intrinsic field trick would work?
13
Did Rorshach know Edward Blake was the Comedian before the Comedian died?