Is the Triforce of Power inherently evil?

In the Legend of Zelda games, everyone knows that the Triforce is a rectangle with cool genie powers. In most if not all stories you get 3 pieces of Wisdom, Power, and Courage. Ganon always has Power, Wisdom to Zelda, Courage to Link. If you join them together you get the ultimate godlike powers.

There was a comic I read back in the 90s(not the Nintendo Power comic!) where Link actually gets a hold of the Power triangle. He begins to change into Ganon-before throwing it away and reverting to normal, while Ganon dove after the piece (lives to fight another day).

Now this side story is obviously not a part of the game, but it gets me thinking-if the Triforce of Power is power in it's purest form, is it by nature evil?

No, it isn't. We just always see it being used by a very evil guy.

From the script of Ocarina of Time:

The Triforce...the sacred triangle...it is a balance that weighs the three forces: Power, Wisdom and Courage. If the heart of the one who holds the sacred triangle has all three forces in balance, that one will gain the True Force to govern all. But, if that one's heart is not in balance, the Triforce will separate into three parts: Power, Wisdom and Courage.

Only one part will remain for the one who touched the Triforce... the part representing the force that one most believes in. If that one seeks the True Force, that one must acquire the two lost parts. Those two parts will be held within others chosen by destiny, who will bear the Triforce mark on the backs of their hands.

Ganondorf touches the Triforce in an attempt to use its wish-granting powers, but his heart is not in balance. He ends up with the Triforce of Power, while the other two pieces ultimately grant themselves to Link and Zelda.

Seven years ago, Ganondorf, the King of Thieves, used the door you opened in the Temple of Time and entered the Sacred Realm. But when he laid his hands on the Triforce, the legend came true.

Although I don't think the specifics are discussed, it's clear from the games that having one piece of the Triforce does grant some manner of special powers. Ganondorf seems to be more or less immortal even in his human form. However, there is no indication that the Triforce piece has granted him evil powers; rather, he is evil, and uses the Triforce to do evil things.

The Triforce grants wishes to those who touch it. Since the Triforce does not distinguish between good or evil, it allows both good and bad wishes.

It stands to reason the same goes for the powers of the individual Triforce pieces.

I don't believe the depiction of Link turning evil you reference is canon or based on canon details.

The games have never shown us anyone besides Ganondorf being granted the Triforce of Power, so we don't know when or how else it's been used. Based on the way the pieces of the Triforce grant themselves to humans, you could say the Power fragment is the most likely one to go to an evil person, though.

The tri-force was created by the gods, benevolent gods not the other kind.

"For while the supreme power of the Triforce was created by gods, all of its power can never be wielded by one. Knowing this power was her last and only hope, the goddess gave up her divine powers and her immortal form." 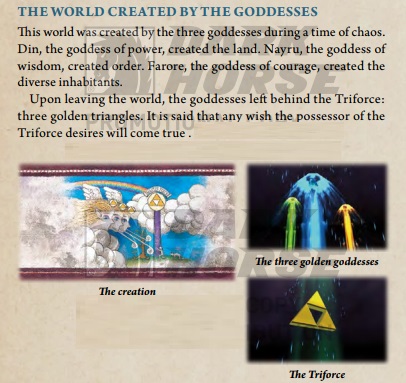 Moreover the prologue of The Adventure of Link reveals that the King of Hyrule used the Triforce to keep peace in the kingdom.

With this facts in mind I don't think it is inherently evil. Putting that aside in the Dark Horse comics it states that:

The Triforce grants wishes to those who touch it. Since the Triforce does not distinguish between good or evil, it allows both good and bad wishes.

PS: by the way it's a triangle

"The Triforce...the sacred triangle...it is a balance that weighs the three forces: Power, Wisdom and Courage."

The games have done a poor job ironing out details, which is a shame, sense it seems like every Zelda title made after the Super Nintendo is a book put onto a cartridge. To my recollection, we're given a reason as to why it's always Link, Zelda, and Ganon. What we're not given is a reason that would hold up in court as to why these individuals end up with this association of Tri-forces.

If we look back at the first Zelda (which because of time shenanigans is way far down the chronology of games), we see that the only mentioned "Tri-forces" are Wisdom and Power. Zelda's Tri-force of Wisdom was shattered to prevent its magical properties from stopping Ganon, who had stolen the Tri-force of Power. By the end of the game, Link retrieves this stolen artifact, has miraculously pieced back together Wisdom, and the kingdom of Hyrule now has its treasures back. Courage was not introduced until the second game, as a missing piece linked to a different Zelda and a part of Hyrule that no one seemed to want to talk about. The series staple "mark of the Triforce" makes its first appearance here, on Link and no one else (as illustrated in the Zelda II instruction manual)

Everything gets weird after this point, as Link to the Past (the third game) makes the Triforce appear only as a complete object that resides in an entirely different dimension, and worse yet, can talk. Then Wind Waker gives it physical form again... it's a mess.

The real meat of this answer is that for two games at the beginning of the franchise, no one treats the Tri-force of Power as if it's evil. It seems to simply give the person who possesses it some form of power, and like all powerful artifacts, it just happens to be the object of desire for someone who wants to use it for evil.

13
Why does the cycle of Link and Gannondorf keep repeating itself?
4
What are the properties of the Triforce of Wisdom
5
How are the pieces of the Triforce distributed?
13
Why is Ocarina of Time the splitting off point for the Zelda timeline?
12
Where are the towns of Hyrule in Legend of Zelda?
4
Is Linkle the daughter of Ilia and Link?