What is the final state of the Krenim Imperium?

During "The Year of Hell" (the ultimate reset-button episode), various changes in the timeline occur. This is due to Annorax' manipulation of the space-time continuum, by use of his weapon ship.

At the end of the YoH, part 2, Captain Janeway crashes Voyager into Annorax' ship and apparently erases it from existence---or at least erases the entire history of the "Year of Hell."

Annorax is shown with his wife in the final scene. He is working on temporal-incursion calculations.

This is confusing to me. His main goal throughout the episode is to restore his wife, and, through the destruction of his ship, this occurs. So, is Annorax working on calculations because the size of the Krenim Imperium (in his eyes) is substandard? This seems to be the case, as the attitude of the (same) Krenim officer is different in his dealings with Janeway. Perhaps this is caused by a sort of reservation on the part of the Krenim due to having relatively low numbers.

The implication seems to be that the Krenim Imperium is under severe attack from its comparatively more advanced neighbours. In various timelines it's dominated by the Nihydron, the Zahl, the Mawasi and (in the EU) the Vaadwaar, the Hirogen and the Malons. In the "nearly perfect" timeline we learn that at its height, the Imperium covers several thousand light years and nearly a thousand planets before being attacked by a coalition of outside powers, prompting them to experiment with temporal weapons in wildly successful attempt to avoid them being wiped out.

In the final analysis (per the excellent Star Trek: Star Charts), we see the state of the Krenim Imperium in 2374, a shadow of its former self and able to be circumvented by the Voyager with the merest of course corrections. 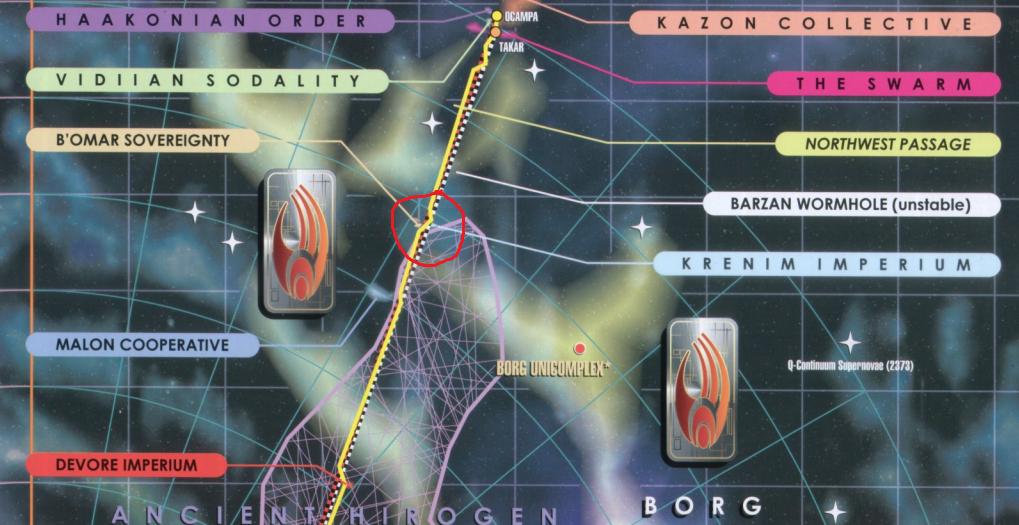 In the Star Trek Voyager Novel: Pocket Full of Lies, it is explained that Annorax did have a change of heart. He lived out his years on Kyiana Prime and actually advocated against the use of Temporal weapons as one of the greatest temporal scientist in Krenim history. Krenim Temporal Defense Agency was set up by him. However, I do think he retained the memories from the old timelines, he knew of Voyager and he likely used his knowledge of his mistakes to atone a little for the billions he erased. However, Annorax's creation of Krenim Temporal Defense Agency actually created some minor altercations of the timeline by these agents. Some of his ideals were kept as they did not do large scale temporal incursions, but they still try to manipulate timelines to Krenim benefit. Also, in the novel, Krenim Imperium has made Captain Janeway a high level security threat, like "omega molecule". I also gather from my reading of Star Trek DTI (Department of Temporal Investigation) novel "Watching the Clock" that the Krenim will be among the signers of Temporal Accords, aka they are a major faction in Temporal Cold War starting in the 26th Century. Not sure which side they're on, but seeing as Starfleet timeships in the 29th century are using their technology, i am assuming they do join Federation's side, if not become members, and mature a bit in their use of time travel.

So basically, my interpretation of the ending of Year of Hell II is that Annorax remembers what happened and he being both the father of Temporal technology and an anti-time incursion advocate, sort of like Einstein being the father of Atomic science and also being an Anti-Atomic Bomb advocate. If you interpret Annorax like that it makes a lot more sense.

8
Annorax and the Krenim Weapon Ship
20
What was Voyager's final crew count?
5
Why did the timeline revert back to its original state after Janeway destroyed the temporal core in the episode “Year of hell”?
10
Why does the watch that Chakotay replicated months ago to give Janeway gain energy by being recycled?
11
How did Voyager encounter the Krenim so soon when Kes hadn't ascended?
8
Where were the Vulcans during the final inspection?
16
Why did Captain Janeway feel that using the Doctor as an expendable messenger boy was more important than keeping him around to heal the crew?
11
What is the end state of a starship that has been assimilated by the Borg?