I found the title of The Killings at Outpost Zeta thanks to a thread on this site. Now, I´m again looking for another movie that is almost at the same level as the other one. I´ll try to make a synopsis.

They are being observed by a trio of aliens whose silhouette looks similar to a human shape, but they are covered in crystal. So we can not see their eyes and facial features.

What the aliens are doing is testing human responses to different stimuli, even though sometimes the humans respond harshly and violently to each other and kill some of them by playing the tests games the aliens give them.

In the end, when it seems the aliens finish the tests and the experiment on the human race specimens, one man appears walking on a dirt road and enter a bar. There he asks for a drink and whistles a tune. A woman listens the tune and stops, wondering why the tune is so familiar. So she approaches to ask, "Hey, excuse me", "Yes?", the man says, "Can you tell me where did you hear that tune?" The man stops whistling and thinks over. He seems confused. "I really don´t know", he says. "It just came to may mind." And then the woman apologizes for the bother and continues her way.

More or less what I remembered. I don´t trust my memories in the sequence because I might have not watched the movie form the very beginning. What I think is that the beginning is the end of the movie.

The idea of this experiment which seems unfair and careless, and then changes just to return all the humans to normal, except their erased memories, was an idea that stuck to me to these days, decades away that when I watched the movie.

So, I hope someone would help me again with this movie.

[I might be a bit late with this, but...] No wonder you were reminded of The Killings at Outpost Zeta. The movie you're looking for was made by the same people.

The movie in question is Laboratory from 1980, directed by Robert Emenegger and Allan Sandler and starring Martin Kove, Camille Mitchell and Corinne Camacho. It's about a small group of people who are abducted and wake up confused in a hospital-like building. They're constantly monitored by a couple of aliens covered entirely in crystals who look like human disco balls and who put them through various experiments and tests.

In the end, when it gets out of hand, the aliens decide to return the human subjects to their previous lives with their memories wiped clean, and the movie ends with the scene you described, where two of them come across each other in a restaurant and he whistles a tune she recognizes, but neither of them can identify it. Here are those shiny aliens: 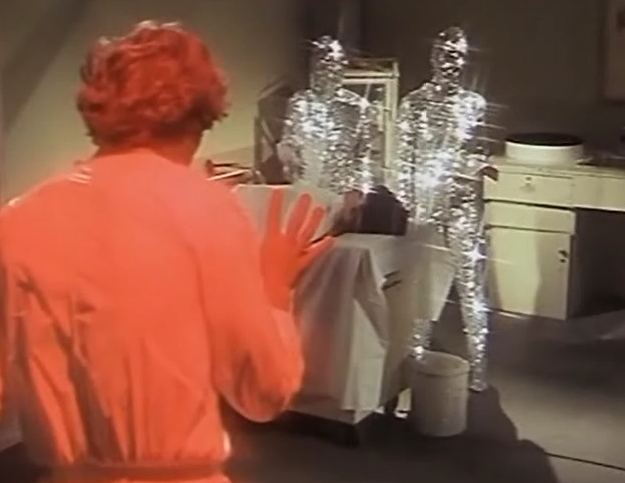 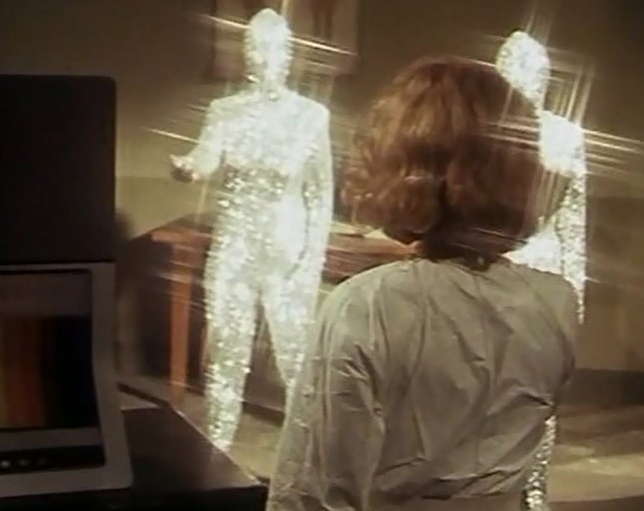 8
Movie from 80s-90s with humans trapped on alien ship while duplicated on Earth
22
Old scifi movie where aliens disguise as humans
9
Movie: Parents seek missing children. Aliens experimenting on humans
8
Movie: astronauts visit a Mars-like planet with aliens passing as humans, alien embarks the ship, which destructs before landing on Earth
5
Sci Fi movie involving alien brother and sister (not Witch Mountain) with telekinesis powers
6
'80s movie with a humanoid alien in a glass casket
20
Movie where a crashed alien spaceship is discovered on Earth, with frozen alien bodies in the walls of the craft