When was Spock's photo taken in the original timeline?

In Star Trek: Beyond movie, we saw this photo which Spock had carried from the original timeline: 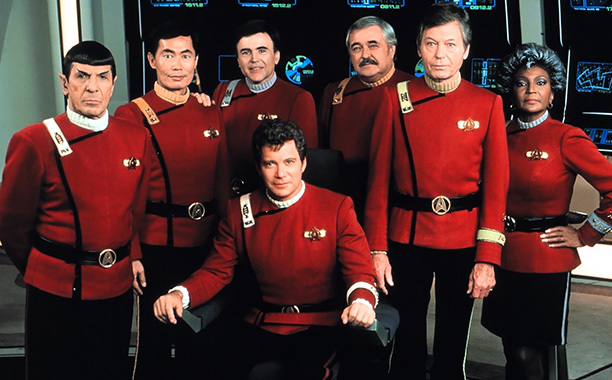 Can you deduce the capture date of the photo by using only clues in the photo itself (i.e. in universe items such as background, dress, actors' ages etc)?

If you look at the rank insignia, Kirk has reverted to the Captain's insignia, rather than the Admirals insignia. This places it after the events of Star Trek IV, as Kirk had not been demoted yet. Combine this with Uhura's distinctive hair (As noted by @NKCampbell in comments and excellent answer), and you can place it after IV and before VI (As seen with Uhura's hair in this photo).

You can also look at the design of the bridge screens. As seen in this photo for the bridge for the Enterprise at the time of Star Trek IV, it is much more bulkhead and "TV" type screens:

Compare this with an image from the bridge during Star Trek V:

This image shows the captains chair with arms and angled controls at the end:

As compared to the captain's chair from ST III/IV:

This is a publicity photo from Star Trek V: The Final Frontier.

So presumably, even though this is an out of universe publicity still, it is intended to be a voyage/mission photo from the shakedown cruise of the NCC-1701-A. (Much as NASA has been doing for decades) with a stardate as noted above.

As JohnP's answer states, the image in question is from an out-of-universe cast photo from Star Trek V: The Final Frontier.

The question is asking though, what clues in the image itself can be used to determine what time period the image was taken?

I propose that we can use Uhura's hairstyle as the primary clue. Specifically, the amount and particular style of gray hair she has.

For example - in Star Trek IV: The Voyage Home - she has little to no gray at all:

In Star Trek VI: The Undiscovered Country, her hair color is essentially the same as that in Star Trek IV: 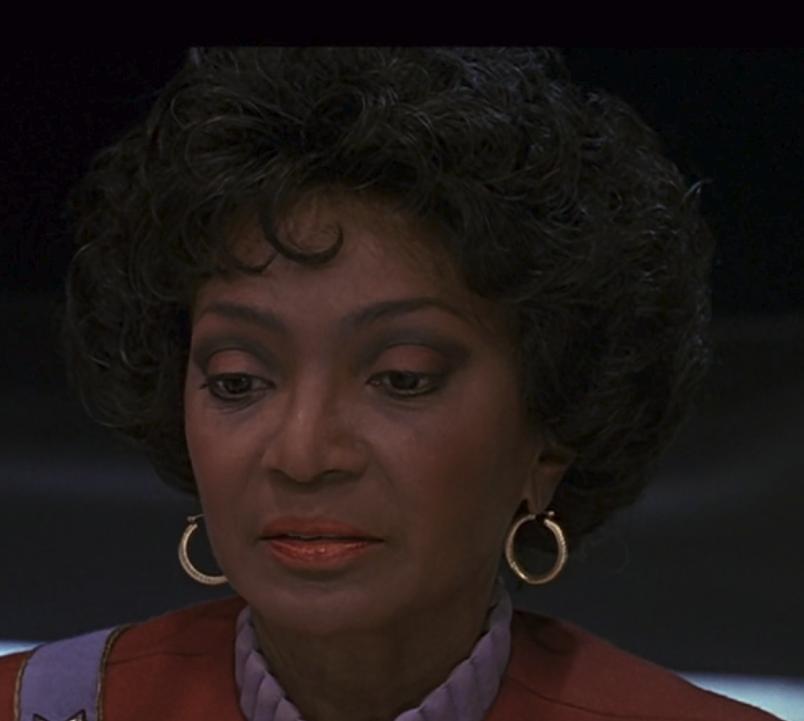 Yet, Star Trek V: The Final Frontier is the only time we see Uhura with this particular style and amount of grey hair: 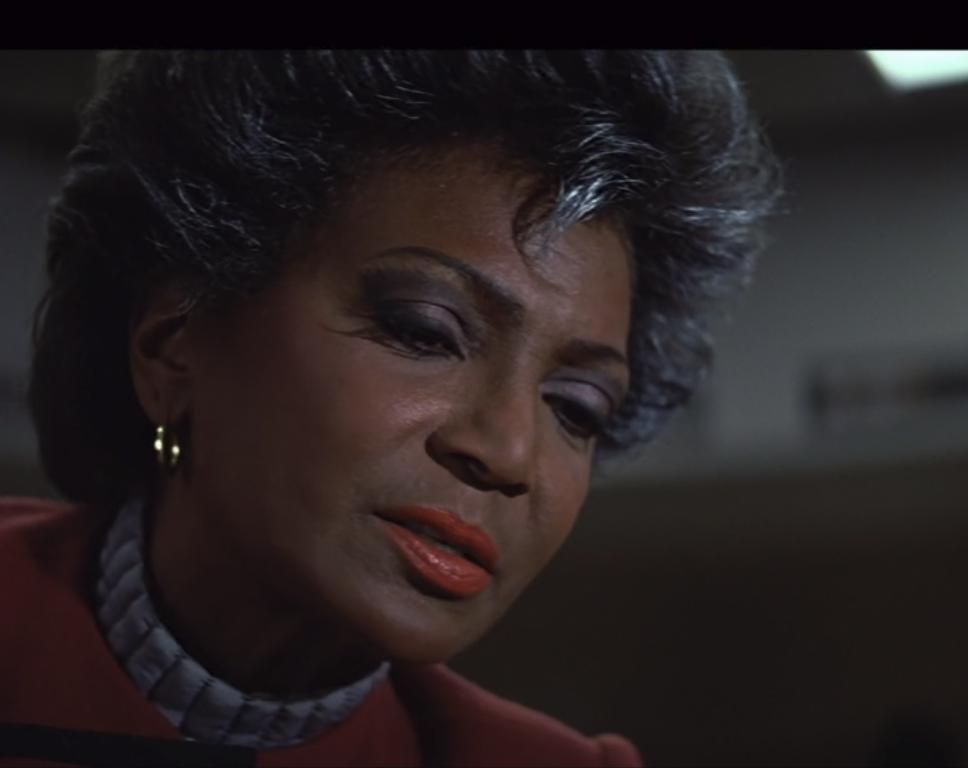 Additionally, Sulu has white undergarments in Star Trek VI, so the image can be assumed to be prior to his captaincy of Excelsior 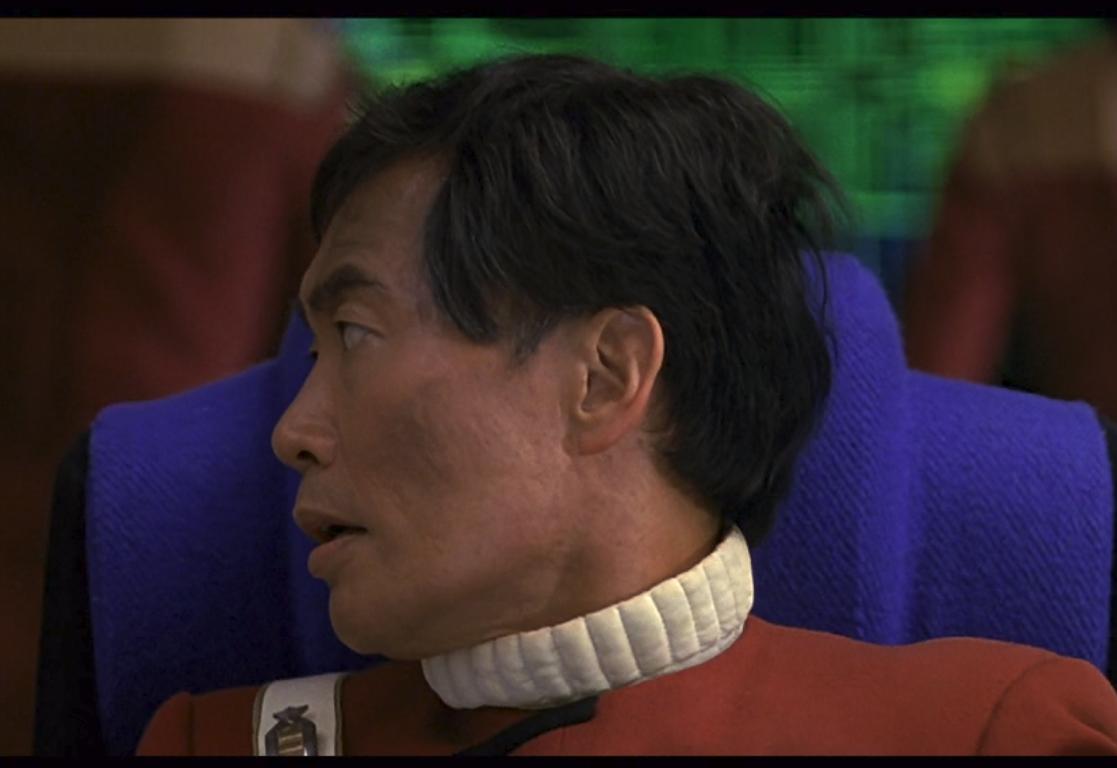 4
Where does Artemis stand in the Star Trek timeline?
25
Was Star Trek's original Captain Kirk always fond of antiques?
9
Why is the Star Trek 2009 reboot called a reboot?
39
What's the most recent specific historical element that is common between Star Trek and the real world?
7
Do Hand Phasers And/Or Disruptors Have An Auto-Target Feature?
2
Could a starship's impulse engine reactor produce enough energy to power the warp drive?
4
How old was Peter Preston when he entered Starfleet Academy?
19
Does Abram-verse Trek acknowledge the different physical appearences of the crew?
15
Did Kirk's captaincy of the Enterprise have a canon starting date in TOS?