I'm writing a story with a young captain and XO. Their parents who have been a part of the organization for decades more than them serve on the ship and have high ranks.

I want the parents to be heads of departments, ex. engineers, security, tactical, medical, science.

In Star Trek, a flag officer has never been shown on screen as a regular part of a vessel's crew. When an admiral is aboard a Starfleet vessel (as seen in Too Short A Season and The Pegasus, among others), he is there for a specific mission. He commands the mission, but he does not command the vessel. However, when the mission is over, the admiral leaves.

Star Trek doesn't use the modern definition of "flag ship". Real navies operate together, rather than the widely scattered formations you see in Star Trek. A Federation fleet is an administrative unit, rather than a functional unit. In fact, in Redemption and Redemption, Part II one of the few places you see a functional fleet is lead by a non-flag officer, Picard himself.

In a real navy, the presence of an admiral aboard1 is what makes a vessel a flag ship - the admiral is said to be "flying the flag" from the vessel. The admiral aboard is responsible for the fleet's overall mission parameters and decides where to go and what to do for the fleet at large (based on orders from higher up). The individual vessel commanding officers determine how to do what's been asked of them.

While the admiral aboard may have done the captain's job in the past, there is a hard break in responsibilities. The admiral and staff manage the mission, the captain manages the vessel. An admiral interfering in the vessel commander's designated role can lead to problems that trickle down the entire chain of command - it isn't done to avoid such problems.

Commonly, the vessel used as a "flagship" is selected because of the available facilities onboard. Modern US Navy aircraft carriers have large numbers of cabins dedicated to the admiral, admiral's staff, and their information and communications needs. The French even have a replenishment ship with flag capabilities.

Generally speaking, this means a "flagship" is the biggest, most modern vessel, and frequently well-known vessel. This is the context that Star Trek implies when they call the Enterprise a "flagship". It (theoretically) has flag capabilities, even when there is no flag officer aboard.

In many cases, officers such as medical officers, counselors, and engineers, don't take the Bridge Officer's Test because it doesn't help them with their job responsibilities. Crusher and eventually Troi take it because they want something more, they want to expand their skillset. There are many officers who have no such interest.

When the commanding officer and executive officer are off the bridge, one of the available line officers takes over. That's how somebody like Geordi can end up in command in early episodes, despite not having a high rank - he's taken the Bridge Officer Test as part of his training, others haven't.

In the real world, what we saw in Redemption would almost never happen. A lowly captain would not be in command of that many vessels and would not be managing a mission of that nature. That's the kind of thing an admiral would be onboard for. None of the interaction between Data and Picard would have happened, because Data would be dealing with the flag admiral aboard the Enterprise. It's more interesting for the audience to see interactions between established characters.

The same applies to Crusher and Troi. While there's no really good reason for health services officers to be trained for command, it's good character development. In the real world, you're not likely3 to find two MDs or PhDs serving on the same vessel as line officers.

Your older-and-higher-ranked concept is unrealistic. It is in conflict with basic organizational protocols. Such characters would not be part of the ship's normal complement or chain of command - in the long term, it would only create confusion and dissension. They could be onboard for a special mission, but they would leave when it's over.

1Assuming the admiral is aboard as active part of his duties, not as an observer or inspector (like McCoy in Encounter at Farpoint). Sometimes an admiral is along just because the ship is going the right direction, or to interact with some civilian dignitary onboard.

2Star Trek tends to be very officer-heavy, while real-world militaries are not. Chock it up to Hollywood.

One example would be Star Trek: TNG - Season 1.21- The Arsenal of Freedom

In which then Lieutenant LaForge is left in command of the ship. 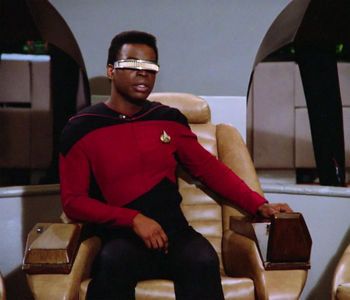 From the transcript of the episode, La Forge comes into conflict with Logan, who has greater rank and different ideas about how the mission should proceed:

LAFORGE: The best thing, Mister Logan, is for this discussion to end and for you to return to your duties. Now, I'm in charge until relieved by Commander Riker or Captain Picard.

LOGAN: You're ignoring my greater rank and experience.

I offer two examples that suggest this can happen.

During the training cruise in Star Trek II - The Wrath of Khan, Captain Spock is in command when Admiral Kirk is on board. When the Enterprise is called into active duty, Kirk tells Spock to retain command even though regulations specify the ranking officer should assume that responsibility. This suggests that sometimes it can be left up to the parties involved to decide who is in command even if regulations are clear.

In the ST-TNG episode "Future Imperfect" an alien named Barash makes Riker believe he is in the future and Captain of the Enterprise. In the illusion Captain Riker maintains command even though Admiral Picard is onboard. Riker eventually realizes he is in a false reality but it wasn't because of the command structure. Even though it was all an illusion, this example also shows that a situation could exist where a lower ranking officer retains command in the presence of a higher rank and it wouldn't be too out of the ordinary.

I can't quote you the exact episode but I do seem to recall Kirk escorting a group of Admirals one of whom takes over security or similar when they lose an officer. Something similar happens with medical in DS9 with a high ranking officer serving under Bashir for a time. So it can happen.

If you go with the fact that Starfleet is based on Earth traditions then there are a couple of things to hark back to; for example there are a number of navies in which the rank of Commodore exists to denote a Captain who is not in command of the vessel on which they are travelling/serving. Similarly the officer in charge of a vessel is often the Captain regardless of their actual rank and any other officer, like a ground force commander, who carries the rank of Captain will get bumped one rank higher in conversation to avoid confusion onboard. High command officers will often travel on the Flagship of a fleet but they won't usually take charge of the vessel directly but rather leave the ship in the hands of the existing Captain regardless of their actual rank. I don't know if it's actually ever happened but a 1st Lt. could Captain a vessel for a Fleet Admiral. Furthermore fleets often have heads of department in overall command of all the medical staff or engineers, or what have you, across the fleet; these commands are independent of what ship they are on and are generally posts given to those who have a high rank and many qualifications coming from long and distinguished service.

There's absolutely a precedent in the real world for this sort of thing. Roles are generally distributed by training and experience rather than rank in the Air Force--when I flew on large EWAR aircraft, there was a captain who had absolute control over the aircraft proper, and a mission commander who often outranked the captain who was responsible for the mission being run in the rest of the craft. In these cases, the "mission" was more important than the "ship". Without knowing your story structure, I could absolutely see a situation where a ship was chosen for a highly important mission headed by a higher ranking officer.

40
How could Picard take control of the fleet so easily?
29
Why was Admiral "Dr." McCoy inspecting Enterprise-D?
23
If the USS Equinox crew joined the USS Voyager, who would be captain?
25
If the Enterprise is the flag ship of starfleet, why is there no Flag officer on board?
10
Geordi's authority in Arsenal of Freedom
3
Is there any official correspondence between Starfleet and Bajoran Militia ranks?

10
What is the typical command structure and number of officers on a Galaxy-class starship?
39
Why does the EMH use the computer?
2
On Enterprise-D, what are the accommodations for lower ranking officers with families?
35
Why don't Starfleet ships default to having their shields up most of the time?
19
Why did Worf wear red in TNG Season 1?
23
Were the Maquis who returned on Voyager punished for having been Maquis?
3
Did the Dominion add suicide implants between 2374 and 2375?