Are there any canon or Legends truly 'Grey' Jedi?

Firstly, some clarification, as the term 'Grey Jedi' can carry multiple meanings. By 'Grey Jedi' I do not mean a Jedi who frequently goes against the will of the Jedi Council (such as Qui-Gon Jinn), nor do I mean a Force-wielder or former Jedi who is still generally 'good-aligned' but not a part of the Order (such as Ahsoka Tano). By 'Grey Jedi', I mean a Force-wielder that uses the Light side and the Dark side both, seeing the merit in both, and achieving balance between the two.

Fans have long speculated that Luke is, even if he chooses not to call himself by the title, a 'true Grey', as he arguably uses the Light and Dark side both during his final confrontation with Vader and the Emperor. It seems likely that our questions on the nature of Luke's 'alignment' will be answered in the upcoming film, so let's set him aside for a moment.

Apart from (possibly) Luke, are there any canon Grey Jedi in the Star Wars setting?

Alternatively, if there are none, are there any Grey Jedi in the Legends-level of canon?

There are a couple of candidates who might fit your description:

That both of these characters are vaguely-cosmic entities is probably not a coincidence.

Honourable mention goes to Quinlan Vos, a Jedi Master who learns the ways of the Dark Side in the novel Dark Disciple. He tries to balance the Light and the Dark but, without wishing to spoil too much of the novel, fails spectacularly.

You might also consider Asajj Ventress in the same novel, who teaches Vos to use the Dark Side without being consumed by it; but it's not clear that she really uses the Light Side either, so it's debatable whether she meets your criteria.

That being said, as I've mentioned on the site before, this trope is one that the Lucasfilm Story Group generally dislike, so you're not likely to see too much of this in any canon storytelling.

The most prominent Legends examples are the Je'daii Order from the Dawn of the Jedi comic series. One of the earliest Force-wielding organisations, they absolutely meet your criteria, believing that the ideal state of the Force is balance between Light (which they called Ashla) and Dark (Bogan): 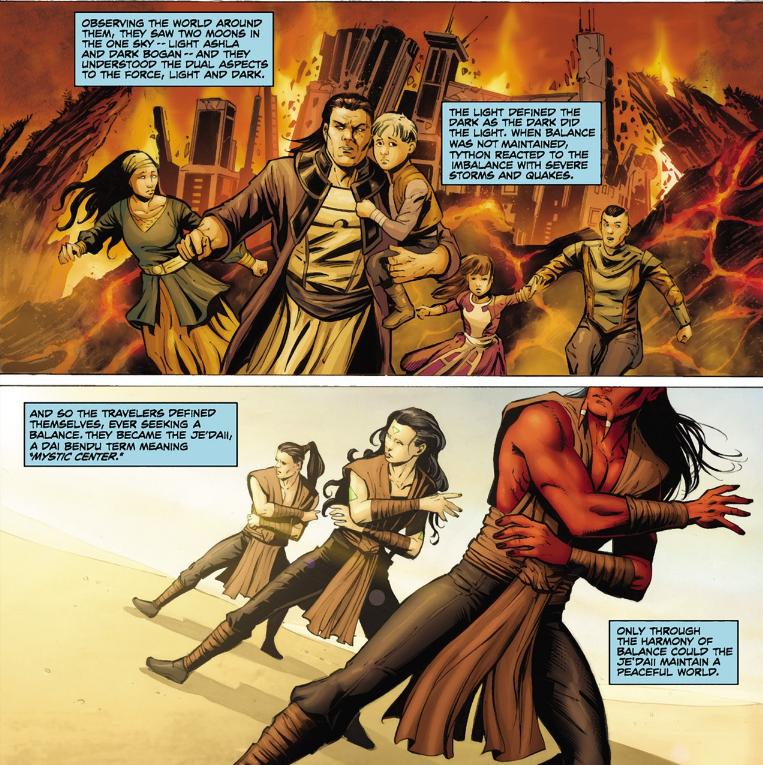 The Light defined the Dark, as the Dark did the Light. When balance was not maintained, Tython reacted to the imbalance with severe storms and quakes. And so the travellers defined themselves, ever seeking a balance. They became the Je'daii, a Dai Bendu term meaning "mystic center."

This eventually fell apart, as depicted later in the series, but there are a handful of individuals later who arguably take up their mantle.

But for your definition, Kreia, from the video game Knights of the Old Republic 2: The Sith Lords is probably the closest. By the time of the game, she's both a former Jedi Master and a former Sith Lord, but has given up both sides of the conflict; you can ask her about this at one point, and she pretty much word-for-word quotes your definition:

Kreia: Does it matter? Of course it does, such titles allow you to break the galaxy into light and dark, categorize it. Perhaps I am neither, and I hold both as what they are, pieces of a whole.

Whether or not she actually wields Dark or Light side powers (or both) is up to the player, but she's the only one who can effectively wield both in equal measure1, and she philosophically rejects the Light Side/Dark Side dichotomy. There's an interesting moral choice at one point in the game where Kreia chews you out regardless of which you pick:

That being said, even Kreia doesn't really meet all of your criteria; rather than seeing the merit in both sides of the Force, she sees them as equally flawed, and her goal is to "achieve balance between the two" in the most reductive way possible.

1 In the game, your alignment score affects how easily characters can use Light or Dark side powers; the more Light-sided characters get a bonus for Light-sided powers and a penalty to Dark-sided powers, and vice versa. Unless you play the game very carefully, Kreia is the only Force-sensitive character who maintains a completely neutral alignment2, meaning she suffers no penalties for using powers from either side

2 Jolee Bindo, a character in the first Knights of the Old Republic game, comes close here. But despite professing to "see more grey than dark or light", in the end he turns out to be a Light-sider (if you choose the Dark side, he proclaims himself to be a Jedi and attacks you), foreshadowed by the fact that his alignment is ever-so-slightly Light-sided

I've seen many argue that Mace Windu was a grey as he practices form VII saber combat (Vaapad). According to wikia: "As time passed, knowledge of Form VII became restricted among the Jedi Order, whose members were worried that its precepts would lead practitioners toward the dark side."

Mace also had no qualms letting his emotions flow. He on many occasions exhibits anger, hubris, and jealousy. But in the end he decides to kill Sidious, so that may put him on the dark side of the spectrum.

13
Is there a logo for the Grey Jedi code in the Episode 8 trailer?
8
What are Grey Knights/Grey Jedi exactly?
6
Can you wield the power of the dark side and not be tempted by it?
4
Grey Jedi vs Light Sith vs Dark Jedi - What the difference?

3
Did Barriss fall to the Dark Side?
6
Are there Light side powers and "Light Jedi"?
7
Which Jedi have served in the Rebellion?
14
Did Luke know about the other Rebel Alliance Jedi?
10
Why can't Jedi tell who can be mind tricked?
3
Grey Jedi, do they have their own name?
5
Has there ever been a red Twi'lek who wasn't a Dark Jedi or a Twi'lek Dark Jedi who was not red?
4
Are There Any Star Wars Stories That Exclude The Force?