I'm looking for a book I read in the late 1960s. The storyline features cars attacking humans in a sort of rebellion. I think the title was some variation of Long Weekend or Three Day Weekend, but that turns up no results. This predated AI or computers in cars, but anticipated automobles developing an intelligence of their own (from memory!)

You were close. The Four Day Weekend (ISFDB) by George H. Smith. 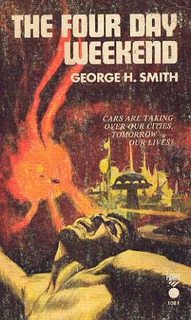 Found by searching on ISFDB for titles with "weekend" and looking for 1960s books.

The blurb is transcribed in this review:

It was impossible, of course, because the machines had been ruling everything for 100 years, so what could they revolt against?
They decided people had outlived their usefulness to them, and that genocide of 4 billion people on Planet Earth was the best policy.
And into this incredible situation Charles Henry Hyde was thrust, with a shrew of a wife named Agnes who nagged like it was 1966...

21
I'm looking for a book series about a Queen that time travels to save her people
6
Looking for story about AI in cars
18
What short story published in Analog has a genetically-engineered “null” protect a soldier from death?
9
Bad guy turns to stone because he hears a dog speak. 60s/70s 'Jackanory' story set in Australia
19
TV series involving some kind of global phenomenon affecting people, in which there are also mass deaths of birds