I first got my hands on the book about 12-15 years ago at a local library and haven't had luck finding it since. Sadly I don't know the name of the book or the author and all I have to go off of is the cover image and the very few details I remember, though I was in early middle school at the time and the book was above my reading level.

In the beginning of the book it was following a female character who was in hiding during a war. She had to keep her hair dyed dark to hide her heritage, this included all hair on her body, not just on her head. The cover image was a man in a gas mask riding on a dragon while the background looked like an active war zone.

Could it be Harry Turtledove's Out of the Darkness? The cover seems to match your description. It was published in 2005.

THE CLIMACTIC CONCLUSION OF A WORLD WAR

As the Derlavian War rages into its last and greatest battles, allied nations maneuver for advantage over one another in the postwar world. But before that time can come, the forces of Algarve, Unkerlant, and their allies must clash a final time, countering army with army and battle magic with ever-more-powerful battle magic.

In the midst of it all, the people the war has battered and reshaped must struggle to face their greatest individual challenges, as loves are shattered and found, terrible crimes avenged...and some journeys end forever.

Nor will the end of war bring lasting peace... 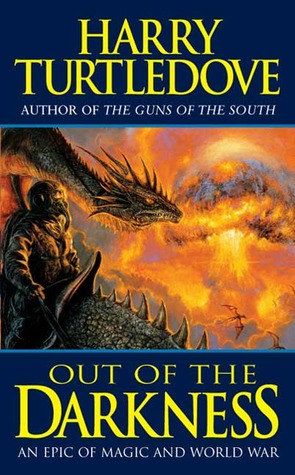 Not the answer you're looking for? Browse other questions tagged story-identification novel cover-art or ask your own question.

19
What medieval fantasy novel features a firey red head female protagonist with medical skills?
9
80's children's fantasy book with a cat on the cover
29
I am looking for a story of gods/deities creating a world, then assigning a boy to name everything in that world
9
Looking for the Name of a Young Adult Fantasy with Giant Eagles Attacking a Canoe on the Cover
6
Fantasy novel in which protagonist battles against sorcerous empire with troops immune to pain?
8
Dragons, People, Shape shifting, A book forgotten
9
Looking for title of a fantasy fiction with huge war, invader on airship with warlock, island fortress with sorcerer, mnemonic storyteller and dragon
10
2000s (or earlier) novel featuring a fantasy creature with an overwhelming obsession with chocolate
8
Young adult fantasy trilogy about a boy with healing powers and a girl who is really a dragon