Why does Madame Vastra wear a veil, considering Strax?

Madame Vastra, a Silurian, often goes around Victorian London in a veil to protect her identity and to help her blend in with the crowd.

However, she does this when accompanied by Jenny (a human) and Strax (a Sontaran). Now Jenny won't raise any eyebrows from passers by. But Strax is quite noticeably alien. What's the point in wearing a veil when you're accompanied by a miniature potato alien?

As the photo below shows, the veil doesn't even stop anyone from seeing her face. 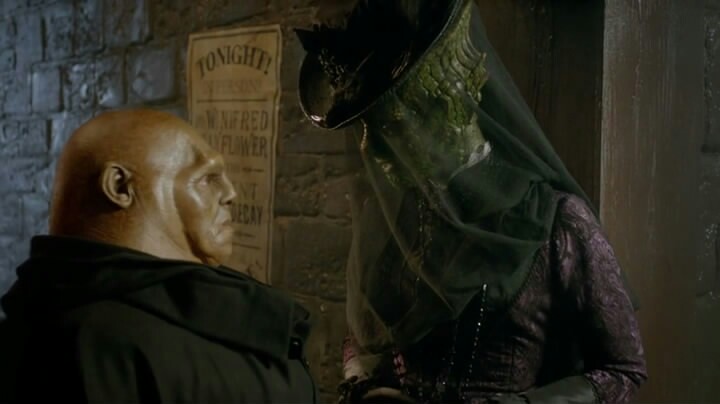 On several occasions (for example, in The Crimson Horror) Strax's appearance...well...somewhat unnerves potential clients. If Strax is freaking people out then there hardly seems much point in donning a disguise.

Surely we can't suppose that the veil was a fashion choice. Why exactly was Vastra so intent on wearing it?

From a real-world viwepoint, the veil does not obscure the character's face because we want to watch the actor act. It's only a visual conceit.

In-universe, it is likely much thicker, and more obscuring. And as alluded to in a comment above, it's very possible that it can change its opacity, depending on how necessary the disguise is needed. Clara is told the veil vanished "once [she] stopped seeing it"

If there's one thing that we've learned in the series, is that humans are very good at writing off things they can't understand with the slightest of explanations. So hand-waving off Strax as a neckless, bullet-headed thug from Forn Parts would be relatively easy. A lizard woman would need a bit more work.

And a lesbian relationship would require even more, which is why that too...wears a veil, if you will.

24
Why does the Doctor favor Earth?
5
Of all the humans the repair droids could have chosen, why Madame de Pompadour?
11
Why didn't the Doctor use the TARDIS to return to Madame De Pompadour
5
Can Madame Vastra use her tongue like some other Silurians?
9
Why does River Song react the way she does to meeting Donna?
8
Why does the Doctor wear a different suit in “Hell Bent”, and where did he get it?
2
Why did the Doctor look scared after Vastra said “they've seen you”?
4
Why does The Sixth Doctor look like Commander Maxil?
16
Why did The Veil accept old truths?