Cartoon that aired somewhere between 2000-2010 similar to Digimon

I was really young so I only remember that in the first episode a group of kids get on a train then suddenly their monster avatars (in which they can transform later) appear for a split second.

The main guy gets his ability to transform first and it is some red monster I think. Then in the second episode I think they encounter in the forest they are in some kind of monster that can make you dream nightmares so it starts implanting them in every singe one of them.

I think the rival of the main kid transforms for the first time into some white cat tiger I think and that's it. I don't remember anything else but it is possibly from Japan(?).

I think you are talking about a spinoff of Digimon called Digimon Frontier.

In it 5 children are chosen, and sent into the digial world via a "Trailmon". During the first episodes, they have to discover their monsters, during which time 5 opposing warriors begin to hunt the kids. 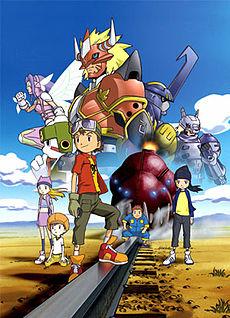 5
Cartoon with three heroes - one strong, one fast and one that could change into animals!
5
Anime - Boy with a gem on his forehead could transform and combine, as could a cat and another person
5
Show that I watched on Cartoon Network, about teenagers who could transform to monsters
8
Cartoon in which some kids can transform into warriors and fight against evil forces
7
Cartoon where characters would fight with capsule gauntlets that shoot out small creatures
11
2000s animated series: time traveling/teleportation involving a golden egg(?)
5
Anime where people summon monsters using gun-like devices that carve patterns in the air
8
Cartoon series about a monster family that solves mysteries