Probably written in the 1950's, this was a science fiction short story about a couple of guys who use radar technology from WWII to be able to see into the past. They film what they see and release movies of great events, such as the battle of the Alamo. They discover, however, that many events did not occur as told in history books. They have to recreate some falsehoods with actors to make the movies marketable. At the end, they make some mistake that causes the Federal Government to realize what they're doing. I think they filmed Pompeii being engulfed in ash and lava. 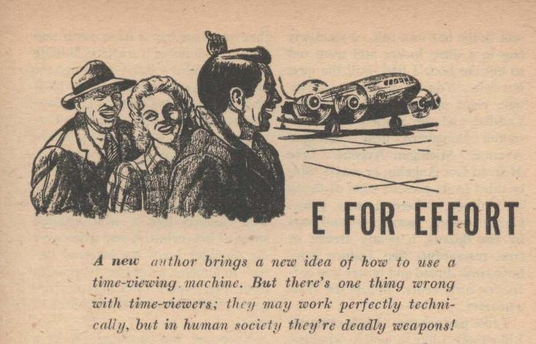 I'm not entirely sure it's radar the protagonists of this story use (although it may be) but they definitely make movies of great events, as you say.

They eventually get into trouble by filming controversial events (religious things, I think, and secret governmental things that led up to the 2 World Wars) and planned to turn their invention over to anyone who wanted to use it.

I was never sure exactly why (it's been a long time since I read it) but the inventors get put on trial, and finally, somehow, the invention sparks a war, perhaps because of the governments of the world's zeal to make sure it isn't used to reveal any more of their dirty little secrets.

There is a more detailed summary on Wikipedia here.

5
Movies of the past

13
What's the title of a short sci fi story about how the universe doesn't want the past to change?
16
Short story about a man who can see a year into his future?
6
SF Story identification, short story published 1940s, 1950s, immortal Neanderthal
2
1950s short story: alien ship and vampires
13
Short story about Humans using scams to overcome Alien Conquerors
19
Time travel short story where a man arrives in the late 19th century in a time machine and then sends the machine back into the past
7
Short Story About The Afterlife And Worm