Trying to identify a book about male teen with psychic powers, published before 1995

What I remember, I think the city was underground. The protagonist was a male teen, possibly with psychic powers.

I do remember a scene where the protagonist was mentally going on about zero calorie food when he was in a lift (Elevator). I also remember at the end of the book he had to change the shade of his skin.

He had a background of a gifted school or something, and also the main protagonist had a female friend from the same school. I think he worked at/near a bar. The lift scene thought process was brought on because fat people were in the lift with him. I think the cover had him on a flying/hovering machine.

I'm forty one and I read this in my teens. So nothing published after 1995.

You may be conflating two stories, but the majority of your description matches Daniel Keys Moran's The Long Run, part of his Continuing Time series. Trent Castanaveras is a Player, something like a glorified programmer or web dancer. He uses an Image (basically an AI software program) to help him interact with the internet. He's also a gifted thief and is on the way to discuss a job when he runs into the overweight French women on the elevator.

He was gengineered as part of Project Superman which was trying to create warriors. What they got were telepaths--all except for Trent. The woman you're thinking of is Denice Castanaveras who is the daughter of Carl Castanaveras and Jany McConnell, both telepaths. Both have been in hiding since the rest of the telepaths were destroyed by the government.

His "cover" story is that he repairs computers and other appliances--he lives upstairs is a highly modified apartment. He does visit a Temple / restaurant later to deal with some local gang issues. One of his BFFs is Jimmy Ramirez, ex-boxer who wants to become a lawyer.

The original cover is a picture of an aircar rising next to a skyscraper and is by Jim Burns. 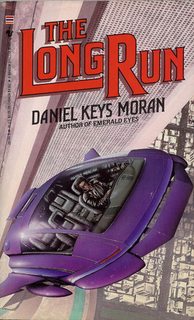 It's been released in limited editions by DKM, and is available as an ebook.

Not the answer you're looking for? Browse other questions tagged story-identification books psychic or ask your own question.

7
What trilogy of books is about a family of genetically altered children who grow up to take over the government?

7
I'm trying to find a book I read in the 70's about hive minds / psionics
7
Fantasy book about elves and spiders I read when a teen
8
Book series about these teenagers with special powers and every book changed main characters
4
80s TV show about kids with psychic powers saving the world from shapeshifting aliens
7
Novel series about a group of 6 teens with powers (cause-and-effect, metabolism, bacteria, etc.)
12
Identify series about a psychic / 'Space Wizard' who heals cultures