Whose wand did Bellatrix use at the Battle of Hogwarts?

In Harry Potter and the Deathly Hallows, Bellatrix was relieved of her wand by Dobby at Malfoy Manor. The wand was in Hermione's possession when Harry and Co. infiltrated Gringotts. Later, Bellatrix obviously participates in the Battle of Hogwarts. So whose wand is she using? I am assuming she was unable to buy a new wand, as Ollivander's shop was closed and Ollivander escaped Malfoy Manor with the rest of them.

She could have asked to borrow one, like Voldemort borrowed Lucius'

(which was destroyed by Harry's wand on the night Mad-Eye Moody was killed).

Draco also needed a wand, so he borrowed his mother's (in the movie at least; I don't recall what the book states). So Bellatrix wouldn't have been able to borrow her sister's wand. So whose wand did she use?

At the risk of asking two questions in one post, would the borrowed wand in any way reduce her effectiveness in dueling?

She has a wand, but it's unclear how she got it.

Bellatrix did get a wand after hers was stolen. It's unclear how exactly she got it, but it isn't mentioned as being anyone else's wand, like Narcissa's or Draco's. In the movie, we see her new wand, and it doesn't look anything like any of the Death Eaters' wands. 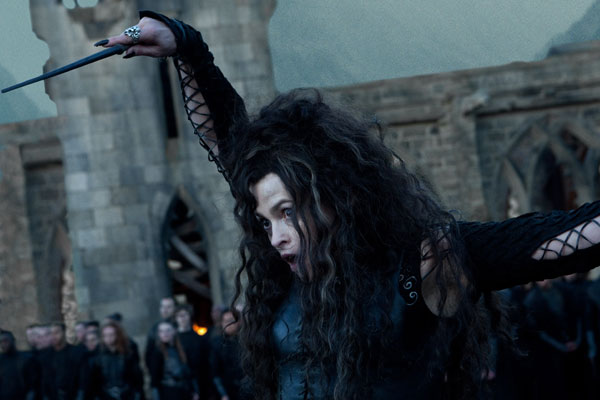 There are several ways she could have sourced herself a new wand.

Another thing to remember is that once Ollivander was kidnapped, his shop was left empty. Even after he was freed from the Death Eaters, he was in hiding, and would have still left his shop empty. The Death Eaters could easily have looted it somehow for wands.

In addition, Harry mentioned that they left two wands at Malfoy Manor.

“We left your wand and the blackthorn wand at the Malfoys’, Hermione.” Harry Potter and the Deathly Hallows, Chapter 24 (The Wandmaker)

It's likely that using a different wand affected her dueling skills to some extent.

Dueling with an unsuitable wand certainly can have negative effects.

Harry wasn't able to use a Snatcher's blackthorn wand nearly as well as his own. He described it as making even his simple, minor spells less powerful and effective.

The spider did not shrink. Harry looked down at the blackthorn wand. Every minor spell he had cast with it so far that day had seemed less powerful than those he had produced with his phoenix wand. The new one felt intrusively unfamiliar, like having somebody else’s hand sewn to the end of his arm.” Harry Potter and the Deathly Hallows, Chapter 20 (Xenophilius Lovegood)

In addition, Hermione was barely able to stand having Bellatrix's wand, since it felt like a part of her.

“Hermione looked frightened that the wand might sting or bite her as she picked it up.

‘I hate this thing,’ she said in a low voice. ‘I really hate it. It feels all wrong, it doesn’t work properly for me … it’s like a bit of her.” Harry Potter and the Deathly Hallows, Chapter 26 (Gringotts)

Bellatrix could have also felt like the wand was a part of her, and for her that would be a benefit since it was so attuned to her. Ollivander says the relationship between a wizard and their wand is very important.

“The best results, however, must always come where there is the strongest affinity between wizard and wand. These connections are complex. An initial attraction, and then a mutual quest for experience, the wand learning from the wizard, the wizard from the wand.” Harry Potter and the Deathly Hallows, Chapter 24 (The Wandmaker)

Simply by having and using her wand for so long, Bellatrix's wand would have been more attuned and connected to her than a new one, even one perfectly suited to her, because she's had hers for longer and it's had time to "learn" from her.

The only time we see her use the wand is during the Battle when she fights Hermione, Ginny, and Luna, then Molly Weasley.

Bellatrix was still fighting too, fifty yards away from Voldemort, and like her master she duelled three at once: Hermione, Ginny and Luna, all battling their hardest, but Bellatrix was equal to them
Deathly Hallows - Chapter 36: The Flaw in the Plan

The only time the wand itself is mentioned is off-handedly during the duel with Molly.

‘OUT OF MY WAY!’ shouted Mrs Weasley to the three girls, and with a swipe of her wand she began to duel. Harry watched with terror and elation as Molly Weasley’s wand slashed and twirled, and Bellatrix Lestrange’s smile faltered, and became a snarl. Jets of light flew from both wands, the floor around the witches’ feet became hot and cracked; both women were fighting to kill.
Deathly Hallows - Chapter 36: The Flaw in the Plan

So while we know she has a new wand, we have no idea how she got it. It could have been made, stolen from another witch or wizard, or taken from the body of a victim. There is simply not enough information available to us to know.

In regards to whether or not it affected her ability to duel. Maybe? Its documented that using a wand not your own causes a difference (Harry and the Blackthorn wand), but it is not always the case due to the temperaments of wands (Dragon-heartstring wands, for example, tend to respond to whomever. Like Draco's wand becoming Harry's after Malfoy Manor). Additionally, this new wand could have been hers now, just made by someone besides Ollivander. So again, we don't really know.

Not the answer you're looking for? Browse other questions tagged harry-potter wandlore death-eaters or ask your own question.

66
How did first years obtain wands during Harry's 7th year?
39
How was Molly Weasley powerful enough to Kill Bellatrix Lestrange?

1
Voldemort using Lucius' wand; did he master it?
10
How can Ollivander tell a wand has changed allegiance?
37
Why did Voldemort take the wand of one of his most loyal servants?
18
Why do wands work for a wizard when disarmed/borrowed, but not while purchasing?
8
When did the Elder Wand realize its owner has been defeated?
39
Why didn't Bellatrix volunteer to lend her wand to Voldemort?
21
Is there any reference to which wand Ron uses after the Battle of Hogwarts?
9
What happened to Hermione's wand after that it was confiscated?
1
Is Ron Weasley the master of Bellatrix Lestrange's first wand?