Does Romulan culture recognize the Katra?

As an off-shoot of the Vulcan race, I'm assuming that they also have a Katra(?). I'm wondering if the Romulans ever try to hold onto a deceased person's Katra. I know life is cheap to them, but I had to ask and see if anyone knows the answer.

Do they actually care enough about anyone to hold on to a Katra, and for that matter, since they're so untrusting, would any of them try to put their Katra into someone else at the point of death?

There's no specific confirmation in any of the TV shows, films or official novelisations whether (or not) Romulans have a Katra. Their general lack of telepathic abilities would suggest that they don't have the ability to use them to transfer knowledge, but then again, who knows what goes on at the highest echelons of Romulan society or behind the closed doors of the Tal Shiar...?

We have a couple of Extended Universe sources that indicate that Romulans almost certainly don't have Katras, or at the very least if they do, then they're entirely unable to do anything useful with them;

In Starfleet Academy #15 - T'Priell Revealed, Part II of III we see a Romulan archaeologist and specialist in proto-Romulan cultures who doesn't know what a Katra is, nor how to use one. This seems proof-positive that Katras aren't a thing in Romulan society. 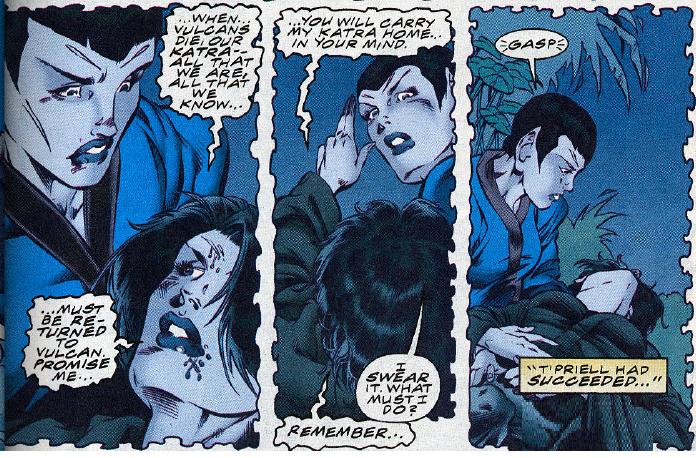 In TOS: The Lost Years we find that the teachings of the 'mind-lords' (instrumental in allowing the Vulcans to learn how to control and share Katras) never made it to Romulus when the early Romulans split from the Vulcans. It would appear that their telepathic powers are crude and ill-formed in comparison and that the level of mental sophistication required to share a Katra would be well beyond them.

“When the Romulans separated from the Vulcans,” Spock continued, “none of the old High Masters went with them. Those on Vulcan, after Zakal’s death, chose to align themselves with Surak. The discipline underwent a radical change in philosophy. The path of Kolinahr still harnesses great mental powers—but, for the sake of peace, applies them inward, to the control of one’s mind and emotions, rather than using them to control individuals and the outer environment.”

All living beings have a Katra.

But @Valorum's answer is correct - there's no evidence that Romulans are aware of it, or can "use" it.

STAMETS: I got to say, this Katra stuff is way cool. An uncharted superhighway connecting all of conciousness and life?

Not the answer you're looking for? Browse other questions tagged star-trek star-trek-tng star-trek-enterprise or ask your own question.

10
How does a Romulan quantum singularity work?
16
What genuine references are there in Voltaire’s “U.S.S. Make Shit Up” song?
8
Which order should I read the Humble Bundle IDW Star Trek comics in?
13
Is Sisko referring to the events of First Contact here and if so how does it affect things?
10
When did Tom Paris and B'elanna Torres get married?
25
Did the creators of Into Darkness research Khan?
16
Where were the advanced species and civilizations of ST:TOS during the war against the Borg?
15
Does the ghost ship from Star Trek: Voyager appear in Enterprise?
19
Why does Geordi keep calling the Romulan officer “Commodore”?
8
In Star Trek Headcanon: Human Edition, What is the reference about turning a sun into a torus?