I remember a story (by Asimov maybe?) about a future in which teaching in school is done through infusing the material into kids' brains?

One kid doesn't fit in life because his brain isn't assimilating the knowledge. At the end he finds where the books are created, and he goes on to write the books. 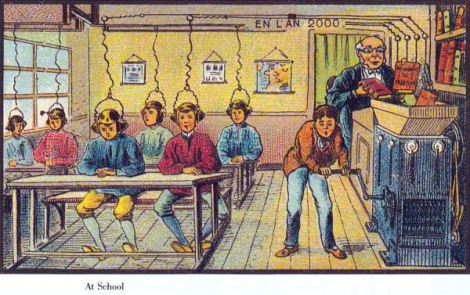 This seems to me to pretty clearly be the story Profession by Isaac Asimov.

I remember a story (by Asimov maybe?)

Yep, it's by Asimov.

about a future in which teaching in school is done through infusing the material into kids' brains?

To quote Wikipedia, the story is set in a society "in which children are educated by almost instantaneous direct computer/brain interface, a process known as taping".

One kid doesn't fit in life because his brain isn't assimilating the knowledge.

When the main character goes to get tested for which profession he will be "taped" to join, he isn't allowed to join any, and is instead sent to a "House for the Feeble Minded", because he is "unable to be educated".

At the end he finds where the books are created, and he goes on to write the books.

After the bulk of the story, the main character realizes that the tapes (and the knowledge on them) need to come from somewhere and that the "house for the feeble minded" actually is for the people who are creative enough to make the tapes. He is therefore someone who is truly innovative enough to create those tapes.

Not the answer you're looking for? Browse other questions tagged story-identification books isaac-asimov or ask your own question.

9
Book Ident.? About kids getting sucked into video game
5
Looking for 90s/2000s teen fantasy book about kids pulled into an RPG
16
Scifi novel with super-intelligent humans, interdimensional travel and a school for potential enhancees
3
1990's Choose your path kids story
9
1950 book series about human brains transferred into robots so that the Galaxy could be explored
10
Science fiction book series about aliens that look exactly like humans, protagonist tries to rescue her brother from a government camp ran by aliens
3
Short story about aliens with pneumatic brains
5
Story about 2 kids with magic books