What is the highest force self-propulsion performed in all of Star Wars?

From other questions here it has already been established that force users are able to use it to jump great heights and even fly, and perform all kinds of other "magical" feats. This got me wondering whether a force user could actually perform space travel travel just by "jumping" from one planet to another, using the force for maintaining correct propulsion and protection form hazards along the way, eschewing the need for a space craft.

The most obvious point that would need to be established first is whether it is actually technically possible for one to perform such a long jump, course correction notwithstanding. That leads to this question: What is the maximum known height(from the starting position on a planet or a planet-like body) that a force user has jumped or levitated. To disallow possible cheating due to a planet's immensely low gravity, let's multiply the height by planet's gravity relation to Earth's.

I am hoping to at least see examples of a force user going into near orbit.

I think the most powerful Force Push (at least in Legends) was done by Dorsk 81 when he pushed Admiral Daala's fleet out of a solar system. It required multiple Jedi and killed Dorsk in the process 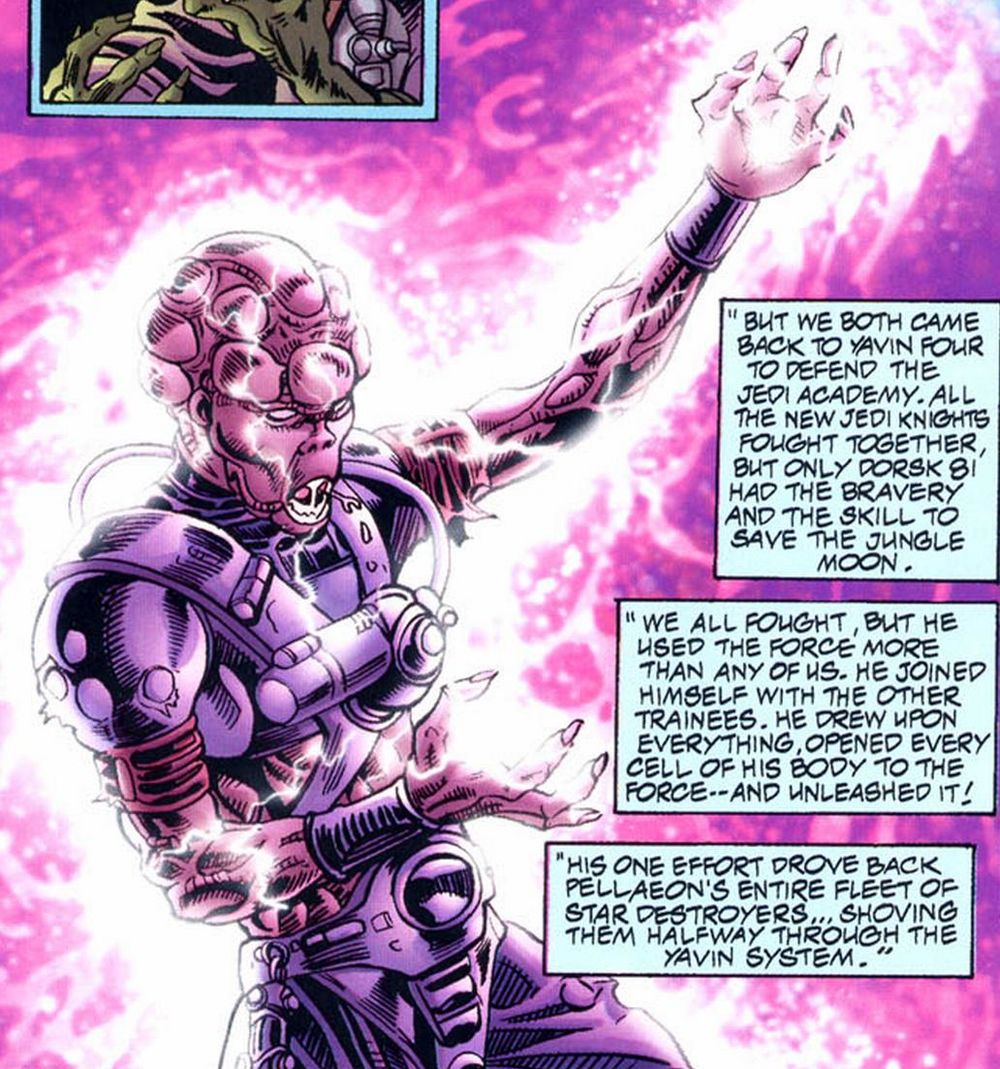 Arranging the Jedi on the outside points of the Grand Temple, Dorsk stood alone on the observation deck, atop a Force apex. All the Jedi channeled their power through him, and surrendering fully to the Force, Dorsk shoved the Star Destroyers end-over-end out of the star system in what possibly is the most powerful use of Force Push in recorded history. The enormous Force power flowing through him overpowered his body, burning through it and killing him. As Kyp raced up the temple to catch Dorsk, he uttered his final words: "They're gone, my friend".

I think the answer by Machavity is ultimately the right answer. It's hard to beat throwing an entire fleet of ships a sector away, which is what Dorsk-81 did in the novel "Champions of the Force". In that case, however, he was using the combined Force ability of several students, with himself as the conduit. The act also cost him dearly,

burning him out completely and ultimately killing him.

Other examples in Legends would have to include Luke Skywalker rebuilding Vader's fortress on Coruscant brick-by-brick, or the scene in "The Force Unleashed" where Starkiller crashes an Imperial-II Star Destroyer from the sky towards the end of the game.

The closest example to the scenario you mentioned - jumping through space - would probably be when Luke propels himself through space in the novel "Specter of the Past". Luke is on an asteroid base about to explode, with no way to get off. In order to reach a nearby ship, he uses a combination of Force push and physics to propel himself from the airlock to the ship. The trip takes long enough that he puts himself in a Force-induced hibernation to survive it.

Not the answer you're looking for? Browse other questions tagged star-wars star-wars-legends the-force powers or ask your own question.

60
Can the Force be used to fly?
27
Luke's neat “trick” at the end of Last Jedi, and consequences?