I'm trying to identify a book I read in the mid-2000's in English, which I'm fairly sure was the first in a trilogy. I remember very little of the overall story-arc, but a few scenes stand out:

I've done a bunch of key-word searches in google but am finding it very difficult to track down.

While I can't swear to it (not having read the stories), I think this might be the The Doomspell Trilogy. Summary of the first book, The Doomspell: 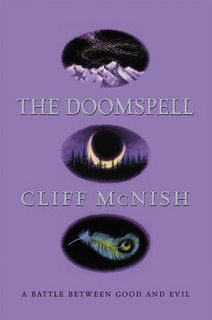 In The Doomspell, Rachel and, Eric are sucked into a freezing world called Itrea, by a witch called Dragwena. They meet a nice old man named Morpeth, who is over 500 years old and, like Rachel and Eric, was removed from Earth to someone by Dragwena. Rachel is fooled into believing that she is becoming a witch by Dragwena, and her Magic, trying to be helpful, tries to make her a witch. During the transformation, Dragwena lets Rachel inside her mind, giving Rachel access to the spells there. As Rachel's skills develop, she finds that she is more than a match for Dragwena. With the help of the Wizard Larpskendya, she kills Dragwena, and Larpskendya removes the spells making it snow. Morpeth then returns to Earth with Rachel and Eric.

TVTropes mentions tooth-cleaning spiders as part of being a High Witch:

The High Witches were bad enough, with their red skin, gigantic flappy noses, teeth-cleaning spiders and four moving and interchanging jaws, but holy shit the Griddas. Gigantic shielded eyes, brown fur, orange skin, five jaws (one on the back of their head) and claws.

And a quote about the tasteless chocolate sandwich from Google Books:

Rachel gingerly picked up one of the sandwiches and took a small bite.
"Yeuch!" She threw it on the table. "It tastes disgusting!"
Morpeth laughed out loud, big wrinkles creasing around his cheeks and mouth.
"It's not funny," Rachel said.
"Ah, but you forgot something else!"
"Did I? No, I'm sure-"
"You forgot to imagine what the sandwiches would taste like!"
"Oh." Rachel realized he was right. She quickly pictured the taste of mingled bread and chocolate and nibbled the edge. This time it was perfect.

5
Children's fantasy book that involved magic based in belief, and scarecrow style protectors
19
Book about magical siblings and 3 different worlds

5
A book about a girl who goes through a mirror to Atlantis
15
2000s fantasy book with a red-haired protagonist meeting companions from her previous life, including a troll
8
Fantasy children's-book, young girl with fey parentage, a few memorable descriptions
11
80s/90s fantasy book: female protagonist, demon-related magic, "knife"/"blade" in title...?
12
Fantasy/magic book with female protagonist and a misogynistic villain in a ringed city
4
Science Fiction / Fantasy book involving a young woman hired to read Tarot cards for a local lord, ends with her killing his brother for him