I read this years ago and thought the author was Robert Wasserman (or similar) but after extensive searching, can't find him having written the book I'm looking for.

The protagonist (her name is possibly Lea Kahn (or similar)) is shunned after her operation by everyone except a geeky boy who looks after her when she powers down during the school day etc.

She falls in with a group of similar robots, and starts developing feelings for the gang leader. The boy who used to look after her jumps off a cliff (or something) so he too can become like her, but is told the operation is not possible for him.

What is this book called, and who is it by? Help!

Lia Kahn is the protagonist of Skinned by Robin Wasserman. 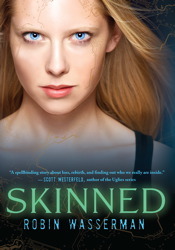 And it wasn't supposed to ruin her life.

Her nerdy friend who jumps from a great height but can't be given the operation is named Auden as per the character description on Wikipedia:

Auden - A social outcast, Auden is not a "designer baby" like the rest of his peers, because his mother didn't believe in "playing God." Due to a family history of mental illness, he is not eligible for download after jumping off a waterfall in an attempt to 'save' Lia (he forgot that she is nearly indestructible) leaves him gravely injured.

The "gang leader" is probably Jude.

Jude - A "mech" painted silver, with clear skin showing circuitry on his arm, Jude thinks Lia needs to let go of her "org" (organic) life and fully embrace the mechanical lifestyle. He was one of the first mech experiments, and is the ringleader of the group that lives at Quinn's.

The search that brought me there (albeit not the first set of terms I had plugged in) was book girl has her brain put in a robot.

6
YA Series about alive boy sent to ghost fantasy world by ghost to prevent him from being killed
13
Trying to find title of book where a robot has a bomb in it
3
YA book about a ghost boy and the attempt to put him to rest
9
Anime movie about space aliens and robots
3
Book where the main character falls from a tower in a field of wheat but is unharmed due to her being unconscious
5
Manga where the main character sees the group of heroes defeating the demon king, gets stabbed in the back and reborn into his younger self
6
Scifi book where boy finds he has telepathic/telekinetic power, becomes a slave and has to fight against others in arena as aliens champion/proxy
4
Manhwa where the main character is executed by her father and then wakes up a few days/months earlier