How did Anna pay for the goods at Wandering Oaken's Trading Post (and sauna)?

When Anna runs off to talk to Elsa she doesn't seem to have time to even dress appropriately for the cold, much less pack supplies and money just in case she needs to pick up something along the way. As the story unfolds it turns out that she does end up needing to shop for supplies along the way. Fortunately she encounter's Wandering Oaken's Trading Post (and sauna).

As you can see when Kristoff wants to purchase some items Oaken is upfront with the price for the goods. Due to Kristoff's rudness he is thrown out of the store. Next Oaken asks Anna if she wants more than the clothes and the boots. Anna hesitates and the scene cuts.

Do we know anything about how Anna acquires the goods from Oaken's store? I don't think she pulled "I don't need to pay because I'm the princess card" because Oaken only refers to Anna as "dear-y" so it isn't clear he knows she's the princess. Given that he threw Kristoff out for rude behavior I don't think Oaken would blindly accept Anna's claim that she should get free stuff based on her word that she's a princess. Furthermore it doesn't make sense to me that Anna had a bunch of money squirreled away in her dress somewhere when she went to the ball. Why would she carry cash when there is literally nothing to spend her money on.. The only other alternatives I can think of would be maybe Anna traded her fancy ball gown and slippers for the goods, or Oaken recognized her clothing as clothing of a noble so allowed her to take the goods on credit. While either of those options, or another, could conceivably work I'd like to know if this is addressed in any of the extended Disney works.

I'm willing to accept anything from kids books to references in Once Upon a Time, or basically anything else Disney had a hand in creating. Of course fan fiction type sources aren't legit.

In the movie Frozen Fever Oaken is seen giving Elsa a cold remedy of his own invention. By this time he clearly knows who both sisters are so the cold remedy could be a gift or added to the girls tab so I don't think this is necessarily relevant to Oaken's initial encounter with Anna.

Anna gave Wandering Oaken her coronation dress in exchange for the goods.

He has it on sale in Once Upon a Snowman. 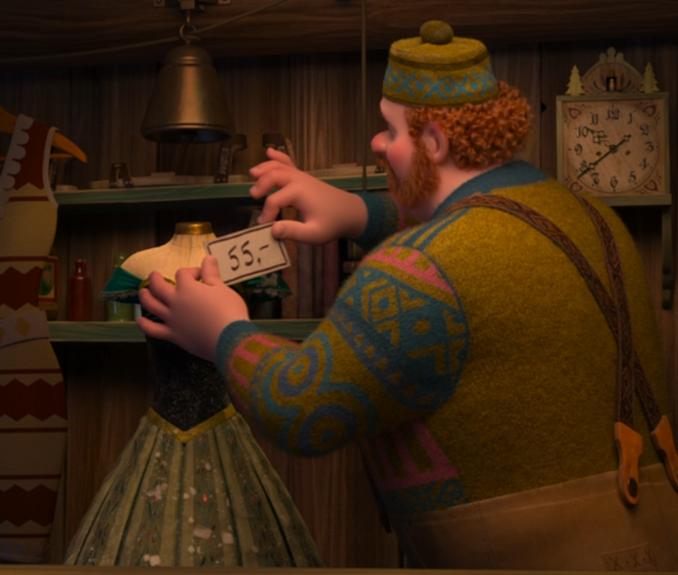 Note that the dress isn't being sold with the necklace which, presumably, she's still in possession of. He also, evidently, sold her a similar looking bodice to the one she was wearing previously.

When Anna first arrives at Oaken's, she is wearing a necklace with a large stone. The necklace is gone when she leaves the trading post, so maybe she was able to trade it along with her finer clothes.

Not the answer you're looking for? Browse other questions tagged frozen or ask your own question.

9
Where did the King and Queen get the idea to lock Elsa away?
27
Which kind of “ball” was Anna expecting for the ballroom?
5
Why did the Water Spirit destroy the ship when Elsa and Anna's parents were going to Ahtohallan?