I am trying to identify an animated TV show for children that I watched as a child (younger than 6) between 1980 and 1986 in the UK.

The opening of each episode set the back story for the central character - a little girl - who accidentally ends up on a rocket ship which is launched to another world. She possibly might be accompanied by either her dog or a cuddly toy, I am not sure - I vaguely remember it being her dog that escaped and got her trapped in the rocket while she chased after it.

The natives of the planet she lands on are generally friendly, and again vaguely I remember them having circular heads split into two (similar to the South Park baby). The environment is jungle like.

This is Robo Story (or Myrtille and the Robots)

Robo Story follows the adventures of a small, orange-haired girl called Myrtille and her dog Loufi. In the opening title sequence we see Myrtille chase the mischievous Loufi onto a space shuttle that takes off with her inside. The ship crash lands on a world known as the Green Planet.

The Green Planet is inhabited by robots. In the original French version these were the evil Rotors, and the friendly Robors. 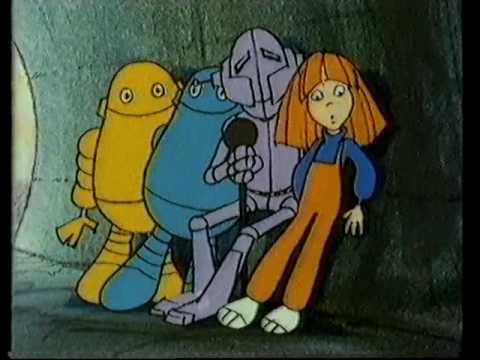 I loved this show when I was a kid, and would love to introduce my nephews and nieces to it.

Could be The Mysterious Cities of Gold , it came at 1982 and happens in the jungle.

10
Animated children's series where the 'baddies' were short and had Darth Vader-like helmets
8
Old cartoon with a red? robot in a desert and a girl

8
Animated fantasy show about a red-haired girl and two boys
8
Short story that takes place in post-apocalyptic Georgia, "civilization" lives inside geodesic dome cities?
12
Animated film about a group of people from a television show
8
Identify a short animated movie about a walking tree in red shoes
8
Kinda surreal sci-fi animated movie from before 1990 on an alien planet, maybe astronauts
4
Animated series about an inventor, a soldier, a monster and a girl
4
Animated children's show from the early 2000's - drink turns you into an alien
4
Animated TV show on VHS about winged people with powers solving problems