What makes the Whomping Willow so valuable to Snape?

At the start of Harry's second year, Harry and Ron arrived at Hogwarts in a flying Ford Anglia which crashed into the Whomping Willow.

Snape had several objections to this theatric arrival, his main one being that the boys damaged the tree:

"I noticed, in my search of the park, that considerable damage seems to have been done to a very valuable Whomping Willow,” Snape went on. “That tree did more damage to us than we—” Ron blurted out. “Silence!” snapped Snape again. ~Harry Potter and the Chamber of Secrets - Chapter 5: The Whomping Willow (emphasis mine)

The tree originally was put there to trap a student while he was in werewolf form. There is a better solution now, a potion called Wolfsbane, so the tree probably serves no purpose except occasionally whacking some first-years who wander too close, ignorant of its existence. Snape couldn't have seriously thought that damaging the tree would cause Dumbledore to expel Harry Potter, the boy wonder, the one Snape was tasked to protect.

“Well, you’re expelling us, aren’t you?” said Ron. Harry looked quickly at Dumbledore. “Not today, Mr. Weasley,” said Dumbledore. “But I must impress upon both of you the seriousness of what you have done.
"..."
Snape looked as though Christmas had been canceled. He cleared his throat and said, “Professor Dumbledore, these boys have flouted the Decree for the Restriction of Underage Wizardry, caused serious damage to an old and valuable tree — surely acts of this nature —”
~ibid (emphasis mine)

Strangely enough, Snape seems to think that these two offenses put together are severe enough to compel Dumbledore to actually expel Harry and seems disappointed that it is not so. Why is that?

One would think that the location where he was almost mauled to death by a werewolf wouldn't be so precious to Snape. The tree is a relatively new arrival, there are no long-standing Hogwarts traditions and stories about it, except Lupin's, so what makes the Whomping Willow so valuable? Was it a dig, aimed at Dumbledore for bringing dangerous things (werewolves and brutal trees) into Hogwarts?

Snape emphasized its value to get Harry in trouble.

Snape almost certainly didn't personally or emotionally value the Whomping Willow. He certainly wouldn't have positive associations with the place he was nearly attacked by a werewolf.

However, there are two things to consider. The first is, as a professor, Snape would have some idea of the "objective" value of school property even if he personally has negative associations with it. Him saying it's valuable could be referring to its objective value, not to its value to him. The second thing is, he wanted Harry and Ron to get some sort of punishment for what they did, and probably figured Dumbledore wouldn't be inclined to punish Harry. He didn't want them to get off lightly for flying the car to Hogwarts, so he made sure to emphasize all the reasons it was wrong.

The first time the mentions its value, it's in telling Harry and Ron what they did wrong, and making sure they know they're in BIG trouble.

“I noticed, in my search of the park, that considerable damage seems to have been done to a very valuable Whomping Willow,’ Snape went on.

‘That tree did more damage to us than we –’ Ron blurted out.”
- Harry Potter and the Chamber of Secrets, Chapter 5 (The Whomping Willow)

The second time he mentions how valuable the tree is, it's right after Snape finds out that Dumbledore isn't going to expel them (and probably suspects they'll get away with a very small punishment if any).

“Snape looked as though Christmas had been cancelled. He cleared his throat and said, ‘Professor Dumbledore, these boys have flouted the Decree for the Restriction of Underage Wizardry, caused serious damage to an old and valuable tree … surely acts of this nature …’

‘It will be for Professor McGonagall to decide on these boys’ punishments, Severus,’ said Dumbledore calmly. ‘They are in her house and are therefore her responsibility.”
- Harry Potter and the Chamber of Secrets, Chapter 5 (The Whomping Willow)

The Whomping Willow probably was valuable - it's likely rare.

It isn't really clear how rare Whomping Willows as a species are. The only indication is that Lockhart says his experience with exotic plants would make him good at tending to the Whomping Willow - but Lockhart is a liar and could have been saying he's met exotic plants to make himself seem more impressive, so that doesn't necessarily mean much. However, no Whomping Willow is mentioned other than the one at Hogwarts, so it's possible that they might be rare.

In addition, "valuable" might be used somewhat in reverse - not referring to the tree itself, but referring to how costly, time-consuming, or dangerous tending to its injuries might be.

“Professor Sprout’s arms were full of bandages, and with another twinge of guilt, Harry spotted the Whomping Willow in the distance, several of its branches now in slings.”
- Harry Potter and the Chamber of Secrets, Chapter 6 (Gilderoy Lockhart)

It is a rare, old tree, which presumably makes it valuable.

We see that they're rather 'exotic':

"Oh, hello there!" he called, beaming around at the assembled students. "Just been showing Professor Sprout the right way to doctor a Whomping Willow! But I don't want you running away with the idea that I'm better at Herbology than she is! I just happen to have met several of these exotic plants on my travels..."
Harry Potter and the Chamber of Secrets, chapter 6 (said by Prof. Lockhart)

So we know that they're rare. It's also fairly old; that we can see by the description of the tree:

Ron gasped, staring through the windshield, and Harry looked around just in time to see a branch as thick as a python smash into it. The tree they had hit was attacking them. Its trunk was bent almost double, and its gnarled boughs were pummeling every inch of the car it could reach.
Harry Potter and the Chamber of Secrets, chapter 5

So we have old and rare... and hiding a secret tunnel. This would make it fairly valuable, I'd say ;)

To my knowledge we aren't ever given a canonical answer - however it is likely valuable for similar reasons to the muggle equivalents: it's very old (which tends to lead humans to respect it) and presumably it's also rather rare since we don't see any others of its kind in either the books or the films and are only briefly mentioned in Chamber of Secrets and are specifically referred to as "exotic". Given the characters' reactions to the tree and its animated nature it would appear that they aren't something you see every day.

There is also the fact that the Whomping Willow effectively guards the entrance to the secret passage leading to the Shrieking Shack (and the passage's existence as well) - while it's debatable what value that provides to Snape himself at this point it's clearly something he is aware of from his time at school with the Marauders.

I read it rather differently from others, I guess.

Snape is basically a double agent, which puts him in a somewhat...strained position. On one hand, he's loyal to Dumbledore. On the other hand, a large part of his value is in his appearing that he's likely to revert to following Voldemort as soon as the chance arises.

To maintain that illusion, he does what he can to make sure the world knows that he despises Harry, and will harm him any way he can, any chance he gets. Nonetheless, he has to do so in a way that isn't too obvious--if he were to break the rules, anybody looking on would expect Dumbledore to fire him. This leads to one of two possibilities:

Therefore, he takes the middle path, so to speak--he acts strictly within the rules, so Dumbledore wouldn't have cause to fire him, but he also makes it apparent to anybody looking on that he's out to hurt Harry any chance he gets, even if the reason may be somewhat specious (or perhaps: especially if the reason is somewhat specious).

As such, it actually fits well with his role to exaggerate the value of the tree. Nobody can expect Dumbledore to fire him just for enforcing school rules. At the same time, if he makes it look like he's making excuses to attack Harry, that helps anybody in Voldemort's camp believe that he's still really a loyal Death Eater.

Clearly there are magical elements to Snape's reasoning here, but the answer might be simpler than you think: mature trees take decades to grow, and can be massive in size and extremely difficult to transport.

The value isn't just in the cost of the original sapling, it's in the decades it took to grow into its current state. Buying and transporting a fully mature tree can be extremely expensive.

I couldn't find a mature willow for sale, but here is a 54 foot tall Aleppo pine tree on sale for $19,000 (originally $27,000, shipping, unloading and installation not included): 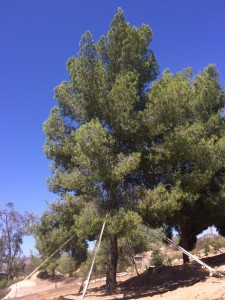 Presumably wizards would use more magical means of transport, but muggle tree moving companies have to use all kinds of specialized equipment to move large trees: 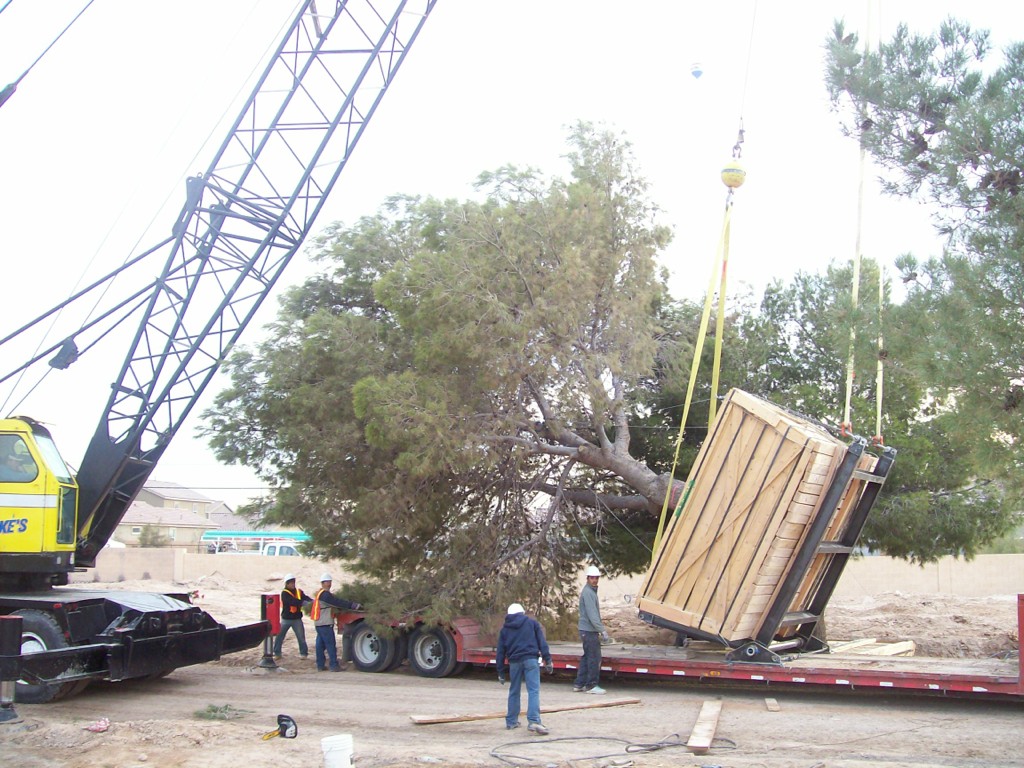 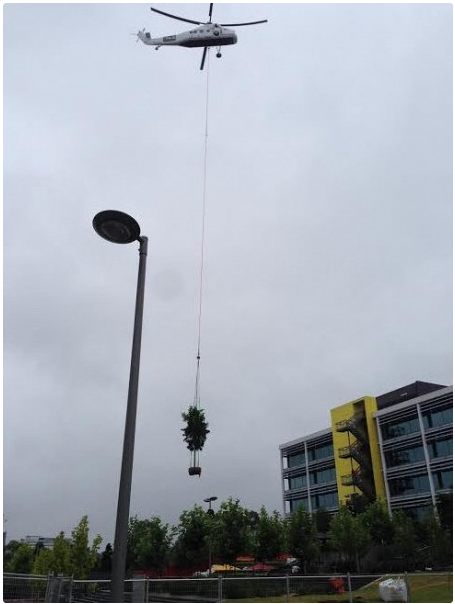 Destroyed trees can turn out to be extremely costly:

I agree with Bellatrix:

Snape emphasized its value to get Harry in trouble.

However, there is something I want to add on:

Snape would have thought it great to get Harry thrown out for the same reason he was almost likely expelled!

“They planted the Whomping Willow the same year that I arrived at Hogwarts. People used to play a game, trying to get near enough to touch the trunk. In the end, a boy called Davey Gudgeon nearly lost an eye, and we were forbidden to go near it. No broomstick would have a chance.”

But Snape went down anyway:

"anyway, Snape had seen me crossing the grounds with Madam Pomfrey one evening as she led me toward the Whomping Willow to transform. Sirius thought it would be — er — amusing, to tell Snape all he had to do was prod the knot on the tree trunk with a long stick, and he’d be able to get in after me. Well, of course, Snape tried it — if he’d got as far as this house, he’d have met a fully grown werewolf — but your father, who’d heard what Sirius had done, went after Snape and pulled him back, at great risk to his life… Snape glimpsed me, though, at the end of the tunnel. He was forbidden by Dumbledore to tell anybody, but from that time on he knew what I was…”

“They don’t use Dark Magic, though.” She dropped her voice. “And you’re being really ungrateful. I heard what happened the other night. You went sneaking down that tunnel by the Whomping Willow, and James Potter saved you from whatever’s down there—”

Thus, Snape was almost certainly threatened with expulsion for both this highly dangerous act and probably also for finding out Lupin's secret. He would have thought it great to get James' son expelled because the very tree that James almost got him expelled for.

8
Can wizards lift and move very heavy objects with magic?

17
Can Snape fly without metamorphosis?
13
What were Dumbledore's actual intentions for the Elder Wand?
6
Is the Whomping Willow enchanted?
46
How exactly is Gringotts secure?
55
How could Dumbledore hire Hagrid when he wasn't Headmaster?
13
Why didn't Sirius Black use the Shrieking Shack during Goblet of Fire?
22
Why are Hogwarts students threatened with expulsion so much?
7
What did Snape claim his source was about Harry's departure date?
41
Why did Dumbledore accept Lupin's resignation?